No more 10% Income Tax to the Burmese Embassy? 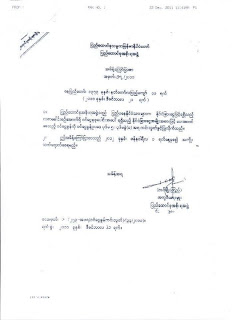 What a good news?

Now we don't need to pay that compulsory 10% tax to the Burmese Embassy whenever we need something official from our own embassy.

I still remember paying that dreadful 10% whenever I tried to renew my Burmese passport at the Bangkok embassy in Thailand. I've refused to continue paying that stupid tax in Australia since I was paying almost 45% income tax there.

So I am wondering what is the next step our new, so-called, semi-democratic Government of Burma will take? Will a wholesale general amnesty for all self-exiled Burmese abroad be too difficult legally?

In my humble opinion the simple legal solution for the permanent reconciliation is to allow dual citizenship for former Burmese nationals like me. And it is very doable as nowadays so many other countries including Australia allow the Dual Citizenship as everyone knows it is socially and economically beneficial for any country.

I wish the Burmese Government and the Parliament will legalize the dual citizenship very soon so that the patriotic sons and daughters of Burma could come back home and contribute for the development of their motherland with whatever capital and expertise they have acquired overseas.

For me, I am just looking forward to the day I could go home and die there in peace!