In Myanmar, a "sham" parliament stirs to life

(Reuters' Article by Jason Szep from Naypyidaw on Thursday 26 January 2012.) 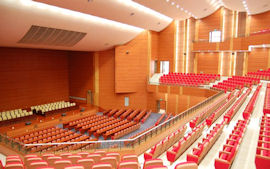 (Reuters) - In Myanmar's sprawling parliamentary complex, lawmakers flexed their newly democratic muscles on Thursday. Some drafted anti-graft legislation for one of the world's most corrupt nations or clamored for transparency on a typically secret national budget.

Others wanted answers from the government: why are train lines across the country woefully inefficient? Will the government move faster to revamp clearer foreign-exchange rate laws and hold companies to task for shabby infrastructure on state contracts?

Derided as a well-choreographed sham in one of the world's most authoritarian countries when it opened a year ago, Myanmar's parliament began a third session on Thursday with feisty stirrings of democracy, under pressure to accelerate economic and political reforms that could soon convince the West to lift decades-old sanctions.


The main legislation up for debate requires the government to seek parliamentary approval for its budget. That alone is a significant change for Myanmar, where past military regimes drew up spending plans in secrecy, often carving out largesse for the army, which handed power to a nominally civilian government in March last year.

In the cavernous hallways of the lower house and the gilded main legislative chamber, legislators expressed unvarnished views, including some scathing criticism of government policy by those in the opposition.
It wasn't always this way.

"When we first came to parliament, we were worried we might be arrested," said U Ba Shin, a member of the Rakhine Nationalities Development Party, a major ethnic party that won nine of the lower house's 440 seats in the first general election in two decades in November 2010.

"Now there is less fear among the people. But many people still don't know their rights or speak their minds in parliament. There is big room for improvement."

Myanmar's purpose-built capital, Naypyitaw, has been a curiosity since it was built from scratch seven years ago, a virtual fortress where the then-military rulers of the former Burma isolated themselves some 320 km (200 miles) from the largest city, Yangon.

Bestowed with manicured, heavily watered lawns and forbidding stone walls, Naypyitaw bears no resemblance to the rest of the country, one of Asia's poorest, including nearby villages of mostly thatched wooden huts. Parliament's 31 buildings with pagoda-style roofs are its main attraction. Its wide boulevards and streets are eerily quiet.

In addition to the lower house there is a 224-seat senate. There are also 14 assemblies spread across the country.

But changes inside the Hluttaw, or legislative chamber, are at the heart of the most dramatic reforms since the army took power in a 1962 coup and ushered in five decades of unbroken military rule that ended with the 2010 elections.


Shwe Mann, speaker of the house and a member of the military-backed dominant party that won the election, encouraged lawmakers to speak their minds on at least three occasions in the second session of parliament, from August 22 to November 25.

Shwe Mann's call for openness is in stark contrast to a year ago, when he was the powerful third-in-command of a much-feared junta that brutally crushed dissenting voices.

"He is trying very hard to put this democratic process in the parliament. He has been saying when we hold open voting 'You can openly show your opinion. Don't be scared'," said Sai Saung Si, 65, a member of parliament from northern Shan State and vice-chairman of the Shan Nationalities Development Party, that won 18 lower house seats in the election.

Sai Saung Si regularly voices the concerns of his constituency, including illegal seizures of land by companies or the army that went on for years unchecked.

"In the past, it would get taken away and people wouldn't know where to go to complain. But now we raise it in parliament. Seizing the land is not according to the law ... they must give it back to the people," he said in an interview.

Overtures by the government in recent months have included calls for peace with ethnic minority guerrilla groups, some tolerance of criticism, an easing of media controls, the legalization of labor unions and more communication with Nobel Peace Prize laureate Aung San Suu Kyi, who was released in 2010 after spending 15 of the past 20 years in detention.

But there is plenty of work to do and challenges ahead. Parliamentary politics is clearly a new phenomenon. Just ask the men in green.

Sitting on the right flank of the lower-house chamber are military men in fatigues. A quarter of lower house seats are reserved for the military.

And there are other conservative pockets of resistance to reforms, say legislators, although President Thein Sein stressed last week in an interview with the Washington Post that his government had "no intention to draw back" on reform.

"It is not at all impossible for the reforms to be reversed," said Sean Turnell, an economist at Macquarie University in Sydney who closely follows Myanmar.


"There are significant groups that are in opposition to some of the reforms but overall we are in a very much different space than we were only a matter of six months ago."

He described the first legislative session convened by the former military junta in January last year as "a mockery of a parliament." But there were flickers of change in the second session after the junta formally ceded power.

"The second session started to behave like a parliament. It was no longer a vehicle purely of the president or the military. It had a degree of independence. We are looking now to the third session to see which one was representative -- the first session or the second."

It is a crucial question for investors who see plenty of opportunities as Myanmar begins to opens up.

"Economic reform, if anything now, is beginning to lag behind the political reform," said Turnell, adding that investors were waiting for a long-overdue foreign investment-protection law to snake through parliament.

"We have yet to see it. I am a little bit worried about that. It is a law that needs to get through but there is still a little bit of debate about it.

"When something like that does pass, that will be quite a signal that real economic reform is under way."

Some see that change happening if Suu Kyi wins a seat in the lower house in April by-elections.

"When she comes to the parliament, if she raises one issue, and this issue is very beneficial to the country, then who will dare go against it?" said Sai Saung Si.

(Additional reporting by Aung Hla Tun; Editing by Martin Petty and Robert Birsel)
Posted by Hla Oo at 9:04 AM