(Daniel Greenfield’s article from the FRONTPAGE on 21 June 2015.)


A four-year-old boy is reported to be one of three people killed after an SUV ploughed into a crowd of people in Graz, Austria. Another 34 people were injured in the attack, with six - including two children - said to be in a serious condition.


Eyewitnesses say the driver rammed into crowds at up to 90mph before he got out and began randomly stabbing bystanders, which included the elderly and policemen. The three victims killed in the attack have been described as a 28-year-old Austrian man, a 25-year-old woman and a four-year-old boy. The woman and boy were both killed as the driver ploughed through crowds on the main Herrengasse shopping street before reaching the city's main square.

When Alen Rizvanovi plowed into a crowd in an SUV and then got out and began stabbing people with a large knife, the local media and authorities in Austria insisted that the Bosnian Muslim refugee was: A. Mentally ill, B. Reacting to a failing marriage, C. Operating under completely inexplicable motives.

Terrorism was loudly and vocally ruled out. The media made much of the fact that one of his victims was a fellow Bosnian Muslim running photos of Muslim women in hijabs holding up a photo of the dead man, though the women don’t appear to physically resemble either of the victims and it’s not clear if the woman was even wearing a Hijab at the time of the attack in which case the killer would not have been able to tell them apart from the natives.


Of course we don’t know at this stage Alen Rizvanović’s motives, but his actions were very similar to Muslim terror attacks carried out in Israel, which also involved running people over and then getting out and stabbing them.

A Facebook account registered to a man of the same name also living in Austria suggests that the killer was a devout Muslim. His favorite book appear to be Islamic texts. They include entries like Light of the Koran and the Hadiths of Mohammed.


More troublingly his likes include this Facebook page which promote Islamists like Mohamad al-Arefe who has been linked to Jihadists. The notorious Saudi cleric preached at a mosque accused of radicalising three young Britons fighting in Syria.

Although banned from entering Switzerland because of his extremist views, al-Arifi has visited the UK several times. A Sunni Muslim, he has been accused of stirring up tensions with the rival Shia sect, reportedly calling it evil and accusing adherents of kidnapping, cooking and skinning children. He was briefly arrested by the Saudis, banned from the UAE and from Switzerland for promoting beating women.

His views on abusing little girls are sick. In a talk show appearance, al- Arefe gave advice to victims of parental molestation, and urged family members to not call the authorities. According to al-Arefe, “The girl should not be left alone with her father nor should she wear provocative clothing around him.” And he’s all in on the Jihad.

In another YouTube video cited by the authors of the FDD report, Jonathan Schanzer and Steve Miller, al-Arefe advocates violence against non-Muslims. “Devotion to jihad for the sake of Allah, and the desire to shed blood, to smash skulls, and to sever limbs for the sake of Allah and in defense of His religion, is, undoubtedly, an honor for the believer,” the Muslim cleric says. “Allah said that if a man fights the infidels, the infidels will be unable to prepare to fight [the Muslims].”

Some skulls were probably smashed when Alen Rizvanović rammed his SUV into a crowd. Alen Rizvanović’s likes also include Naser Oric, a Bosnian war criminal, whom he liked twice. Also liked was Zakir Naik who had said, “Every Muslim should be a terrorist.”

While it’s not confirmed that this is the same man as the killer, since the latter’s photo has yet to appear in the media, if it is him, it shows that he was a strong believer in Islam and a fan of Islamists who called for Jihad against non-Muslims. The authorities have been quick to rule out an Islamic connection, but they may have spoken too soon. 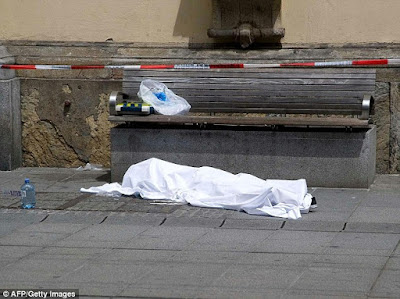 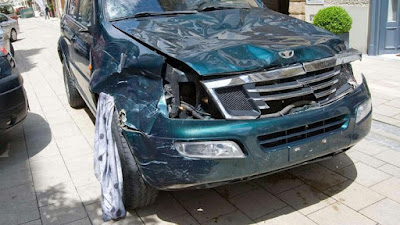 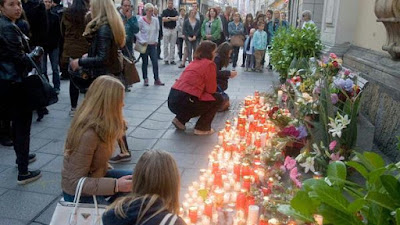 (Daniel Greenfield, a Shillman Journalism Fellow at the Freedom Center, is a New York writer focusing on radical Islam.)
Posted by Hla Oo at 8:25 PM