(Staff articles from the BBC NEWS in October 2017.) 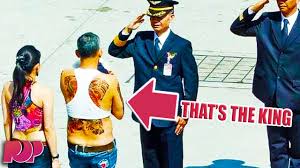 Lese-majeste explained: How Thailand forbids insult of its royalty. Thailand's lese-majeste law, which forbids the insult of the monarchy, is among the strictest in the world. It has been increasingly enforced ever since the Thai military took power in 2014 in a coup, and many people have been punished with harsh jail sentences.

Critics say the military-backed government uses the law to clamp down on free speech, and the United Nations has repeatedly called on Thailand to amend it. But the government says the law is necessary to protect the monarchy, which is widely revered in Thailand.

What exactly is this law? Article 112 of Thailand's criminal code says anyone who "defames, insults or threatens the king, the queen, the heir-apparent or the regent" will be punished with a jail term between three and 15 years. This law has remained virtually unchanged since the creation of the country's first criminal code in 1908, although the penalty was toughened in 1976.

The ruling has also been enshrined in all of Thailand's recent constitutions, which state: "The King shall be enthroned in a position of revered worship and shall not be violated. No person shall expose the King to any sort of accusation or action."

However, there is no definition of what constitutes an insult to the monarchy, and critics say this gives the authorities leeway to interpret the law in a very broad way. Lese-majeste complaints can be filed by anyone, against anyone, and they must always be formally investigated by the police.

Those arrested can be denied bail and some are held for long periods in pre-trial detention, the UN has said. Correspondents say trials are routinely held in closed session, often in military courts where defendants' rights are limited.

The jail penalty also applies to each charge of lese-majeste, which means that those charged with multiple offences can face extremely long jail terms. In June 2017, a man was sentenced to 70 years in jail in the heaviest sentence ever handed down, though it was later halved when he confessed.

Why does Thailand have this law?

The monarch plays a central in Thai society. King Bhumibol Adulyadej, who died in October 2016 after seven decades on the throne, was widely revered and sometimes treated as a god-like figure. He has been succeeded by his son, Maha Vajiralongkorn, who does not enjoy the same level of popularity but is still accorded a sacrosanct status in Thailand.

The military, which overthrew the civilian government in May 2014, is staunchly royalist. Prime Minister Prayuth Chan-ocha has stressed that the lese-majeste law is needed to protect the royals. One of the justifications for a previous military coup in 2006 was that the prime minister then, Thaksin Shinawatra, was undermining the institution of the monarchy - an allegation he vehemently denies.

How has it been used?

Though the law has been around for a long while, the number of prosecutions has risen and penalties have grown more severe since the military took power. The UN's High Commissioner for Human Rights says the number of people investigated for lese-majeste has risen to more than double the number investigated in the previous 12 years. Only 4% of those charged in 2016 were acquitted.

There has been a wide range of offenders, from a grandfather who sent text messages deemed insulting to the queen, to a Swiss national who drunkenly spray-painted posters of the late king. People have also been arrested for lese-majeste over online activity, such as posting images on Facebook of the late King Bhumibol's favourite dog, and clicking the "like" button on Facebook on posts deemed offensive.

The social network in fact faced a ban in Thailand in May 2017 for failing to block illegal content including alleged lese-majeste posts, although authorities later backed off. Human rights groups say the government wields the law as a political tool to stifle critical speech, particularly online. The legislation, says Amnesty International, has been used to "silence peaceful dissent and jail prisoners of conscience".

In February 2017, the UN's special rapporteur on the promotion of opinion and expression, David Kaye, said "the fact that some forms of expression are considered to be insulting to a public figure is not sufficient to justify restrictions or penalties". He called for a repeal of the law, saying that "lese-majeste provisions have no place in a democratic country". 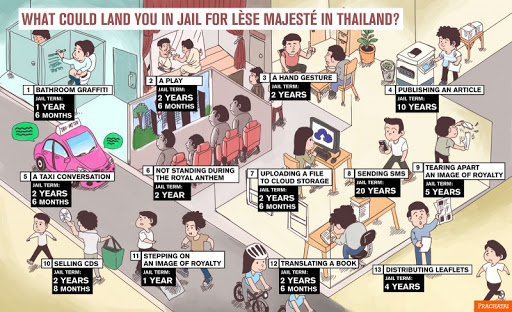 Many ways to get arrested for lese-majeste inThailand

A man in Thailand faces up to 15 years in prison for posting images on Facebook of King Bhumibol Adulyadej's favourite dog in a way that mocked the king, a prosecutor in the military court said.

He was charged under the notoriously sweeping lese-majeste law. After last year's coup, the ultra-royalist military has demanded ever tougher enforcement of it. This has led to many different and sometimes unexpected ways of falling foul of the law.

The crime of insulting the monarch dates back in Thailand to the early 19th Century, when the unlucky accused could be punished by beheading, having their ears, hands and feet cut off or, for milder infractions, be imprisoned for a month and made to cut grass for the royal elephants.

The modern concept of lese-majeste was incorporated into Thailand's first criminal code in 1908, and in its current form as the notorious Article 112, in 1956. It states that "whoever defames, insults or threatens the king, queen, heir apparent, or regent shall be punished with imprisonment of three to 15 years."

No mention there of dogs, or any other royal pets. But ever since the start of Thailand's intractable political crisis in 2006, the number of lese-majeste prosecutions has risen sharply, as has the severity of punishments, and the breadth of interpretation of what constitutes royal defamation. 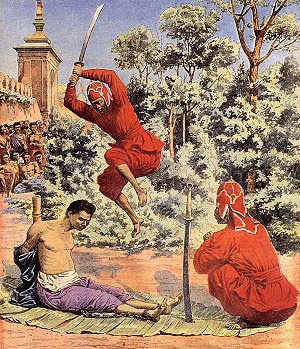 Here are a few examples.

1. Saying anything negative about the monarchy to passengers in a car: Last August, a taxi driver was jailed for two and a half years after a passenger recorded his comments on a mobile phone and handed them to the police.

2. Staging a university play featuring a fictional one-eyed king: In February, two students were jailed for two and a half years for performing a play called The Wolf's Bride a year earlier, which the court judged to have parodied King Bhumibol, who lost an eye as a young man in a car accident.

3. Writing a novel featuring characters that resemble members of the Thai royal family: In August 2008, Australian Harry Nicolaides was arrested at Bangkok airport as he prepared to board a flight. Nicolaides was eventually pardoned.

He was unaware of an arrest warrant issued over his self-published novel which had included a fictional crown prince with a dissolute lifestyle. He was sentenced to three years in prison, but quickly pardoned. He says he only sold seven copies of the book. But he did send a copy to the palace to ask for approval, and when he received no reply, assumed he had got it. 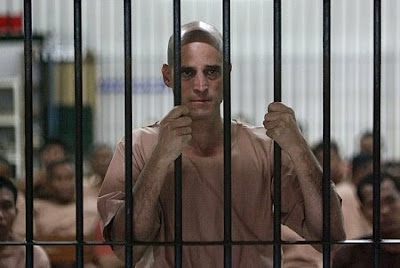 4. Sending text messages critical of the monarchy to politicians: In November 2011, 63-year-old Ampon Tangnoppakul was jailed for 20 years over text messages sent to the secretary of then Prime Minister Abhisit Vejjajiva, despite his poor health and insistence he had not sent the offending texts. He died the following year in prison.

5. 'Liking' anything critical of the monarchy on Facebook: Online thumbs-up could prove troublesome in Thailand. Last week, 27-year-old factory worker Thanakorn Siripaiboon - the man who was arrested for mocking the king's dog - was also charged under Article 112 for another alleged offence: clicking the 'like' button on Facebook next to a doctored photo of King Bhumibol.

6. Referring to anything from Thailand's history that could be construed as damaging the monarchy's image: In 2007, a local politician was sentenced to two years in prison for talking on a radio programme about slavery during the reign of King Mongkut (1851-1868).

In May last year, the Supreme Court upheld the verdict, stating that defaming past monarchs also damaged the present king, despite the fact that slavery did exist in Thailand then. Truth is no defence in Thai defamation cases.

7. Questioning an elephant battle: In October last year, two retired military officers filed a complaint of lese-majeste against renowned social critic Sulak Sivaraksa because he cited academic research which questioned whether a famous elephant battle, led by the 16th Century King Naresuan, had actually taken place. The police investigating Sulak have said they believe he has defamed the monarchy. This is the fifth time he has faced a lese-majeste charge. 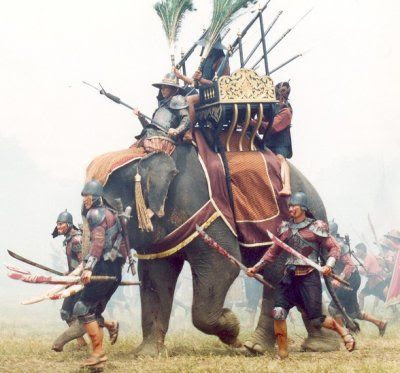 8. Having a row with your brother: In 2012, Yuthapoom Martnok was charged with lese-majeste and jailed after his brother filed a complaint. He was released nearly a year later when it was discovered there were no grounds for the charge, and that the brothers had in fact fallen out over fights between their dogs.

This case illustrated two problematic aspects of Article 112. First, that anyone can file a complaint against anyone else, and the police have to start a formal, and often secretive, investigation, no matter how flimsy the evidence. Second, that defendants rarely get bail, so they are jailed awaiting trial, which can take years in Thailand. Many cases are heard in camera, so no reporting of proceedings is possible. Since the coup, most lese-majeste cases are heard in military courts, whose verdicts allow no appeal.

9. Failing to take down offending messages from a website: In May 2012, Chiranuch Premchaiporn, editor of the news website Prachathai, was given an eight-month suspended sentence for failing to remove comments from the site quickly enough. She had removed some after 10 days, but others had stayed up for 20.

10. Using the name of Crown Prince Vajiralongkorn to raise funds: Over the past year, a slew of lese-majeste charges has been filed against people formerly linked to the heir to the Thai throne. Nine family members of the prince's estranged wife were charged last year with citing his name to extort money, and given long prison sentences. One police officer also involved died mysteriously in custody after apparently falling from a high window.

In October this year, three men, including a famous fortune-teller, were charged under Article 112 for using the prince's name to persuade donors to pay for promotional products tied to a bicycle ride honouring the royal family. Two of the three died in custody.

11. Singing satirical songs about the royal family: Nithiwat Wannasiri was once a follower of the royalist yellow-shirt movement, but switched to the red-shirt side in 2010, forming a band called Fai Yen, or Cool Fire. They specialised in songs that mocked the lese-majeste law and members of the royal family, performing openly around Bangkok until the coup. Nithiwat has since been charged under article 112, and is living in exile, along with hundreds of other Thais fleeing military rule. 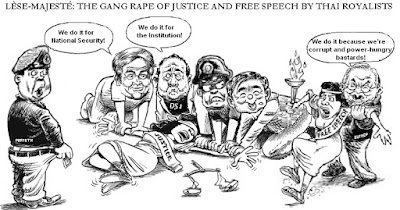