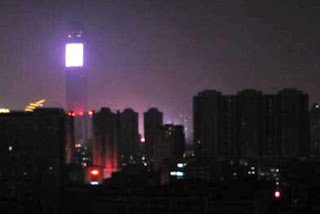 By November, more than 60 vessels carrying Australian thermal coal were held up in Chinese waters because they weren't able to offload their cargo, according to Bloomberg shipping analysis data. So do China's recent energy woes have anything to do with its sanctions on Australia, or is it just an awkward coincidence? What's happened?

Residents of Hunan and Zhejiang have been issued notices stipulating the "orderly use of electricity", along with other power restrictions that haven't been seen for a long time, according to local media reports.

The restrictions have come during a particularly cold Chinese winter, where millions of people have switched on energy-intensive heating to cope with sub-zero temperatures. Temperatures in Zhejiang plummet around this time of year, with daily average lows of 3 degrees Celsius in December — in January, the mercury usually doesn't rise above 8 degrees.

According to China's state-owned broadcaster CCTV, lights and lifts in some office buildings were shut off in a several cities across Hunan and Zhejiang. The power outages forced some office workers in Hunan's city of Changsha to climb 20 to 30 flights of stairs, according to a report in the local news publication iFeng.

Social media users in the city of Yiwu in Zhejiang made similar complaints. "The office room is freezing cold after the aircon is turned off … Now the lift is shut off," one resident wrote on Weibo. "[Climbing stairs] almost killed me this morning." Changsha residents have also been advised against using energy-intensive appliances such as electric stoves and ovens, and not to set air conditioners above 20 degrees.

The ABC has also seen an online notice to a middle school in Zhejiang, banning staff and students from turning on heating if temperatures exceeded 3 degrees. Do we know what's causing the power pinch?

In Hunan, authorities said the province of more than 67 million people had reached the electricity grid's maximum load, with a predicted gap of 3 million to 4 million kilowatts of energy during winter's peak period, according to local media.

"This year's situation is quite special. One is that winter comes earlier and the weather is relatively cold," a spokesperson for Changsha's Development and Reform Commission told China's Cover News this week. "Then our coal supply in Hunan Province is also insufficient. For various reasons, the power supply is now relatively tight."

This was again stated by a spokesperson for the Changsha Power Supply Company, who said Hunan's power pinch was partly due to the cold, and partly due to a drop in energy production capacity.

Wu Donglin said the latter comprised of "the reduction of coal burning, the decline of reservoir water levels, and the inability of wind power to generate electricity" because of freezing temperatures.

The threat from within: China has pledged to become carbon-neutral by 2060, responding to the need to drastically bring down its overwhelming share of global carbon emissions. Experts say it's also critical for the communist party's survival.

Mr Wu's comments came after an editorial published in the state-owned Global Times tabloid claimed Beijing was preparing to let power producers import coal from several countries without restrictions, "except for Australia".

China's coal imports on the whole have been on a downward trajectory according to official Government statistics — in other words, it's not just Australian coal that has been having trouble entering China's market.

So is the ban on Australian coal to blame? Shane Oliver, AMP Capital's chief economist, told the ABC it was quite possible that the power cuts had a link to the coal ban, but that it was impossible to know for sure.

"The disruption to the supply of coal into China as a result of the bans on Australia may also be playing a role in that and causing rationing," he said. "It is quite normal to have cold winters at this time of the year in China, so one would assume that's been allowed for."

However he said it was premature to assume China's trade tactics against Australia had backfired. "I think all countries which engage in trade wars tend to pay some price for it," Dr Oliver said.

Jun Mao, a thermal coal analyst at Jiangsu Jinying Capital Management, told the ABC the power shortages were a sign of supply and demand issues in China. "China's thermal coal stocks are insufficient and the price is relatively high. But it hasn't been completely out of control," he said. "The Chinese Government is already coordinating, and I think the problem will be resolved soon."

Mr Mao said he believed the power shortages had "some connection" to China's ban on Australian thermal coal, but that it was "not the main reason". "It is also related to some domestic factors, which have impacted on the shortage of thermal coal," he said.

Hu Xijin, editor of the Global Times, wrote on social media that it was "nonsense" to link China's power shortage to the ban on Australian coal. He said the ban had a "subtle impact" on China's electricity supply, because "the coal imported from Australia is mainly coking coal and China has rich resources of thermal coal". "The claim that the Australia policy hurts ourselves is a malicious fabrication by foreign forces and some people in our country," Mr Hu wrote.

How much energy does China use? While the country is the largest consumer and investor in renewable energy, it is also by far the largest consumer of coal on the planet. This makes it the world's largest emitter of greenhouse gases, while also being a renewables superpower committed to being carbon neutral by 2060.

But coal is still largely responsible for keeping the lights on across China, where energy consumption has skyrocketed in recent years. Data from the International Energy Agency showed that in 2018, China consumed more than 6,800 terawatt hours of energy, which eclipsed the total energy consumption for all of North America in that year. On Wednesday, a spokesperson for China's National Development and Reform Commission said China's year-on-year electricity consumption increased by 9.4 per cent last month.

The slowdown in Australian coal exports to China began to emerge in September, with ships carrying Australian coal barred from offloading their cargo at Chinese ports. This month, no ships carrying thermal coal from Newcastle — Australia's busiest coal port — have left for China, and none are scheduled to leave before Christmas.

Ground to a halt: Normally one in five coal ships leaving the Port of Newcastle are bound for China. The latest shipping schedule reveals that number is now zero. As this trade appears to have been effectively cut off by China, it joins an ever-growing list of Chinese sanctions against Australian imports amid a worsening geopolitical stoush.

Beijing laid some of its issues with Canberra officially in November, delivering a list of 14 "grievances" that noted Australia's "anti-China" government-funded research at the Australian Strategic Policy Institute (ASPI), "interference" in China's internal affairs regarding Hong Kong, Taiwan and Xinjiang, and ban of Huawei from the construction of Australia's 5G network.

Alongside trade, Australian diplomats and ministers have had their contacts with Chinese officials frozen, and Australian calls for a dialogue with China have been left unanswered.

More than 60 ships carrying Australian coal have been stranded at sea – some for months – while waiting to enter Chinese ports, according to analysts, with the Morrison government being urged to clarify the long delays.

Dozens of vessels are being kept waiting, according to the global commodity and energy price reporting agency Argus, which has been tracking the situation. An Argus representative told Guardian Australia some of those vessels left Australia as long ago as May and many had been waiting in Chinese waters since September.

Beijing appeared to be “singling out Australian coking coal imports”, Argus said, with 86% of the coking coal waiting outside the Chinese ports of Jingtang and Caofeidian coming from Australia.

The details come after Bloomberg reported 66 vessels loaded with Australian coal were positioned in Chinese waters, including 53 that had been waiting about four weeks or longer to offload the material at China’s ports.

The Guardian has identified several bulk carriers anchored off the Chinese coast which left the Queensland ports of Hay Point, Gladstone and Abbott Point months ago for the two- to three-week journey. Few other nearby ships, which have not come from Australia, had been anchored for longer than a month. The ships are sailing under the flags of numerous countries, including China. One of them, the Jag Anand, left Gladstone on 26 May and has barely moved in recent weeks.

The developments raise concern that Australian coal may have been targeted as part of a range of trade actions taken by Beijing over the course of this year, amid tensions in the diplomatic relationship.