Today Myanmah-ahlin Newspaper has officially confirmed for the very first time the ultimate winner of deadly power struggle among the next generation younger generals of Burmese Army. The winner is Min Aung Hlaing who was reported very first time in his new rank as the General, no longer a Lt. General. In the news he was accompanying SG Than Shwe inspecting the 48th Gem and Precious Stones Emporium held in Nay-pyi-daw.

Only 54 years old he is relatively very young for his position and I am afraid we'll be seeing a lot of him at the epicenter of Burmese politics for a long time. I have known him since our high school days together at the Central Boys High (State High School No. 1 Latha) in Rangoon and, this one I have to add seriously, he has a very attractive kid sister.

He is a decent man and a capable officer and an efficient administrator and I wish him good luck in reforming our extremely-poor Burma into a decent democracy and thriving economy. This is a short biography of him and the translated extract of one of his writings.

Min Aung Hlaing basically grew up in the middle of Rangoon. His father U Khin Hlaing, a good friend of my parents, worked as an engineering official for the Government Construction Corporation and they used to live in a large comfortable apartment directly opposite the Central Fire Station on the Sule Pagoda Road in Central Rangoon.

After his matriculation from the Central Boys High in March 1972 he became a Law major student in RASU (Rangoon Arts and Science University). While he was a Third Year Law student and a  seasoned Corporal of UTC (University Training Corps) he was admitted into the Intake 19 of DSA (Defense Services Academy) in Maymyo (Pyin-oo-lwin Town) in January 1974. He graduated from DSA in December 1977 and became a Second Lieutenant in Burmese Army.

His early postings as a junior officer and later a mid-ranking officer were mostly in the infantry battalions of famous LID-88 (Light Infantry Division 88). The Divisional Commanding Officer of LID-88 in early 1980s was Colonel Than Shwe who eventually became the Senior General and the Chairman of SLORC (State Law and Order Restoration Council) which was renamed later SPDC (State Peace and Development Council).

My dear friend Min Aung Hlaing has always had the reputation as a brave fighter and a no-nonsense straight talker. He truly is a battle-hardened warrior of brutal Burmese Army. He is also a serious scholar and a gentleman too.

He finally became a Brigadier General and the Commanding Officer of LID 44 based in Kyaikhto in Mon State. August 2003 saw him transferred to DSA as the 19th Rector. After three years in DSA he was promoted to a Major General and the CO of Burmese Army Western Regional Command (Na-pa-kha) controlling the Arakan State bordering Bangladesh.

He was moved to the hot spot of Golden Triangle as the Commanding Officer of Triangle Regional Command in 2008 and eventually promoted in early 2009 to a Lt. General and  Chief of the Second Bureau of Special Operations (BSO 2) controlling three Regional Army Commands (Northeastern, Eastern, and Triangle regional military commands).

There he led the successful military operations against the National democratic Alliance Army (NDAA) in the Kokang area of Shan State in August 2009.

He became the acting joint chief of staff of the army, navy, and air force in June 2010 and now he is the General Commander-in-Chief of Burmese Armed Forces.

This is the translated extracts of his article “From Past and Present to the Future” written as the Rector of DSA in the DSA Golden Jubilee Magazine in August 2004.

“August 25 of 2003 in the town of Kyaikhto. Rain was coming down heavily that day. My Division was back from the field operations and in the middle of reorganizing and training.

I was in a meeting discussing a regional development project when my General Staff Officer came in and reported to me that I was just transferred to DSA as the Rector.

The order had just come out and I was surprised and at the same time really happy with my new posting. Even though I was born and raised by my natural mother I was reborn again in DSA and given a chance by DSA to serve in various levels of the army.

Was it the unexpected great opportunity for me to serve at this great academy producing the future generations of army officers? Unexpected twist of my fate? From a warrior-Divisional Commander to the gardener-Rector nurturing new generations!

I arrived at DSA on 31st August and the first thing I immediately noticed were the Cadet Statue at the main gate and the two-lane, wide asphalt road into the huge Campus. And there was a wide six-lane asphalt road to the Cadet Dormitories. Back when I was in the DSA intake 19 during 1974-77 that road was just a narrow ordinary road.

And the graduating parade ground then was just a grassy ground with small timber podium. Now the 1500 ft long and 500 ft wide parade ground had a velvet-green grass surface with the giant DSA emblem at one end and the 4,500 guest-capacity stand for the dignitaries and the attending families of the graduating cadets at the front. DSA had changed a lot since I was here last in 1977.

Established on the 1st August 1954 the DSA is now 50 years young. While thinking about the past I also believe that the progressive changes in the present will build the strong and capable modern Army for the future. Together with that army we have the national political tasks in our hands to build a peaceful and modern developed nation. And I believe we will march ahead with that nation building duty on our shoulders.”

Now you are the Chief of Burmese Army and you can do what you have promised yourself to do all your life since we were very young. To rebuild Burma into a peaceful, prosperous modern nation. The whole brand new Burma for all of us!

(First of the following videos was General Min Aung Hlaing at the Burmese army's annual war game and the second was him inspecting the operation of military's Groundsheet and Boot Factory in the town of Meikhtila.)


When I first saw these videos they horribly reminded me of Ne Win's televised inspections of state-owned factories during the eighties. Min Aung Hlaing now seems to have a serious concern for his personal safety and the evidence is his uzi-totting bodyguards in full body-armour following him and closely guarding him even in an army facility.

I just hope and pray that my old friend is not abandoning his noble ideals and turning into a paranoid-tyrant like that bastard Ne Win we all hate.

Today Myanmah Ahlin newspaper printed Min Aung Hlaing's new rank very first time as Vice-Senior-General instead of just General.  So who is the Senior General? Hopefully not old SG Than Shwe. Also just look at the following photos. MAH seems officially placing himself at the No.4 of Burmese Government hierarchy.


-----------------------------------------8 March 2022 Update---------------------------------------Motherfucker has completely gone mad since February 2021 coup. He has been killing children in tens of thousands all over the country for no reason at all, apart from his mad desire to obtain absolute power at all cost.
Burma's economy has since collapsed and the whole country is in the tight grip of mad civil war even the battle-hardened Burmese had never seen before in their fucking hellish lives. What happened to the once-decent guy I knew since my childhood.
Absolute power had gone into his fucking head and he has gone absolutely mad. I hope people of Burma will eventually punish him with what he deserve, a hangman noose. What will happen to his family at the end? I feel sorry for them as the end of Min Aung Hlaing will bring their ends too! 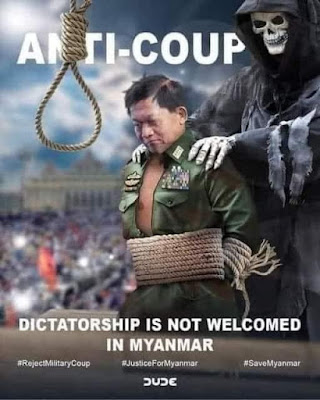 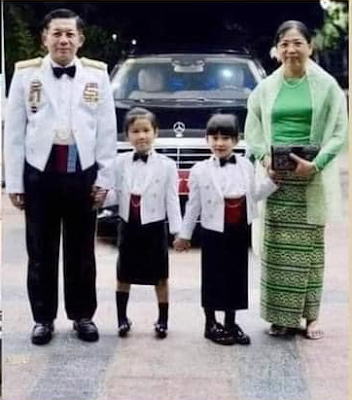 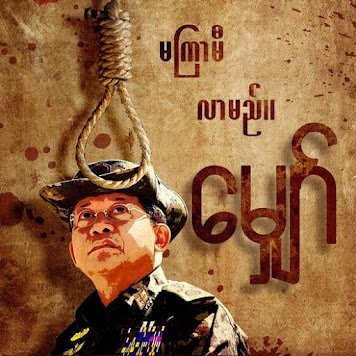