U Win Myint from Sagaing Region Constituency (3) stated that the West Bloc countries has been gradually tightening their economic sanctions against Burma since 1997 and thus considerably slowing down nation’s economic growth and harming the ordinary people as the undeniable result.
Due to economic sanctions, he added, there are bad consequences such as considerable slowing down of Burma’s foreign trade, diminishing FDI (Foreign Direct Investment), receiving the least ODA (Official Development Assistance) among the developing countries, receiving no monetary and financial assistance from the international financial organizations (World Bank, IMF, and ADB), the substantial drop of labor-intensive industries, and the minimal growth in tourism and hotel industries.
The economic sanctions widely and adversely affected the export-oriented industries. Burma used to trade widely with the world around 1990 but now because of the sanctions, he added, Burma mainly trades with Asian countries only. However, there has been a marked increase in trade with Asian countries as Burma’s trade with western countries dwindles.
From 878 million US$ worth in 1987-88 Burma’s trade with Asia grew substantially to over 12 billion US$ in 2009-2010. The contribution to trade with Europe and America declined sharply from 30% of Burma’s total trade in 1990 to only 5% in 2010.
Because of economic sanctions Burmese exports lose the world market and our exporters face the severe difficulties in payments and transfer of money for international trade. Costly and time consuming efforts to overcome these difficulties also harm the competitiveness of Burma’s exports.
Since economic sanctions hinder the growth of exports and hence the growth of industry producing exports it seriously affect the development of nation, private businesses, and majority of the working class. Furthermore, economic sanctions and trade embargos are grossly violating the fundamental principle of WTO the freer international trade, and so by this discussion he supported U Htay Oo’s proposal, he said.
Sanctions harm Owners and Workers all together! U Thein Nyunt of Rangoon Division Thingangyun Constituency said that because of the economic sanctions imposed by US, EU, and Canada the trade embargo harms both employees and employers and at the same time the financial embargo hampered the money transfers.
He added that the rich natural resources alone do not provide necessary ground for national development. Investment, technology transfer, and human resources to utilize that technology are required for establishing the industries and the businesses. Economic sanctions basically prevent Foreign Direct Investment. Therefore in the interest of the nation he supports U Htay Oo’s motion.
But instead of tackling the sanctions problem with emotional sovereign pride, he suggested, a skillfully clever foreign policy is required to address the issue. As their own economic sanctions also have adverse results on the West Bloc these countries are now reconsidering their sanctions.
The ASEAN countries are also demanding to lift the sanctions and in these opportune situations, he suggested, a wise foreign policy should be carefully considered to persuade the West Bloc to lift their sanctions.
Sanctions harm the Ethnic States!

U Htun Aung Kyaw from Arakan State Ponnagyun Constituency said that the economic sanctions imposed on Burma for the sole purpose of influencing the political development for whatever reason undeniably harm the nation’s economy especially the economies of the states which really need the economic development.
Since 1997 the US Government has imposed economic sanctions against Burma exercising the Customs and Trade Act. The Freedom and Democracy Act was passed in 2003 and it brought in harsher sanctions against us. European Union also followed US and placed embargo on timber products and gems exports from Burma in addition to prohibiting the money transfers. Some other Western countries also imposed sanctions like US and EU.
The international sanctions have damaged the fishery industry and the finished-timber- products industry from all the states and divisions including the Arakan State. The tourist hotels, handicraft industry, and travel businesses relying on the Myauk-U archaeological site and Ngapali Beach resort in Arakan State have also been severely affected.
In 2003 Burma ranked the fourth among the Asian countries exporting marine products to the US. Prawn farms in Arakan State had reaped the benefits from the marine exports. But due to the trade embargo the prawn farming businesses suffer as the prawn meat exports are blocked.
Since 2010 the political parties have been allowed to establish in Union of Myanmar and the multi-party election was held. We have taken the first democratic step towards a parliament democracy. Therefore, the US and EU countries should accept the positive political progress happening now in our country and thus lift the financial and economic sanctions as a positive response on the immense struggle of our people, he said.
He concluded by saying that he wholeheartedly supported U Htay Oo’s motion.
Women have taken the full brunt of the Sanctions! 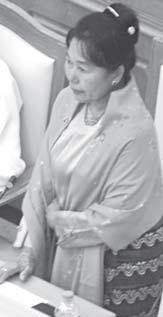 Dr. Daw Myat Myat Ohn Khin of Irrawaddy Division Constituency (10) said that in Burma there is no official sexual discrimination between male and female as the State has been laying down various laws and acts to provide equal opportunities for the females. In the other hand everyone here knows that our women enjoy their due rights as the State has various laws and acts to protect the weaker sex.
Even in this great Union Parliament I can see happily with pride that here with me are many women parliamentarians and most of us have been assigned into the important parliamentary committees, she added.
Since 1988, as the market economic system was being introduced, many women got skilled and non-skilled jobs in accordance with their skills in the factories and the garment factories established with direct foreign investment and those women with jobs were able to provide adequate income to their families.
However, the economic sanctions imposed in 1997 and tightened further in 2003 led to the unavoidable closure of so many factories including the most garment factories producing for exports. And tens of thousands of workers, many were women, lost their jobs and it had adversely affected more than 200,000 dependant members of their families.  The damage is not just financial but also social and developmental.
The worst were the jobless women who were forced, by the necessity, to work in indecent profession such as prostitution just to feed their families. And many fell victim to human traffickers and ended up abroad working for cruel employers and getting unfair treatments. Some were even being forced into marriages abroad.
There are so many cases of our trafficked women being rescued by the Myanmar Women Welfare Organization and our people with patriotic mindsets are affected understandably. And the public outrage can turn against those foreign countries imposing sanctions against Burma as the result.
Our women have suffered much because of these unjust one-sided sanctions and trade embargos, she said. Therefore, she protested against the economic embargos and also the disinformation campaigns (by the exiles industry and foreign media organizations) causing the foreign governments to impose the sanctions.
On behalf of all Burmese women she supported U Htay Oo’s motion protesting against the unjust Sanctions, she concluded.