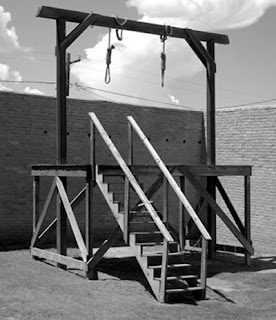 Aung Mya and Than Myint were already on the gallows and forced to stand inside the two white circles on the trapdoors. Aung Mya on the right and Than Myint on the left. With huge white hoods on and in the white jail garb they looked like two white cocoons standing up. Their hands were already cuffed from behind since in their cells and the men were now tying their legs tight with ropes.
Once everything was ready one junior warden shouted an order and the troops of warden stood to attention. Nooses were already around the necks of Aung Mya and Than Myint and already tightened. So I asked them to say their last wish.
First appeared Aung Mya’s voice. Not loud and not clear just blurred.
“For every future life ….  not a bad friend like in this life ……….”
Even before Aung Mya finished his sentence Than Myint’s voice came out loud and clear.
“Shit, Aung Mya, you Bastard …….”
I pulled out a white handkerchief from my trousers’ side pocket as the prearranged signal and the man at the lever pulled the handle while grinding his teeth. Jaing, with the loud noise from the trapdoors hitting the concrete sidewalls of the gallows base the two white cocoons dropped and disappeared out of sight. Both ropes taut without oscillating and twisting.
Than Myint was still dominating and bullying Aung Mya till the last seconds just before their unnatural deaths.