(This is a concise translation of Col Thet Oo (a) Thaung Wai Oo’s Autobiography.)
From a Civilian Life to a Soldier Life 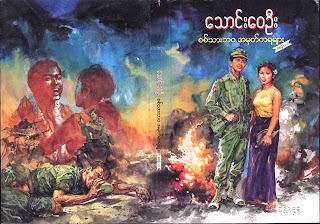 It was during third week of April 1966 when I reported at the Army Recruitment Centre on Prome Road at Myenigone in Rangoon for the OTS (Officer training School). That day at about 3 in the afternoon twenty officer cadets including me, on an army Ford truck, left the Recruitment Battalion for the OTS in Hmawbee near Rangoon.
The training had already started and we were the late group of cadets for OTS Intake 36. When we reached OTS the time was almost 5 in the evening. The cadets in their crew-cuts, green singlets, and khaki shorts were falling in for the evening PT and they all loudly cheered at us coming into the compound.

The harsh drills had made their sun-burnt faces really dark and they all looked the same and I could not recognize any of my friends who were there already. The barracks, the cadets and instructors, and the flowering Padauk trees everywhere. I looked at the huge OTS campus blanketed by Paduak fragrances and immediately realized I was at the gate of a whole new world.