Ahmed Ended “If You See Something, Say Something”

(Robert Spencer’s article direct from the FRONTPAGE on 01 October 2015.) 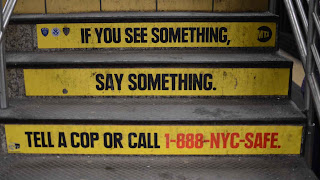 Ahmed Mohamed, the 14-year-old who was arrested for taking a clock that looked like a bomb to MacArthur High School in Irving, Texas, has attained mega-celebrity status at breakneck speed: he has been showered with gifts by Microsoft, courted by Mark Zuckerberg and MIT, invited to the White House, and much more. He received a VIP reception at the United Nations, where he met an admiring Turkish Prime Minister Ahmet Davutoglu.

What could be next? Maybe Pope Francis, ever anxious to appease Muslims, will make him the first living person to be canonized a saint; in the meantime, Ahmed will have to be content with the proclamation of Ahmed Day in New York City – a day with implications far more ominous than Ahmed’s ever-smiling countenance betrays.

Why is Ahmed Mohamed the world’s hero of the moment? People are wrongfully arrested all the time, and numerous children have fallen victim to schools’ zero-tolerance policy for weaponry, with suspensions for guns drawn on paper, pop-tarts chewed into the shape of a gun, and the like.


But Ahmed Mohamed, according to the mainstream media narrative (endlessly dinned into our ears by those who are apparently aware of how implausible it is, and who think frequent repetition will put their lie over), was not arrested because of overzealous application of the zero-tolerance policy, but because he was a Muslim.

School officials, you see, were so indefatigably “Islamophobic” that they singled out Ahmed for this harsh treatment, when if he had been a blond Methodist, they would have looked at his replica briefcase bomb and patted him on the back for his ingenuity.

And so Ahmed Mohamed is a living monument of “Islamophobia,” a sign of how racist rednecks victimize innocent Muslims in the U.S. on a routine basis, and to the enlightened Left, that makes him a hero of heroes.

On Ahmed Day in New York City last Monday, Public Advocate Letitia James lauded him as a role model. Comptroller Scott Stringer likewise gave him a framed commendation and tweeted, “Ahmed Mohamed is a role model for all NYers.” Hard-Left Mayor Bill de Blasio told him, “Keep doing what you’re doing,” and tweeted: “A young man builds a clock and starts a movement.”

In what sense is Ahmed Mohamed a role model? What kind of movement has he started? To answer those questions, it is useful to recall two men who never got a Day proclaimed in their honor in New York City: Lance Orton and Duane Jackson. In May 2010, they were both working as vendors in Times Square when they spotted an unoccupied, illegally parked Nissan Pathfinder smoking, reeking of gunpowder and emitting sparks.

It was a car bomb, parked there by an Islamic jihadist named Faisal Shahzad, who explained in a video that “jihad, holy fighting in Allah’s course, with full force of numbers and weaponry, is given the utmost importance in Islam….By jihad, Islam is established….By abandoning jihad, may Allah protect us from that, Islam is destroyed, and Muslims go into inferior position, their honor is lost, their lands are stolen, their rule and authority vanish. Jihad is an obligation and duty in Islam on every Muslim.”

Orton and Jackson prevented Shahzad from fulfilling his obligation and duty to wage jihad by quick action: they alerted police, and Shahzad’s car bomb was defused before it could explode. Orton explained his actions by noting that he was a veteran and repeating the familiar counter-terror adage: “See something, say something.”

But what would have happened if Faisal Shahzad’s Nissan Pathfinder had not been rigged to explode at all, but was just, say, an innocent fireworks display? What if Faisal Shahzad had been arrested for this fireworks display after Orton and Jackson alerted police, only to charge everyone involved with “Islamophobia”? If Faisal Shahzad’s car had turned out to be innocent, in today’s political climate Orton and Jackson would be the objects of intense mainstream media vilification as “Islamophobes,” and Shahzad would be shaking hands with Barack Obama.

Ahmed Mohamed is a role model and the originator of a movement, all right. He is the killer of the “see something, say something” ethos – at least when it comes to Muslims. While non-Muslim students may still run afoul of the zero-tolerance for weapons policy in schools for pop-tart guns and pointing their fingers and saying “Bang,” school administrators will now think twice about subjecting Muslims to such suspicion, no matter how suspiciously they’re behaving.

The upshot of this ridiculous adulation of Ahmed Mohamed will be that Muslim students will now be exempted from scrutiny for bringing suspicious objects to school: to subject them to such scrutiny would be “Islamophobic.” Will some enterprising young jihadi take advantage of this favorable new situation, and make a clock that really is a bomb?


If that ever happens, will Mayor de Blasio apologize for Ahmed Day? Will Barack Obama apologize for feting the lad at the White House? Of course not. For the Left, accountability is “McCarthyism.” And so St. Ahmed will continue to go from love fest to adulatory love fest, with the only people happier about it all than his Leftist adulators being Islamic jihadists. 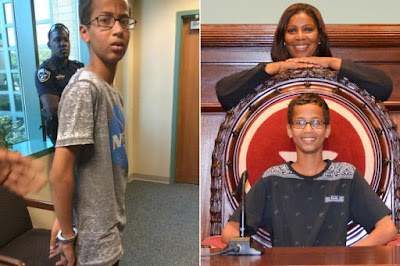