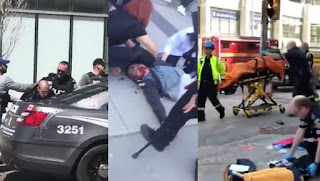 A VAN jumped a kerb in a busy intersection in Toronto overnight and struck more than 20 people. Toronto’s Police Chief confirmed that 10 people were killed and 15 were injured in the incident. Eyewitnesses described the horrific scene as the white van jumped the footpath and travelled for more than a kilometre, mowing down pedestrians at speeds of 70km/hr.

An eyewitness told local media: “He was just hitting people one by one, he hit every single person on the sidewalk, holy God I never seen anything like this in my life ... you see it in a war zone. He is going 60 to 70 kms on the sidewalk ... this person was intentional, doing this he was killing everybody ... this is terrorism stuff here.”

The van was finally stopped after a police car approached from the opposite direction, swung into a U-turn and began driving side-by-side with the van. After both vehicles came to a stop, a police officer exited his car with gun drawn.


The suspect then flung open the van door and began pointing a black object at the officer, reportedly shouting “shoot me”. Police later said the man was unarmed. The tense stand-off ended when the driver dropped the object he was holding and lay down.

Bodies covered with blankets could be seen along the footpath after the terrifying incident, which occurred as the city was hosting the G7 Summit. Police Chief Mark Saunders said 25-year-old Alex Minassian (a Muslim?) from Richmond Hill, Ontario, is being questioned in custody.

It was not immediately clear what caused the driver to strike the pedestrians in a busy intersection in the north-central part of the city shortly after 1.30pm local time, but Saunders said the driver’s actions “definitely looks deliberate”.

Canada’s minister of public safety Ralph Goodale told reporters that police are still investigating to determine what happened and why. Goodale said Canada had not changed its terrorism alert level and he has no information that would suggest a need to do so.

CBC reports government officials as saying the suspect appears not to be associated with any organised terrorist group. CBC says the suspect is not considered to represent a larger threat to Canadian national security. 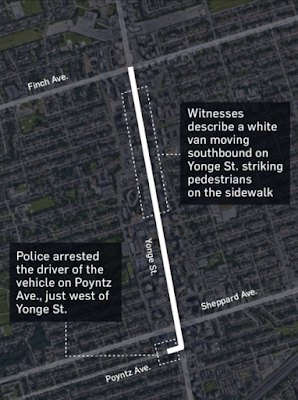 ‘POLICE TOOK GUN FROM HIM’

Video shown on several Canadian outlets showed police arresting the driver, dressed in dark clothes, after officers surrounded him several blocks from where the incident occurred in north Toronto. “Get down!” the officer is heard shouting. “I have a gun in my pocket,” the suspect replies. “Get down or you’ll be shot!” the officer says.

Witness Carlos Rojaas said he was sitting and talking on his mobile phone near the intersection of Yonge Street and Poyntz Avenue when the van came speeding towards him. “The guy is driving fast, right? Then he pull aside, then I see the police car after him,” Mr Rojaas told CTV News.

Rojaas said he thought it was a traffic stop — until he saw that both the driver and police officer pursuing him were armed. “The police has his gun in his hand … then I see the other guy inside the van with gun too,” he said. “So they both holding gun, pointing to each other, like ‘Drop it, drop it!’” That’s when Rojaas fled. 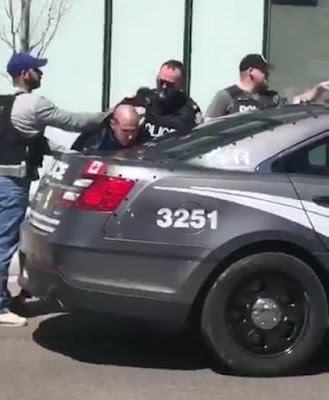 ‘GETTING HIT ONE BY ONE’

Ali Shaker told local radio station CP24 that he had been driving south along Yonge Street when he saw a white van ahead of him mount the footpath, just south of Finch Avenue. At first, he thought the driver had gone into cardiac arrest.

“He’s just hitting people, one by one going down — oh man, it was a nightmare,” Mr Shaker said. “I thought he had a heart attack or something, so I was trying to chase it down.” The van, he said, appeared to be going as fast as 70 kilometres per hour as it continued to mow down pedestrians. 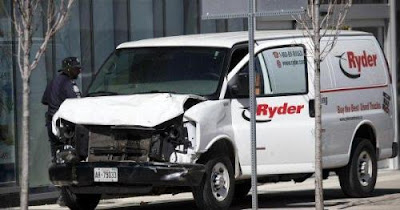 ‘SOMEBODY WAS GETTING DRAGGED’

Kenneth Wu told CityNews he watched in shock as the van ran down an older woman. Wu said the driver looked him directly in the eye. “He looked at me face to face, that’s when I saw that he was a very angry and scared young guy,” Wu said. “I don’t know what his motives are.”

Graham Vartiamaki was travelling north on Yonge Street when the van hit several cars ahead of them near Mel Lastman Square before “purposely (getting) on the sidewalk.” “I jumped out and started chasing him and he just kept driving down the sidewalk hitting people,” Mr Vartiamaki, still shaking, told CTV News.

“(It was) absolutely horrific, just watching people get thrown from in front of the van,” he said. “At one point, somebody was getting dragged as well.”

Witness Phil Zullo told Canadian press that he saw police arresting a man who had been driving a Ryder rental truck and saw people “strewn all over the road” where the incident occurred.

“We could see bodies on the ground, people trying to revive them, give them CPR,” he said. “The crowd was trying to bring them back to life, their bodies were full of blood. Their body parts were twisted ... I saw dead (people) put into body bags.”

Mr Zullo told the Toronto Sun he was driving north on Yonge Street when he said he observed police chasing a vehicle. “I must have seen about five, six people being resuscitated by bystanders and by ambulance drivers,” Mr Zullo said. “It was awful. Brutal. Just people everywhere. People — shoes and shirts and ball caps on the floor.” Another eye witness told CNN they saw a stroller fly through the air.

Police shut down the Yonge Street and Finch Avenue intersection following the incident and Toronto’s transit agency said it has suspended service on the subway line running through the area. The incident occurred as Cabinet ministers from the G7 countries were gathered in Toronto to discuss a range of international issues in the run-up to the G7 meeting near Quebec City in June.

Canadian Prime Minister Justin Trudeau spoke to media as he left a G7 meeting. Mr Trudeau said: “Our hearts go out to anyone affected. We’re obviously going to have more to learn and more to say in the coming hours,” he said.

Toronto Mayor John Tory said: “My thoughts are with those affected by this incident and the frontline responders who are working to help those injured.” State Premier Kathleen Wynne said: “This is a frightening thing that - as Mayor Tory said - does not, is not emblematic of who we are as a city or as a province but it is a tragedy... that we will work through but there will be a lot of sadness and pain before that happens.” 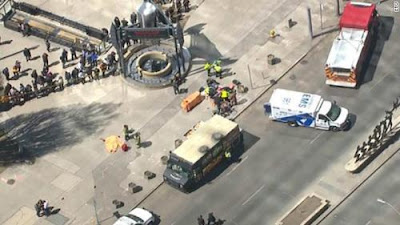 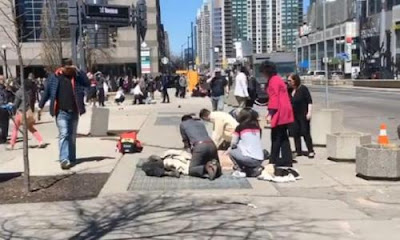 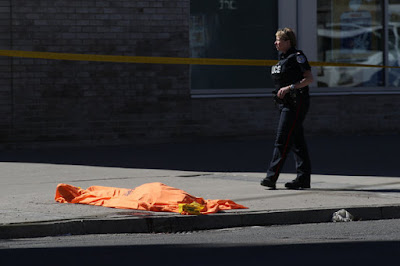 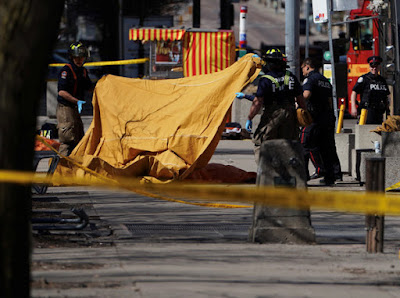 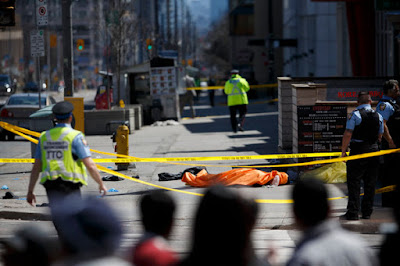