(Frances Martel’s article from The BRIEBART NEWS on 13 April 2018.) 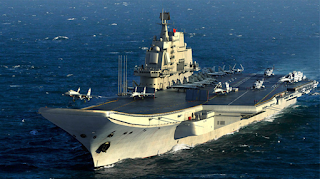 China has announced live-fire military exercises in the Taiwan Strait amid heightened tensions over increased American support for Taiwan. The announcement by authorities in the coastal province of Fujian on Thursday was accompanied by a statement that the navy was ending a three-day exercise in the South China one day early.

Chinese Communist Party leader travelled to the South China Sea on Thursday to preside over what state media are calling “the country’s largest ever maritime military parade,” a series of exercises meant to intimidate rival powers in a region where Beijing has illegally colonized foreign territory.

The Chinese state newspaper Global Times reports that Xi was on hand to inspire the People’s Liberation Army (PLA) with an address on why naval power is more important than ever, as well as to inspect the country’s new naval assets. The parade featured a display of China’s Liaoning, the nation’s only aircraft carrier, which made its debut at a military display.


In this April 12, 2018 photo released by Xinhua News Agency, the Liaoning aircraft carrier is accompanied by navy frigates and submarines conducting an exercise in the South China Sea. Along with the Liaoning, China paraded “forty-eight warships, 76 aircraft and more than 10,000 sailors and soldiers,” the Times noted. 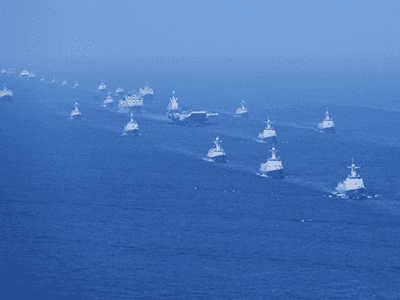 Experts commenting to the Global Times emphasized that the display was not for show and that China was preparing for war. “China’s upgraded navy signifies the PLA is not afraid of war and is capable of winning any battle,” military expert Song Zhongping said. “The Thursday parade could also serve as a deterrence to maritime hegemony, making adversaries think twice before attempting to harm China’s core national interests.”

Another naval expert identified as Li Jie told the newspaper that “holding the parade in the South China Sea was a strategic move as the waters are a potential combat zone,” noting that the United States has routinely conducted Freedom of Navigation Operations (FONOPs) in the region. This week, the nuclear-powered USS Theodore Roosevelt traveled through the area.

The event also served as an opportunity for the nation’s soldiers to venerate Xi in person. “It is my utmost honor to be inspected by Chairman Xi,” Ma Xiaohui, a navy soldier, told the state outlet Xinhua. “I will maintain momentum, train hard, and always be Chairman Xi’s good soldier.” The soldiers reportedly all greeted Xi with the salute, “Hail to you, chairman.”

Xi addressed the soldiers with a speech urging them to “fully implement the Party’s absolute leadership over the armed forces, be firm in ideals and convictions, and uphold the glorious traditions, while pushing for technological innovation, developing new types of battle forces, and building a modern maritime combat system,” according to Xinhua. Xi declared that China’s army has “stood up in the East” as the dominant force in the region.

Following his appearance at the military display, Xi went on to the southern island of Hainan, in the South China Sea near Vietnam and its Paracel Islands, which China illegally claims as its own. 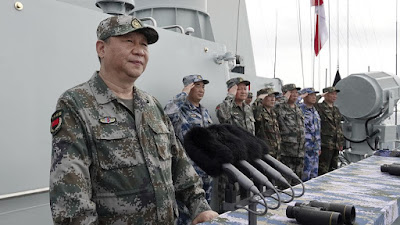 At an event on the island – previously an agricultural backwater that the Communist Party is attempting to turn into a tropical tourist destination – Xi declared he would turn Hainan into “a vivid example of socialism with Chinese characteristics for a new era,” the official name of the philosophy more commonly known as “Xi Jinping Thought.”

As an undisputed Chinese South China Sea island, Hainan is on the front lines of both the One Belt, One Road (OBOR) initiative to dominate global trade and of China’s plan to take over the entirety of the South China Sea, including territories that international legal tribunals have declared are not Chinese.

China claims territory belonging to Vietnam, the Philippines, Brunei, Taiwan, Malaysia, and waters near Indonesia’s exclusive economic zone. In 2016, the Permanent Court of Arbitration at the Hague ruled against China’s claims in the region and declared its military development in the region illegal.

China vowed to disregard the ruling and continue building on foreign territory. By the end of 2017, Xi Jinping declared China the “keeper of international order,” implying that international legal norms China disagreed with were illegitimate.

China has built several artificial islands on atolls in the Spratly and Paracel Islands and equipped them with military weaponry and surveillance technology. This week, reports surfaced that China had installed military jamming equipment on its islands, potentially disrupting communication between non-Chinese vessels in the region and their countries. 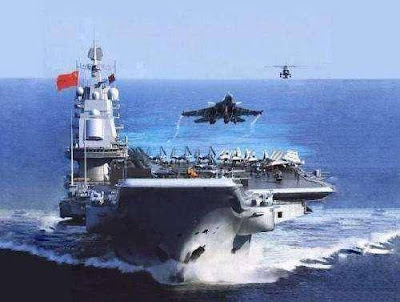 After the dissolution of the Soviet Union in 1991, the ownership rights were transferred to Ukraine. The construction had ceased by 1992 due to funding problems. The unfinished vessel sat in the Ukrainian shipyard until 1998, when it was sold at auction to a Macau-based Chinese company for $20m. The company earlier planned to convert the ship into a floating casino, but handed over the vessel to the PLA Navy for refurbishment.

Liaoning was moved to a dry dock at Dalian in early June 2005. The hull was sandblasted and scaffolding raised around her. Her island was coated with a red marine primer to treat the corrosion of the metal.

In April 2009, Liaoning (Varyag) was shifted to another dry dock to install engines and other heavy equipment. The superstructure was outfitted with a new radar mast by the end of 2009. The PLA Navy built a full scale logistics and training deck and island mockup of the carrier at the Wuhan Naval Research facilities.

The system installation commenced in late 2010. The island of the aircraft carrier was almost complete by March 2011. In July 2011, the Chinese Defence Ministry proclaimed that the aircraft carrier is refitted for scientific research, experimental and training purposes.

The flight deck is designed to carry about 50 warplanes, including helicopters and fixed wing aircraft. Liaoning (Varyag) was originally equipped with a ski-jump flight deck for launching aircraft. The aircraft carrier is expected to be fitted with an electromagnetic aircraft launch system (EMALS). The system allows the launch of heavier naval aircraft from the deck.

Liaoning (Varyag) is expected to operate J-15 aircraft, J-10 carrier based aircraft, Z-8/Ka-31 AEW helicopters and Ka-27 ASW helicopters. The ship can carry 2,500t of aviation fuel for allowing the aircraft and helicopter sorties of 500 to 1,000.

The FL-3000N uses the passive RF/ImIR guidance system. It can engage subsonic and supersonic targets within the range of nine kilometres and six kilometres respectively. The Type 1030 CIWS fires 9,000 rounds / min.

Liaoning (Varyag) is equipped with 3D air / surface search radar over the main mask, and four multifunctional APAR (active phased array radar) panels. The countermeasures against hostile threats are provided by the decoy / chaff (24-tube) launchers fitted on the ship. 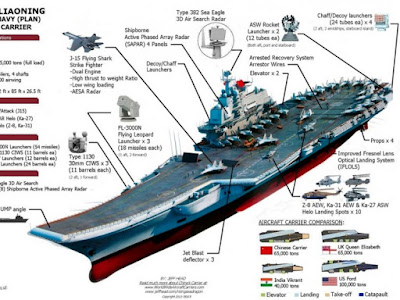