“I was planning to go to the American embassy to meet with a group of demonstrators who are planning to welcome Trump into the country… it’s really good to see him in this country, and speaking truth to the people in power in this country,” explained David Kurten, an elected member of the London Assembly for the Brexit-supporting UK Independence Party.

“But as I came out of the police station I was handed this piece of paper by a couple of friendly police officers — who were just doing their job — but they’ve imposed Section 12 Public Order Act conditions on the assembly outside the American embassy, which means that people are not allowed to proceed or have a march or any kind of demonstration,” he claimed.

“And we’ve also been told that if I go to the American embassy in a group of three or more people that I’m liable to be arrested myself — so free speech is dead,” he concluded. “What this is, is Sadiq Khan not wanting people to express pro-Trump values,” added Young Independence Deputy Chairman Reece Coombes.

“But as soon as probably, essentially only a few thousand of us want to protest in favour of Trump and show our support for the leader of the free world, we are banned, we are silenced, and we are censored.”

Mayor Khan actively encouraged the anti-Trump protests, and was active in the media defending his decision to authorise an “obscene” balloon caricaturing the U.S. President on ground of freedom of speech and the right to protest.

The restrictions on the ‘Welcome Trump’ event are only the latest example of what critics have described as double standards in this area, with the Muslim Mayor having previously provided almost £2 million in funding for an “online hate crime hub” for police to tackle mean comments on the Internet, and banned fitness supplement adverts featuring attractive women from the London Underground. 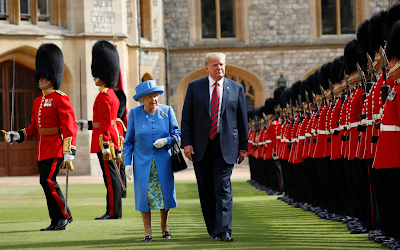 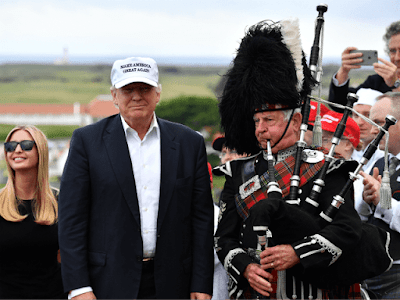 One march started at 11 a.m. London time with another at 2 p.m. But if pictures from the first march are any indication, estimates of 200,000 angry protesters clogging the city streets might be heavily exaggerated.

While it's still early in London and people aren't yet off work, the crowds are dismal. They'll no doubt grow and rabble rousers will set fires and destroy property as they always do, but it's a lame start to the protests.

President Trump is mostly staying away from London. Saying he has been told that a 20-foot “Trump Baby” blimp will be flown above Parliament Square today, he said: “I guess when they put out blimps to make me feel unwelcome, no reason for me to go to London."

The mainstream media also played up a planned protest in Brussels on Wednesday dubbed “Make Peace Great Again." Over and over, organizers said thousands of protesters were set to gather outside the NATO summit to protest Trump.

But only a couple of dozen people actually showed up. "Euro News’ Damon Embling reported that organizers were expecting a few thousand people to attend the protest, but just a few dozen turned out," NTK Network reported. 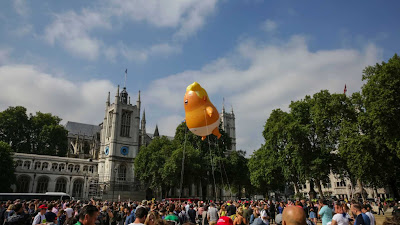