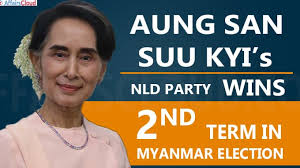 The main opposition party, the military-backed Union Solidarity and Development Party (USDP), had won 24 seats, according to the partial official results. The USDP raised objections on Wednesday and demanded a new vote as soon as possible "in order to have an election that is free, fair, unbiased and free from unfair campaigning".

The election commission on Wednesday said any allegations of irregularities were from a minority of participants. The comfortable win will be a welcome boost for Ms Suu Kyi, a Nobel Peace Prize laureate who has had a turbulent first term and struggled to meet high public expectations.

Nick Ross from the Myanmar Research Centre at the Australian National University told the ABC the election result would bring relief to Ms Suu Kyi and her supporters. "A great deal of hope was invested in Aung San Suu Kyi," Mr Ross said. "Among the voter base of the NLD [party] she is revered, she has a kind of unparalleled stature."

She is tasked with developing a country that suffered nearly 50 years of isolation and decay under strict military rule, for many years of which she was held under house arrest. Supporters wearing shirts with logos of the Myanmar Leader Aung San Suu Kyi's National League for Democracy (NLD). Even now, her Government is required to govern with military involvement, in particular in the areas of security and defence, under a constitution drafted during the generals' rule.

The NLD won by a similar margin in the last election in 2015, the first free vote since the end of military rule. This time, the ballot was seen as a referendum on Ms Suu Kyi's Government, which is hugely popular at home.

"There have been some improvements to health and infrastructure and people do notice things like that," he said. "After a very long period under the military and military-backed governments where things really didn't improve at all and in many areas worsened, that is no small thing to people." Despite Aung San Suu Kyi having widespread support, it's really the military that calls the shots.

Mr Ross added that Myanmar remains plagued with other problems though. "The first challenge [for the NLD], and it seems like it is going to be a big one, is the COVID-19 pandemic and the economic fallout from the pandemic," he said.

"Myanmar has been slammed with a very deep recession which has hit export-exposed sectors like agriculture, manufacturing and tourism very hard, and created a great deal of misery and unemployment. It will require deep intervention by the government, which is not something that has a long precedent in Myanmar." 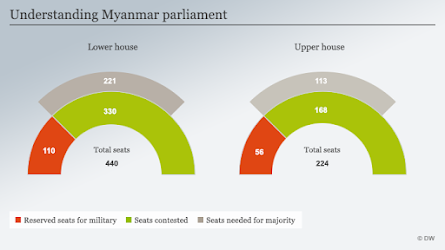 Armed conflicts in the north of the country continue to be a huge challenge also. "The conflict with the Arakan army has grown from something essentially negligible at the start of the NLD's first term to the biggest and most active armed conflict in the country, which has succeeded in pushing the government out of parts of Rakhine State," Mr Ross said.

Ms Suu Kyi has faced condemnation from many in the international community, who accuse her of turning a blind eye to violent atrocities against the minority Rohingya population. Shayna Bauchner from Human Rights Watch told the ABC Ms Suu Kyi's stance on the issue has increased her popularity, because people inside the majority Buddhist country do not recognise Rohingya Muslims as an ethnic group.

"The reality is, if the public attitude towards the Rohingya is going to change, it needs to be endorsed and promoted from the top," Ms Bauchner said. The plight of Myanmar's Rohingya refugees, a Muslim ethnic minority group rendered stateless in their homeland and detained in transit nations, is desperately bleak.

"That means Suu Kyi using her popularity and her platform to reject hate speech and put forward a new narrative about Myanmar as a multi-ethnic and multi-religious country that really benefits from diversity." Ms Bauchner added that "international pressure" would be needed to prompt change on the Rohingya issue from this next administration.

"The new government that forms shouldn't be viewed as a new page in the country's democratic transition, but as a continuation of the leadership that has been committing abuses that we have seen over the past number of years," she said.

More than 730,000 Rohingya, members of a persecuted Muslim minority, fled the country following a 2017 military crackdown that the United Nations has said was executed with genocidal intent. Myanmar said it was carrying out legitimate operations against militants who attacked police posts. Ms Suu Kyi's defenders believe critics are unrealistic to expect rapid change in the country after half a century of military rule and are hampering efforts to secure gradual progress.