(AFP News article from the FRONTIER MYANMAR on 29 January 2021.)

UN, foreign missions sound alarm over Myanmar coup fears: UN Secretary General Antonio Guterres raised “great concern” over the recent developments, his spokesperson said. More than a dozen embassies, including the US and EU delegation, Friday urged Myanmar to “adhere to democratic norms”, joining the UN in a chorus of international concern about a possible coup.

Myanmar is just a decade out of nearly 50 years of military rule, with a nascent democracy governed under a junta-authored constitution which dictates power-sharing between the civilian administration and the country’s generals.

For weeks, the powerful military has alleged widespread voter irregularities in November’s election, which Aung San Suu Kyi’s ruling National League for Democracy won in a landslide.  Their call for voter list verification ramped up this week, with an army spokesman on Tuesday refusing to rule out the possibility of a military takeover to deal with what he called a political crisis.

Fears grew after army chief General Min Aung Hlaing – arguably Myanmar’s most powerful individual – appeared to echo the sentiment Wednesday when he said the country’s constitution could be “revoked” under certain circumstances.

The newly elected MPs are expected to begin sitting in parliament on February 1, and security in the capital Nay Pyi Taw was tight on Friday with police guarding roads with fences and barbed wire.

The US embassy – along with 16 countries including former colonial power Britain and the EU delegation – released a statement Friday urging for the military to “adhere to democratic norms”. “We look forward to the peaceful convening of the Parliament on February 1 and the election of the president and speakers,” it said. “(We) oppose any attempt to alter the outcome of the elections or impede Myanmar’s democratic transition.”

United Nations Secretary General Antonio Guterres also raised “great concern” over Myanmar’s recent developments, said his spokesman Stephane Dujarric. “He urges all actors to desist from any form of incitement or provocation, demonstrate leadership, and to adhere to democratic norms and respecting the outcome of the (election),” Dujarric said in a statement.

The polls in November were only the second democratic elections Myanmar has seen since stepping out from the curtain of a 49-year military dictatorship. As expected, Aung San Suu Kyi – an immensely popular figure in Myanmar – and her party swept the polls, renewing a lease for their administration for another five years.

But the army alleges there were 10 million cases of voter fraud nationwide – a claim they want investigated – and have demanded the release of voter lists from the election commission for verification. The commission released a statement Thursday defending itself, saying that the polls were free, fair and credible, and had “(reflected) the will of the people”.

While the commission also denied allegations of voter fraud, it acknowledged “flaws” in the voter lists in previous elections, and said it was currently investigating a total of 287 complaints. 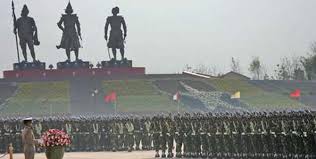