What has traditionally been a ceremonial rite honoring the results of the presidential election already had been transformed into a partisan battle. Dozens of Republican lawmakers had vowed to object to accepting the electors certified by the states.

Now that verbal clash sparked a violent one. The scenes of a mob taking over the Capitol was reminiscent of the forceful governmental overthrow more familiar in authoritarian regimes, not in the world's oldest democracy. Law enforcement officials used flash grenades and tear gas to clear the rioters from the outdoor balcony where Biden is slated to be inaugurated in two weeks.

Former President George W. Bush issued a statement calling it an "insurrection." Former Defense Secretary Leon Panetta, his face grave, said on MSNBC that "it's a moment where you know that indeed our democracy is fragile."

The shock among officials and former officials, journalists and academics, and President-elect Joe Biden was palpable. The reaction from Trump himself was more muted. Only hours after the rioting began – and after Biden had delivered a public plea to the president to help put an "end to this siege" – did Trump post a short video calling for calm.

"I know your pain; I know your hurt," Trump said, addressing the rioters. "But you have to go home now. We have to have peace. We have to have law and order." That said, he also repeated his baseless charges that the election had been "stolen" from him, the very issue that had sparked the mob's actions.

Later, he seemed to justify their actions in a tweet, calling the rioters "great patriots." Twitter removed both posts shortly after it flagged them with warning labels. "These are the things and events that happen when a sacred landslide election victory is so unceremoniously & viciously stripped away from great patriots who have been badly & unfairly treated for so long," he said as darkness fell. "Go home with love & in peace. Remember this day forever!"

Trump supporters try to break through a police barrier, Jan. 6, 2021, at the Capitol in Washington. As Congress prepares to affirm President-elect Joe Biden's victory, thousands of people have gathered to show their support for President Donald Trump and his claims of election fraud.

There were calls to impeach Trump, despite the short time he has left in office. He "must be removed from office and prevented from further endangering our country and our people," said Rep. Katherine Clark, D-Mass, a member of the House Democratic leadership. In a step heavy with symbolism, Pelosi announced that the Electoral College count would resume Wednesday night once the Capitol had been cleared.

Since Election Day, Trump has refused to accept the outcome. For two months, he and his allies have filed dozens of lawsuits in battleground states; none of them have gotten legal traction, not even from judges he appointed. He has lobbied governors and state legislators to change the count in their state or hold new elections. In a phone call Saturday that stretched for an hour, he cajoled and threatened the Georgia secretary of state to "find" the 11,000 additional votes Trump needed to win that state.

Through it all, he has repeatedly told supporters that a massive scheme waged by Democrats, the news media, Big Tech companies and others had robbed him of a victory he had won.  In an interview on Tuesday, Alvin Tillery Jr., director of Northwestern's Center for the Study of Diversity and Democracy, had compared Trump's actions to sedition. "This looks like a real coup d'etat we see in developing nations or in our Latin American neighbors," he said then. "People behave this way when they don't think they can win on the rules."

Trump's attacks on the legitimacy of the election erodes faith in democracy itself, said David Barker, director of the Center for Congressional and Presidential Studies at American University. "Support for the system is the thing that keeps a democracy going," he said. "If you lose it, you have to start wondering if there's a danger of the U.S. going the way most other democracies have gone in the history of the world." 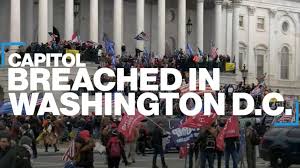 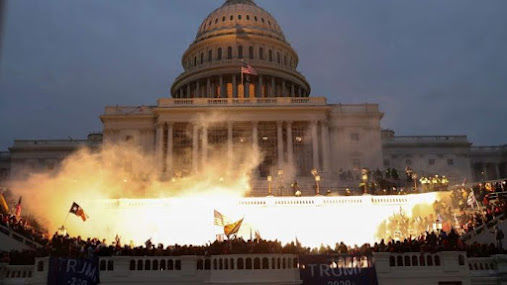 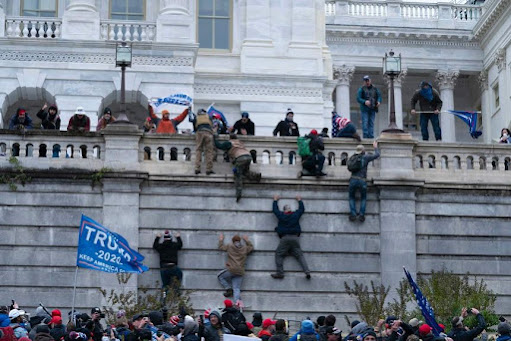 Washington DC is in the grips of utter chaos after a large number of Donald Trump supporters descended on Capitol Hill to stage a fiery demonstration.

Media described law enforcement at the scene as having been “overwhelmed” as rioters stormed the building. CNN reported that police at the Capitol building were caught off guard and didn’t expect people to breach a series of fences leading up to the building. But questions are being raised on social media about how seriously some police officers took the incident, given vision that has emerged.

A clip posted on TikTok from the scene shows police removing barriers to allow the rioters to continue towards the Capitol steps. In addition, footage streamed live from inside appears to show police posing for selfies with members of the group.

A US Capitol building police officer poses for a selfie with one of the insurrectionists who helped storm the US Capitol building. National Guard troops have been deployed in a bid to restore order and Washington DC will be subjected to a 12-hour curfew tonight.

The FBI deployed SWAT-style officers to sweep the building in an attempt to remove pro-Trump rioters, who took control of the Senate floor as well as various offices of high-profile members. But the slow response of authorities is already being criticised by politicians and commentators.

MSNBC national correspondent Joy-Ann Reid was savage in her analysis of the attack on the Capitol, saying it showed white Americans think they “own the place” and why they “aren’t afraid of the cops”.

“They know that they are not in jeopardy, because the cops are taking selfies with them, walking them down the steps to make sure they’re not hurt, taking care with their bodies, not like how they treated Freddie Gray’s body... white people are never afraid of the cops, even when they’re committing insurrection.”

She added if it were a Black Lives Matter protest “there would already be people shackled, arrested en masse, or dead. They know the cops are cool with it,” Ms Reid added. One woman, an as-yet-unidentified civillian, has been confirmed dead after being shot in the Capitol building.

It’s the not the first time police have been criticised for their actions at right-wing protests over recent years. In Austin, police were forced to reiterate their stance on uniformed officers appearing in photos after a number appeared in a shot with a member of the Proud Boys group flashing a white supremacist symbol.

The Austin Police Department’s guidelines say officers aren’t allowed to be uniformed in photos that endorse or supports any political campaign or initiative or any social issue or cause. It defended its department officer’s continuing to take photos with people when requested, saying “they do it to help foster relationships within our community”.

“If these officers were aware of the behaviour of those on the fringe of the group, there is no doubt in my mind that they would not have participated in the picture,” an APD statement read. 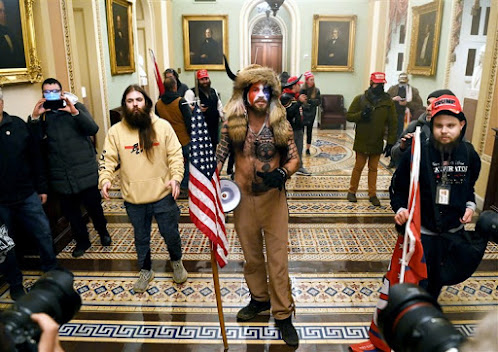