The massive and brutal offensive against the high Kharyarbon peak by Burma Army began on midday January 24 as day-long shelling by the army’s 105 mm howitzer artillery guns positioned at the nearby Point-771 hilltop of Lajaryan Range which has fallen into Burmese hands just few weeks ago after a month-long fighting.
The Kharyarbon Peak is the highest position on the Kharyarbon Range overlooking the KIA’s last stronghold and headquarters Laiza on the Chinese border. Once Kharyarbon is captured KIA is basically trapped at Laiza and their only way out is into China.
Despite their real status as a guerrilla army KIA has firmly positioned itself on the well-established border town of Laiza and prospered during last ceasefire (almost 18 years long) with Burmese. But now they are paying for their strategic mistake after unilaterally scrapping that ceasefire and resuming the brutal civil war started more than 50 years ago in 1961. 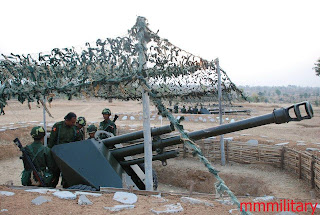 According to a senior KIA officer Burmese army started the ground-shaking artillery barrage at about 1:30 on January 24 and unleashed the overwhelming ground attack at about 4 in the late afternoon. By then army’s 105 mm howitzers has stopped shelling on Kharyarbon but continued shelling on the KIA HQ at Laiza.
Apparently Burmese has planned to take Kharyarbon within a day and they are using ground forces 40 times more numerous than KIA’s defending troops, he added.
“Since 13:30 today our Kharyabon range is under a continuous artillery barrage that almost blew our eardrums off. We noticed the shells are landing at the rate of four a minute. The shelling stopped only at 16:00. We don’t suffer that much physically except our ears. Once the artillery’d stopped their ground troops charged at our positions.”
Only relief for KIA compared to other assaults such as Lajaryan attack was lack of air support on the Burmese side. Burmese seems to be now reluctant to use their jet fighters and helicopter gunships on KIA positions. International condemnations especially from the US embassy in Rangoon have apparently brought the reluctant-restraints on Burmese side.
Massive Casualties on Burmese Side
The uphill bayonet charges against the KIA defenders inside strongly-entrenched positions on the high ground apparently had caused massive casualties on Burmese side. According to a senior KIA officer, Pakhoku-based LID 101 the 5,000 strong main force on Burmese side was basically wasted on the first day of ground attack.
The light infantry battalions LIB-250, 251, 252, 253, 254, 255, 256, 257, 258, and 259 originally about 500 strong each battalion are now depleted to 130 most in each battalion. The whole battalion of LIB-258 was killed or wounded on the slopes of Kharyarbon.
Burmese newspapers last few days are filled with sad obituaries of young Burmese army officers. Lieutenants, captains, and even the majors are recently filling the columns of obituaries. And the extraordinary thing is many Burmese are honouring their fallen heroes of Burmese army.

The photos of young Major Soe Shwe Phyo the fallen Executive Officer (2IC) of a completely-wiped-out Burmese LIB now adorned so many face book pages set up by the patriotic young Burmese. Young major has left his young wife almost 8-month pregnant with their first son. The mourning poem written by one of his DSA-42  classmates also is widely circulated among Burmese blogs and face book pages.
Latest news from KIA side indicated that previously-reserve-division the LID-88 is now taking over the slopes occupied by the depleted LID-101. And they are expecting more barrages followed by many desperate bayonet charges from the determined Burmese.
Burmese Finally Overran Kharyarbon Hill
The artillery pounding was so brutally effective the whole KIA battalion defending the highest peak on the crucial Kharyarbon range had been wiped out from their entrenched fortifications and the peak has finally fallen into Burmese hands.
Ravaged by Burmese army’s continuous shelling the Kachin Independence Army (KIA) has been pushed from its Lagatbon post located on Kharyarbon mountain range on Jan 26 at around 1 pm. Kharyarbon is one of the highest peak in the mountain range surrounding KIO’s administrative capital Laiza.
Almost all the trees in the whole mountain range are destroyed by the shelling, said a front-line source. A Laiza resident says, “Since Burmese forces overrun Kharyarbon, there is a resounding silence in Laiza and its surrounding area for the very bfirst time in 2013.”
Kachin Capital security forces and combat troops stationed at Kharyarbon have been pounded with one of the heaviest artillery shells for weeks. On Jan 16 and 17, two Burmese army’s fighter jets fired with rockets on KIA positions on Kharyarbon.
A combined force of at least 10 infantry battalions and combat commandos began their ground attacks on KIA post once the artillery shelling stopped. The shelling continued again for long hours after ground troops advanced a few meters, said Kachin front-line source.
On Jan 24 alone, Burmese army’s artillery units stationed at nearby mountains fired more than 1,600 times. KIO’s spokesperson U La Nan said, “Thursday artillery shelling by Burmese army is a record high since the beginning of the war”.
Losing the Kharyarbon range is a major blow to KIA but Kachin officials are still confident that their headquarters are secure enough from Burmese army’s immediate threats. Local observers say fighting will likely continue in nearby areas as troops from both sides confusingly mingle in the area.
But the army advance means government troops are now just 3km away from KIA HQ at Laiza, with no more lines of defence in front of them KIA now being pressed up against the China borderline.
Barbarians (Burmese Soldiers) at the Gate (of Laiza)
Burmese army commando troops’ point units are now coming down the Kharyarbon range and digging in at the western bank of Moe Lae Creek just outside Laiza. The bridge in the photo below is Moe Lae Bridge.
After the bridge the right branch of the road goes to Laiza and the left branch goes to Lajaryan on the Bamaw-Myitkyinar Road. Probably Burmese army will stay on the west bank as Moe Lae Creek is becoming a demarcated line between Burmese army and the KIA trapped in Laiza hard-pressed against the Chinese borderline.
Related posts at following links:
KIA General Gam Shaung wounded by Army Gunship?
Lajaryan fell and Laiza surrounded by Burmese Army
Posted by Hla Oo at 11:52 PM