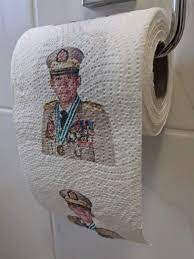 Myanmar’s Military Junta Tightens Control Over Foreign Currency Flows: Under new central bank rules, all local holders of foreign currency will have to convert them to Myanmar kyats.

Myanmar’s military administration is moving to tighten its control over movements of foreign currency, as the country’s economy reels from mounting nationwide conflict and the accumulated effect of Western sanctions. In a notification published in state media on Monday, the Central Bank of Myanmar (CBM) ordered banks and other holders of foreign currency to convert these deposits into the local kyat currency.

According to the notification, foreign exchange earned by locals in Myanmar must be deposited in accounts at licensed banks and exchanged for kyats within the unrealistic timeline of one working day. The central bank said that absent a special exemption, transfers of foreign currency abroad can only be carried out via licensed Foreign Exchange Trading banks. It added that “failure to comply with this notice will result in legal action under the Foreign Exchange Management Law.”

The move speaks to the disarray of Myanmar’s economy since the military coup of February 2021, which immediately prompted mass protests, civil disobedience work stoppages, violent crackdowns by the military junta, and disruption to critical services like telecommunications, banking, health, and education. To this concatenation of challenges has since been added repeated rounds of U.S., British, Canadian, and European Union sanctions designed to punish the junta for its takeover and ensuing violent crackdowns on pro-democracy protests. 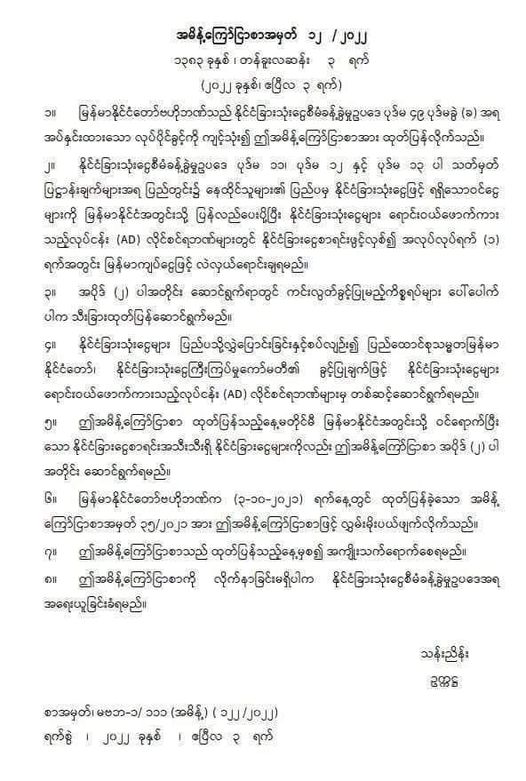 The CBM’s move come after a year in which it has sold $553.8 million worth of U.S. dollars in a bid to stem the slide in the value of the kyat. Western sanctions, particularly those from the U.S., along with the collapse in exports and foreign direct investment, have choked off the amount of U.S. dollars flowing into Myanmar, right at a moment of uncertainty in which many speculators and ordinary citizens have flown to the safety of the U.S. dollar. The result has been steady deflationary pressure on the kyat.

Last September, the black market value of the kyat fell to an all-time low of 2,200 to the U.S. dollar after the CBM abandoned a rule that kept the kyat-U.S. dollar exchange rate loosely pegged to the bank’s reference rate. By comparison, the black market rate was 1,330 on February 1, when the military overthrew Myanmar’s democratically elected government.

The CBM’s move is a clear attempt to establish its control over the remaining foreign exchange inside Myanmar, in order to prevent capital flight and give it the wherewithal to pay for vital imports. At the same time, the military administration has announced plans to begin accepting foreign currencies, such as Thai baht, Chinese renminbi, and Indian rupees in crossborder transactions in order to reduce its overall dependence on the dollar.

In a wider sense, the move marks another desperate step back to the tried and true methods of the military dictatorships that ruled before the handover to a quasi-civilian government in 2011, when Myanmar maintained a paranoid grip on the flows of foreign currency. Most notorious, the country then maintaining an “official” exchange rate that valued the kyat at dozens of times the actually existing, or “black market” rate.

While the current situation is yet to approach the full-blown distortions and excesses of the Ne Win era prior to 1988, with its disastrous demonetizations and pretensions to autarky, it is now very much moving in that direction.

(Blogger's notes: Following is the protest letter to the Myanmar Foreign Ministry from the Rangoon's Japanese Embassy which is seriously upset by the new draconian law forcing everybody in Burma to convert their US$ and foreign currency holding to useless Myanmar Kyat within one fucking day.) 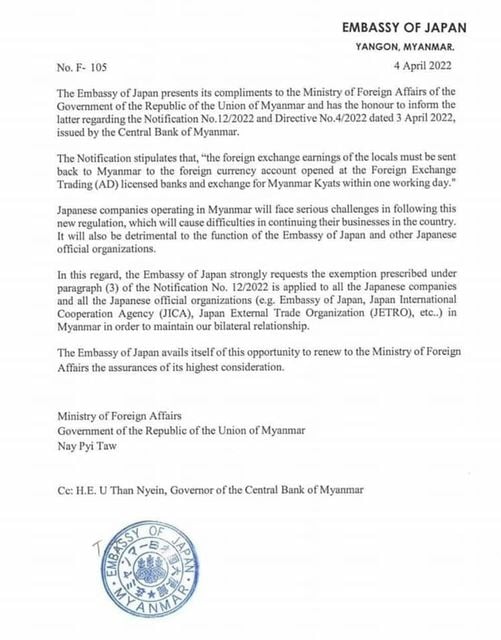 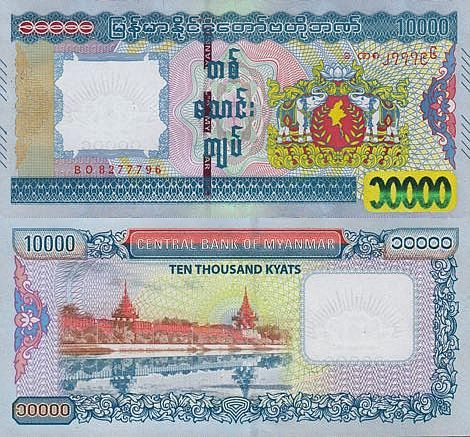 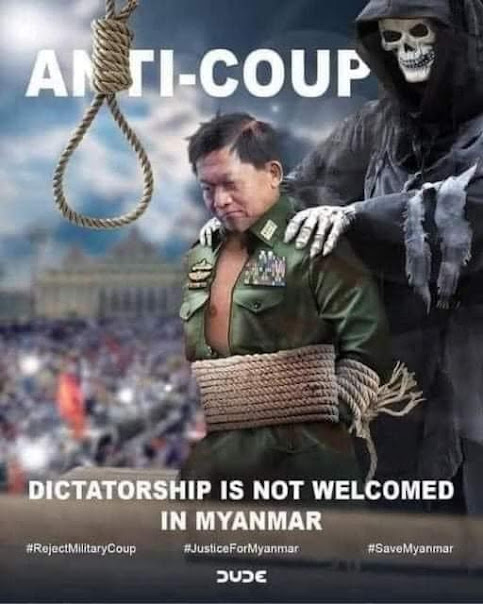