(Based on Burmese posts from The FACEBOOK in March-April 2022.)

Despite their brutal suppression of people’s resistance Myanmar Army is rapidly losing control of most of Burma Proper the homeland of most ethnic Burmese. PDF (the NLD’s armed resistance forces) and ethnic rebels are now controlling more than half of Myanmar formerly known as Burma.

For example in the Sagaing Division and Chin State formerly controlled absolutely by the 300-odd infantry battalions of North Western Military Division (Na-Ma-Kha) the Myanmar Army has already lost all the Burmese and Chin villages and minor towns. In the State and Divisional capital cities, Monywa and Hakha, the soldiers do not even dare to go outside of their fortified battalion compounds.

The reserves are being depleted rapidly by continuous fighting all over the country and the frontline battalions are having no rest or recuperation for  over a year now. Morale is so low that  thousands and thousands of Myanmar soldiers are deserting and/or joining the enemies.

The NUG (Rebelling National Unity Government) has recently declared that the Myanmar Army has already lost nearly one-half the country to their forces. Most army battalions in Sagaing Division, Chin State, Karen State, and Kachin State are now being trapped inside their fortified battalion compounds.

Recently in Karen State battlegrounds the army didn’t even retrieve their killed and wounded whenever an army camp had fallen into NUG hands. The abandoning of their own dead and wounded has huge demoralizing effects on the surviving army units in the area.

In Sagaing Division, even in the vicinity of State Capital City, Monywa, all the town gates and tax collecting posts are now being manned by armed thugs instead of soldiers and police. When The big police station in Butalin Town near Monywa was raided by the NUG-controlled local PDF units the army didn’t even send any reinforcement while all the 20-odd police men and their families were killed.

Three infantry battalions stationed in Moywa were scared and just stayed inside their fortified compounds. Even when they were forced directly by MAH and his hench-generals they went out quickly to the nearby villages and burned down the houses and instantly retreated back inside their compounds.

These mid-level commanders are no fighters but arse-licking pussies who are running away from the enemies instead of rushing towards the sounds of gunshots. Myanmar Army’s time-honored practice of promotion by merits has been sadly abandoned since that power-hungry and money-mad MAH became the Army-Chief in 2011.

Now they have lost the one-half of Burma and their own Burmese heartland, the middle of Burma Proper. This is the beginning of the sad end of Myanmar Army and stupid bastard MAH saw it. And in the morning of April-22 he broadcasted on army’s own Myawaddy TV an invitation to all ethnic insurgents in Burma for a ceasefire talk by May-9.

Motherfucker started the whole thing by his stupid coup and only option left for him, if he still wants his children and grand-children to get out alive of this mess, is to release ASSK and her NLD politicians detained and accept the 2020 election outcome and transfer the power back to the NLD government. 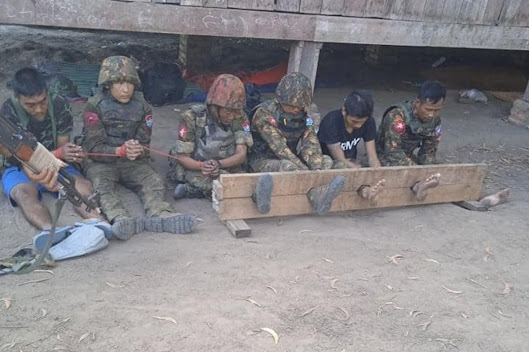