(Blaming it as a hacker attack Irrawaddy later removed this news report.)
Exiled Media outlets lose out on funding thanks to NLD
By THE IRRAWADDY Friday, March 11, 2011
Thailand based Irrawaddy Media Group and Norway based Democractic Voice Burma (DVB) claimed that they have lost over one third of their funding budget since the release of Burma's pro-democracy leader Aung Sann Suu Kyi from house arrest last year. This has lead to both media groups having to cut some of their programs and circulations.
Aung Zaw, pony-tailed Chief Editor of Irrawaddy Media Group, told Thai daily newspaper, Matichon during an interview that Burma's pro-democracy leader Aung San Suu Kyi and NLD as the main curlprit for drastic reduction and cuts in their funding by international donors. He accused Aung San Su Kyi of lobbying to donors to fund NLD's civil society and humanitarian projects instead of funding exiled media outlets. He said “Thanks to her request Irrawaddy lost over 1 Million US Dollars in funding and DVB lost 500,000 Euros from their annual budget.” 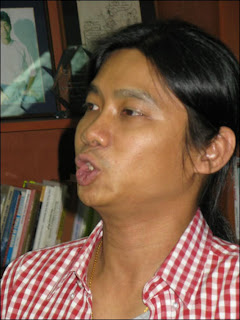 However, during a telephone interview yesterday, NLD spokeperson Nyan Win vehemently refuted Aung Zaw's accusations and explained that the NLD has been planning to implement its own media outlet for a while now and that it will no longer be depending upon exiled media groups to relay their message to the outside world.
Nyan Win disclosed the comments that were made by Daw Aung San Suu Kyi to the Norwegian Ambassador, HE. Katja Christina Nordgaard during a telephone conversation. Daw Aung San Suu Kyi appealed to Mrs. Nordgaard that the donations and funds which have been made available to exiled media groups such as DVB can and should be put to better use in social and humanitarian projects that NLD is carrying out inside the country.
The lady also express her bitter disappointment towards the rampant misappropriations of donations by chief editors of exiled media. She explained that it is a very well-known fact, both inside and outside the country, that only a fifth of the donated funds to the exiled media groups such as DVB and Irrawaddy were used for their intended purposes while the rest were being used to fund the chief editors' lavish lifestyles. She pointed out the recent decision taking by the Danish Government to stop funding Irrawaddy Media Group due to inappropriate use of funding as a fine example of funding abuse by exiled media groups.
Daw Aung San Suu Kyi's sentiments were echoed by a number of opposition activists and supporters across the globe. LSE educated scholar, Dr. Maung Zarni said "How can the circulation for 200 printed copies of a magazine and a website require $3 million a year budget and 60+ people in the office? You don’t need to have a degree in maths to see that there is something wrong with the figures, things just simply dont add up!".
Wai Hnin Pwint Thon, a UK based student activist and the daughter of Mya Aye, an imprisoned leader of 88 Generation Student Group, said "It is disgusting to learn that while my father and his compatriots are languishing in prisons, these hooligans looking so-called chief editors of exiled medias are leading playboy lifestyle. The money should be put to better use instead of wasting on these opportunists".

N.B. This is what Network Myanmar commented of this so-called fake article.

"The Irrawaddy" has reported that unauthorised articles have been sent from their website which they say has been hacked. We attach one such article, which does not appear to be the work of the regime in Myanmar, but is more likely to be the work of a disaffected exiled media reporter and accordingly to have been an "inside job". The article has several grammatical and spelling faults and could have been composed in haste. Its essence is to challenge the role of activist exile media now that Suu Kyi is free and the NLD is seeking to implement its own social welfare programmes.
Posted by Hla Oo at 7:39 PM