Where Rangoon River Meets the Sea

(This story  from hubpages was written by a Filipino sailor.) 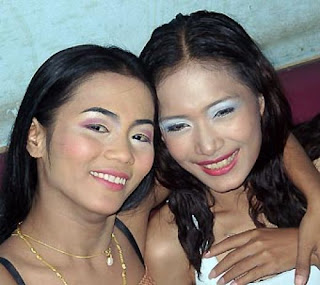 Yangon (formerly known as Rangoon) River in Myanmar (otherwise called as Burma) have many woven tales that are waiting to be heard. The military rule literally killed the tourism industry in the country. The house arrest of former lady president Aung San Suu Kyi enraged her followers and supporters and caused the disarray and apathy of the public.

The displacement caused by military junta crowded the river with boat people seeking temporary comfort onboard commercial vessels. Most Burmese women nowadays are engaging in sex trade and the prospective customers are usually sailors.

The April of 2001 saw our ship anchored to the delta formation at the mouth of Yangon river. More than ten members of customs and marine authorities of the military junta of Myanmar (now the union of Myanmar) boarded our panamax-type of tanker vessel (more than 39,000 gross tonnage deadweight). After signing important papers, some proceeded to the provision room and got some items ranging from meat to dairy products like milk and cheese). They’re backpacks were full when they left the ship.

We were about to load bunker fuel from their port but were not allowed to go ashore. Instead Myanmar girls boarded our vessel for ten days. Different stories of their lives were retold in a staccato English and how they thrive as boat people embarking from ship to ship.

Boat People
Military rule displaced many innocent people in Myanmar, especially those who support their lady president all the way.

Our captain gave us the go signal to have a girl partner for the next ten days. I didn’t want to because I was afraid to contract a STD (sexually transmitted disease), but he persuaded me to have one. He had chosen the most beautiful from them, but, my co-Filipino sailors like the girl that captain gave me.

Well, as a good subordinate, I said to the girl to go with my friend who has more money to spend for rest of their stay. I had to settle to other girl who’s more matured than me. My captain explained that those scenes were typical to all seafarers. It’s up to me to control my urge whenever women lure sailors to indulge in paid sex.

True to captain’s advise, I nearly had an STD when the condom failed to fit in my organ because my girl immediately inserted my organ to hers’. The good thing was it resulted only to UTI (urinary tract infection) Girls are more prone to UTI than boys. Other sailors who didn’t use protection contracted STD, like syphilis because others have already the virus in their bodies. They explained that once you use a girl with an infection, like HPV (human papilloma virus) it will trigger your old disease to come out.

Sex encounters lasted only for three days. Even the garbage of our captain had many used condoms, relayed by our steward. Next days were spent by girls helping chores in the galley, doing karaoke and having night cap at the ship’s saloon.

You will pity these Myanmar girls because they’re not brave enough to raise their voices for the change they’re wishing for their government system. They have to stay in the waters of Yangon in order to be safe, for a while.

My new woman-friend told me that she lost her husband during the attacks of military men in their village. She had nowhere else to run because his only child (a boy) was captured by those abusive men. She had to save money as much as she can in order to escape (again) the brothel she’d been in. Their mama-san or pimp (an old lady) always get all their money. She cannot even buy new undies, showing her worn out ones to me.

I told her that what they’re experiencing also happened in my country, Philippines. Many activists were put into jail and oftentimes kill or declared missing during the time of Marcos regime. I consoled her that hope is as near as the rays of the sun. As long as the day still exists, it will replace the darkest nights in their lives.

Note: One Filipino oiler suffered a ruptured appendics during our stay in Myanmar. He had to be operated in the local hospital for appendectomy. Although, medical practitioners said that they lack modern medical equipment, they tried their best to give comfort to their newfound patient at bay.
Posted by Hla Oo at 11:10 PM