(Maung Maung Khin originally was a student warrior from the Battalion-701 of notorious ABSDF-North and he acted in 2008 Sylvester Stallone’s overly-exaggerated anti-Burmese movie Rambo-4 as the ridiculously-sadist Burmese-Army-Colonel Tint. This post is the translation of his article from KOZAN Blog.)
For the armed revolutionaries like us Malaria was not a stranger at all. If we had medicines we used it. If we didn’t have medicines and pills we used the local method called Mackloun-Chit (the natives rigorously scratch the infected one’s body till he or she bleeds with thorns from a native medicinal plant). Too many comrades died of Malaria in the jungle we couldn’t even keep up recording their names. Sick and rest and fight as we kept on fighting the military dictatorship.
After walking for more than two days through the jungle our group had reached an abandoned Kachin farm.

Kachin Farm-flowers and Rice-circle
That abandoned-farm was right on the border of Battalion-5’s territory and Battalion-11’s. Moe Hnyin Township was the Battalion-5’s territory while Moe Gaung was the Battalion-11’s. So we were not that far from our destination. We met a local hunter there and he sold us some wildlife-jerky. So we took a rest there for about an hour and cooked our lunch.
These Kachin hidden villages or abandoned-farms (Ywar-bone) always have plenty of vegetables both domesticated and wild growing. So we could cook good meals there and all our men wanted to take a rest there during the long exhausting marches in the jungle.
Our lunch that day was plenty of grilled-jerky and vegetable soup and meshed grilled-tomatoes with farm-flowers (a Kachin jungle spice) and we had a rare great meal. After the lunch I even heard the man taking hangaws to the nearby waterhole to wash singing a song on his way down.
“I am fighting in our revolution, everyone must have human rights, and everyone should get human rights!” Seemed our men would sing active morale-raising songs whenever they had a good meal and they would sing depressing songs like Sai Htee Sai’s when their meal was bad.
We left that Ywar-bone and after two days walk we finally arrived at the camp of KIA TOC-4 (Tactical-operations-command-4). That camp was situated at North-east of Sar-mhaw, East of Hto-pu, and North-east of Moegaung. The camp was completely surrounded on three sides by the hilly ranges and only one side was a plain valley-land the site of an abandoned Kachin village.
Within two days from our arrival the District Leader Sein Aye’s Group from Moe-hnyin, Salan-kabar Htun Phe’s Group from Sar-hmaw, and NLD-LA (National League for Democracy – Liberated Areas) Group had arrived. Also from the KIA all the political commissars from the Battalians 5, 11, and 15 and Regiments 251 and 254 had arrived.
To protect the camp and important meeting I and a squad of new recruits were positioned at an protracted observation post on the old-village road across the little creek.
The Meeting Begins
Once all the representatives from the troops in the KIA TOC-4 region were there, the meeting was started on 11 July 1992 to discuss how to intensify the combined political and military offensives against the military Government and the army. 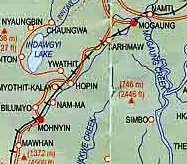