(This article by Thomas Fuller is direct from February 21 New York Times.)
Pity the Burmese dissident in exile. 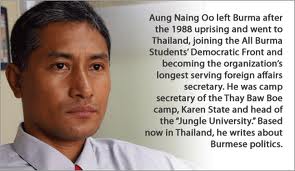 For more than two decades they were symbols of defiance against Myanmar’s military dictatorship, campaigning tirelessly in foreign countries for regime change. Now that the Myanmar government is earning plaudits for its program of reforms, hundreds of dissidents living abroad may need career counselling.
“It’s becoming difficult to find things to complain about,” said Aung Naing Oo, deputy director of the Vahu Development Institute, a Thailand-based organization formed by Burmese student activists who fled Myanmar in the late 1980s.
Such exiles, as they are known, watched from afar in recent months as Myanmar released hundreds of political prisoners, media censorship was relaxed, and the icon of Burmese democracy, Daw Aung San Suu Kyi, began campaigning for elected office.


“Things are moving on the inside,” said Mr. Aung Naing Oo, who traveled back to Myanmar in early February. “Everyone is basically hoping that they can go back.”
During the years of military rule and diplomatic isolation, Burmese exiles were key liaisons between Myanmar and the outside world. They successfully lobbied Western governments to punish Myanmar’s government with sanctions. A range of exile publications supplied opinionated but often valuable news and intelligence from sources inside the country.
A diplomatic cable written by a U.S. diplomat in Bangkok in 2008 estimated that there were 200 Burmese exile organizations in Thailand alone.
But the global Burmese-dissident business may soon be out of business. Funding for seminars is drying up, and foreign diplomats would rather fly into Myanmar than have lunch with exiled dissidents, as former President George W. Bush did during a visit to Thailand in 2008.
If the changes in Myanmar have surprised many observers of the country, they have been particularly bewildering and disorienting for exile groups, many of which are based here in Mae Sot, a Thai city on the Myanmar border that became a sort of headquarters for Burmese dissidents living abroad.
“I’ve spent half of my life with the revolution,” said Myat Thu, a former student activist who came to Thailand more than two decades ago. He lit a cigarette and recounted his escape through the jungles of eastern Myanmar after the military quashed a popular uprising in 1988.
He and his Thai wife, Khemitsara Ekkanasingha, run a cafe adorned with “Free Burma” stickers and pictures of Ms. Aung San Suu Kyi.
Last year, before many of the reforms in Myanmar were announced, Ms. Khemitsara introduced a campaign for the release of female political prisoners in Myanmar, printing postcards and organizing marches and vigils.
Of the 200 women she campaigned for, all have been released. Ms. Khemitsara said she was now considering championing other causes, mentioning the inequalities of the global market economy.
“We are going to put up a new banner,” she said, pointing to the wall. “Stop the dictatorship of capitalism!”
Other dissidents here say they want to continue working on Myanmar-related issues — many have a lingering mistrust of the government — but they are not sure how long they can stay in exile.
Naing Aung, a former student activist, helps run the Forum for Democracy in Burma, a group partly funded by the U.S. government that in recent years had held seminars on democracy and human rights. Now long-term funding for such meetings looks uncertain, he said.
“Donors are saying, ‘If you are just doing seminars in Thailand and printing publications, we won’t finance you,”’ he said.
Life is comfortable for many dissidents living in Thailand, Mr. Naing Aung said, and it’s hard to imagine leaving. “People have children and mortgages,” he said.
The Burmese diaspora spans the globe. In addition to Mae Sot, the northern city of Chiang Mai is home to many dissident organizations. Other prominent dissident groups are based in London, Washington and New Delhi.
The Democratic Voice of Burma, an organization that was instrumental in illicitly gathering and broadcasting images of the 2007 military crackdown in Myanmar, is headquartered in Norway. Some journalists working undercover for the group inside Myanmar were imprisoned (and have since been released). Now, Aye Chan Naing, the organization’s executive director and chief editor, says he is negotiating with the government about opening an official branch office inside the country.
“I think within one or two years, if things keep moving in this direction, a lot of dissidents will move back, and the funding will dry up,” he said. “Some groups have been warned that this is their last year of funding.”
The government of President Thein Sein has been trying to lure exiles back. Aung Min, a government minister, traveled to Thailand earlier this month to woo dissidents, according to Mr. Aye Chan Naing, who met with him.
“Ultimately if you’re an activist, you want to be where the action is,” said Mr. Aung Naing Oo of the Vahu Development Institute, which is based in Chiang Mai. “If that action is not where you are, you have to move.”
But a number of dissidents say they are unconvinced by the changes and are not considering returning home.
“I don’t believe,” said U Bo Kyi, the co-founder of an association based in Mae Sot that keeps a database of political prisoners.
Mr. Bo Kyi, who fled Myanmar 13 years ago, says he is waiting for Myanmar’s leaders — many of whom were top generals during the days of military rule — to acknowledge and make amends for imprisonments, torture and many other abuses.
“We do not want revenge,” he said. “But we need recognition and reparations by the government.” He is, above all, looking for an apology.
“Confession is very important for national reconciliation,” he said.
Posted by Hla Oo at 12:31 PM