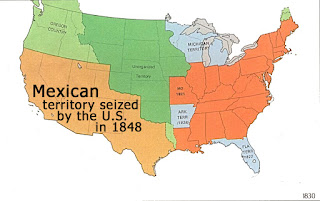 Much of Mexico’s history is unknown in the United States, and not taught in U.S. schools—and for a reason. A huge part of what is now the United States was originally Mexico’s territory. On September 16th 2010, Mexico celebrates the bicentenary of the revolution that led to its independence from Spain.

Mexico’s revolution began on September 16, 1810, when Miguel Hidalgo y Costilla freed prisoners who had been locked up by the ruling Spanish authorities. He called on the people to rebel by ringing church bells. Unfortunately, Hidalgo was captured and shot. However, he sparked a revolution that would that would lead to Mexico’s independence.

We live in Mexicali, which is in Baja (lower) California, but there was an Alta (upper) California, which was also part of Mexico. Alta California included land that today forms American states of California and Nevada and parts of today’s Arizona, Utah, New Mexico, western Colorado, and southwestern Wyoming. The capital of Alta California was Monterey, California.


In 1824, the Mexican territory of Tejas (Texas) became part of the Mexican state of Coahuila y Tejas. That same year, Mexico enacted a law which enabled all heads of household, regardless of race or immigrant status, to claim land in Mexico. This was a mistake on the part of Mexico, as it enabled immigrants from the United States to enter Texas, or Tejas as it was then called.

To get around the law, many American immigrants simply converted their slaves into indentured servants for life. As a consequence, in 1830, Mexico outlawed the immigration of United States citizens to Tejas. However, the flood of illegal American immigrants into Tejas continued.

Mexico believed that the growing influx of American immigrants to Tejas was part of a plot by the U.S. to take over the region. Unfortunately for Mexico, this proved to be the case. In spite of Mexico’s compromises, the Americans in Tejas wanted more. They demanded independent statehood which led to the Texas Revolution, in October 1835.

After several bloody battles the Mexican President, Santa Anna, was forced to sign the Treaty of Velasco in 1836, giving Texas its independence. Many Mexicans refused to accept the legality of this agreement, as Santa Anna was a prisoner of the Americans in Tejas at the time. Consequently, the newly declared Republic of Texas and Mexico began to engage in border fights.

To gain the upper hand in its battles with Mexico, Texas decided to join the United States. On July 4, 1845, the annexation of Texas by the United States was approved by the U.S. Congress. Mexico of course did not like the fact that its former province of Tejas had an American territory and border disputes continued. 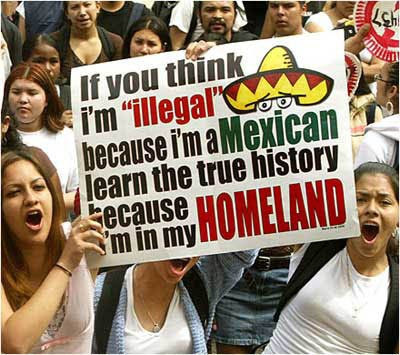 U.S. Declaration of War against Mexico

U.S. President James K. Polk, who had run for office advocating the annexation of Texas, declared war on Mexico on May 13, 1846. Immediately, the U.S. Army embarked on a three-pronged strategy designed to seize control of northern Mexico and force an early peace.

Two American armies moved south from Texas, while a third force under traveled west to Sante Fe, New Mexico and then to California. In July and August of 1846, the United States Navy seized the towns of Monterey and Los Angeles both in what is now the state of California. Despite a series of defeats, Mexico refused to surrender. To ensure his promised victory President Polk decided to seize Mexico City, the capital of Mexico.

On March 9, 1847, General Winfield Scott landed with an army of 12,000 men on the beaches near Veracruz. From this point, Scott and Santa Anna fought a series of battles from the coast inland toward Mexico City. Finally, on September 14, 1847, Mexico City fell to the Americans. On February 2, 1848, Mexico finally surrendered and signed The Treaty of Guadeloupe Hidalgo.

This treaty gave approximately 55% of Mexico’s territory to the U.S. including all or part of what are now the States of California, Nevada, Colorado, Wyoming, Utah, New Mexico, Arizona, Texas and part of Kansas. Yes, Americans in Wyoming and Kansas are living on land that once belonged to Mexico. In return, the U.S. agreed to pay $15 million to Mexico as “compensation” for the seized territory.

The war between Mexico and the U.S. and the fact that much of the U.S. was part of Mexico, helps us understand today’s relationship between the two countries. 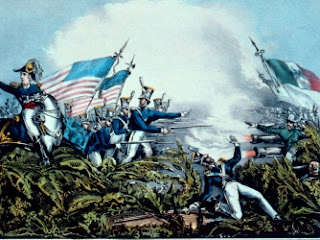 U.S. President James Polk oversaw the annexation of Texas in 1845. The northerners were against annexing Texas because they were afraid that the state would become a slave state. But eventually, Texas was annexed officially on June 16, 1845.

However, there were many issues that followed the annexation of Texas. One of them was Mexico. Mexico prejudiced the Texans for becoming independent, and when Texas was annexed by the United States, Mexico feared that the United States would come for land in Mexico next.

This led to the U.S.-Mexican War, which started in 1846 and ended in 1848. The United States claimed that the Rio Grande was the border between Mexico and the United States, but Mexico claimed otherwise. Mexico claimed that the Nueces River marked the boundary between Mexico and the U.S. As a result, U.S. president James K. Polk positioned troops in the disputed area.

On April 26, 1846, Mexican cavalry attacked the U.S. troops, and the U.S.-Mexican War began. Although, U.S. Congress officially declares war on May 13, 1846. By the end of the war, Mexico had lost about one-third of it’s territory including almost all of present-day California, Utah, Nevada, Arizona and New Mexico. The treaty that ended the war was called the Treaty of Guadalupe-Hidalgo.

The Theft of Mexican Territories, US Imperialism is born

Monroe Doctrine: “America for Americans.” Americans means citizens of the USA, of course. Manifest Destiny: the ideology that the US is destined to extend from the Atlantic to the Pacific coast; attacking and destroying the indigenous people of this land and stealing the Mexican territories was just part of the process.

1817-1829 – The colonization of Texas by settlers from the US began during the Mexican war of independence and at the expense of and against the wishes of those to the East (1817).

1821 – After independence, Mexico suffers widespread economic destruction and a commercial blockade enforced by defeated Spain. The US begins to weave its plans of conquest.

1823 – The US recognizes Mexico’s independence in exchange for agreements allowing further expansion of the USA.

1824 – Fall of the self proclaimed emperor Iturbide in Mexico and proclamation of the Federal Republic. 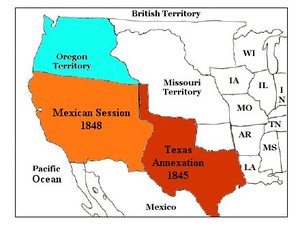 1825 – Mexican Congress authorizes the settlement of US colonizers (mainly English or Anglo-Saxons) in the state of Texas. These 300 slave-owning families were originally allowed to establish themselves in a specific limited area, but quickly expanded their plantations taking up ever more Mexican land. This soon turned into a full-scale invasion with the creation of landholders owning huge areas, alarming the Mexican government with the rapid escalation.

1829 – Mexico expedites the decree of abolition. The Mexican government (under President Vicente Guerrero) attempts to implement the decree abolishing slavery effective in Texas and tries to stop US colonization there. The USA itself would not abolish slavery until 1865, as part of the conclusion of the US Civil War.

1830 – President Anastasio Bustamante prohibits the entry of more US colonizers and expels the US ambassador Poinsett for interfering in the internal affairs of Mexico. The same ambassador was involved later in “buying” Texas from Mexico.

1835 – The independence and the subsequent US annexation of Texas is on the horizon. Mexico votes in a new constitution and becomes consumed with political chaos due to division between contending political forces there.

The Texas colonizers form a militia and stage an armed uprising against the government of Santa Ana under the pretext that the federal system had become too centralized. The colonizers’ militia is financed directly by the US with weapons, money, ammunition and even gunboats, while the US publicly claims neutrality.

1836 – The US government militarily defeats the Mexican army in the battle of the Rio San Jacinto, proclaiming Texas as an “independent” country. Mexico does not recognize the independence of Texas.

1838-1839 – First French intervention in Mexico (War of the Pastries). This intervention helps the North Americans in their plans for annexation.

1843 – The Mexican government declares that they consider the annexation of Texas an act of war against Mexico.

1846 – President Polk sends troops toward the Mexican territory and declares war on Mexico through the first armed conflicts with Mexican troops.

1847 – The US occupies the territories of “Alta California” and “Nuevo Mexico.” These territories are now known as the states of New Mexico, Arizona, Colorado, Nevada and California. In March of 1847 the US invades Mexico through the Port of Vera Cruz and on September 14th they occupy Mexico City.

1848 – February, with the US flag waving in the Zocalo (main square) of Mexico City, the US forces Mexico to sign the “Treaty of Guadalupe Hidalgo” by which the US appropriates more than a million square miles of Mexican territory.

To conceal this historic theft of Mexican territory and portray it for history as an economic transaction, the US pays Mexico the insignificant sum of 15 million dollars. The land stolen from Mexico constitutes almost one third of the current USA and more than half of what was then Mexico. US history books claim the territories were “transferred.”

1848 – 1855 – The California Gold Rush helps complete the Westward expansion. At the time the US concern was to repopulate that vast territory with US settlers. The Gold Rush helped solve this problem. 300,000 people come to California during these years from other parts of the US and other countries.

1862 – 1867 – The Second French intervention in Mexico sees the installation of Emperor Maximillian from France under the reign and with the support of Napoleon III.

1865 – Slavery is abolished in the USA at the conclusion of the US Civil War (1861-1865) between the North and the slavery-supporting South (the Confederacy), which included Texas. The maintenance of slavery in Texas was one of the key factors in the previous theft of Mexican lands. Texas had been a key state in the decision of the South to secede from the US, separating themselves from the Northern states.


1867 – The French invasion is defeated on Cinco de Mayo (The Battle of May 5th), but the war with France continues for several more years. The US celebrates this French defeat as a victory against European imperialism, notwithstanding its own conquest under the Monroe Doctrine still being enforced. For Mexicanos, Cinco de Mayo is not a celebration sponsored by Budweiser, but rather the beginning of a period of re-composition of their country that continues to this day.