(Phillip Sherwell’s Article direct from The TELEGRAPH on 10 March 2016.)

Aung San Suu Kyi will not be Burma's president. Htin Kyaw, an Oxford-educated writer who once drove Aung San Suu Kyi to meetings, named as her choice for president after Nobel laureate loses fight to secure top job.

Aung San Suu Kyi has nominated an Oxford-educated writer who once served as her personal driver as her “puppet” president after weeks of febrile speculation and intense negotiations. The nomination of her long-time aide Htin Kyaw marks the end – for now – of her dream of leading the country out of five decades of military rule. The Nobel laureate circulated a note to her new MPs apologising for "not fully fulfilling the people's desire" but asked for support "to reach the goal peacefully”.

Ms Suu Kyi and her National League for Democracy (NLD) party won a landslide electoral victory in November, but she is barred from holding the presidency herself under a junta-drafted 2008 constitution because her children are foreign citizens. Ms Suu Kyi has pledged that she would run the country regardless.


Htin Kyaw, 69, hails from an influential Burmese-Mon political family and currently heads the Suu Kyi charitable foundation in the country also known as Myanmar. He is the son of a well-known poet who won a seat in the 1990 elections and the son-in-law of a co-founder of the NLD and former party spokesman. His wife Su Su Lwin is a new NLD MP who chairs the parliament’s international relations committee.

Htin Kyaw graduated from the Rangoon Institute of Economics in 1962 and received a second degree from Oxford in 1972 at a time when Ms Suu Kyi was living there with her husband, Michael Aris, a British academic. He is a genial figure, a writer who uses the pen-name Dala Ban (Mon warrior) and staunchly loyal. During her 15 years of house arrest, he was one of a handful of trusted aides allowed to see her. And during her sporadic releases, he also served as her personal driver.

Ms Suu Kyi, 70, finally accepted defeat in behind-the-scenes negotiations to persuade the military to suspend the constitutional clause that thwarts her ambition to lead her country.

Htin Kyaw was one of the candidates nominated on Thursday morning for the three vice-president positions, ending weeks of Burma’s most intense political parlour game. Henry Van Thio, an ethnic Chin NLD politician, was also nominated while the third position will go to a serving officer put forward by the military bloc of MPs.

In a confirmation vote expected next week, the new NLD-dominated parliament will choose the country’s next president from the three vice-presidential nominees after they have been vetted. As he is Ms Suu Kyi’s preferred nominee, Htin Kyaw is now a certainty to be elected as president of the first freely elected government since 1960.

The NLD won a landslide victory in elections in November in a resounding endorsement of Ms Suu Kyi, who has led the democracy movement since returning to her homeland from Oxford in 1988. Her father Aung San, Burma’s liberation hero, was assassinated in 1947 just months before the country’s independence from Britain.

She has been trying to strike a deal that would allow her to take the top job in talks with the generals who once jailed her but who last year recognised the result of the country’s first democratic elections in 55 years.

But they only allowed that vote to take place on their terms. They will maintain three key ministries and 25 per cent of MPs are military appointees who command a veto over changing the constitution.

And most notably, that charter includes a clause that disqualifies any potential candidate for the presidency who has direct foreign family ties. Ms Suu Kyi’s two adult sons are British citizens, as was her late husband. The NLD and its leader still harbour hopes that they can persuade the military to lift the bar within a year or two if the generals are satisfied with their handling of the country.

But that is another means by which the military can continue to exert its influence over the country. And it is not clear how the failed talks of recent weeks may have poisoned relations between Ms Suu Kyi and the generals. But most immediately, the focus will be on how Ms Suu Kyi intends to run the country when the new NLD government takes power on April 1 from the defeated military-backed administration. 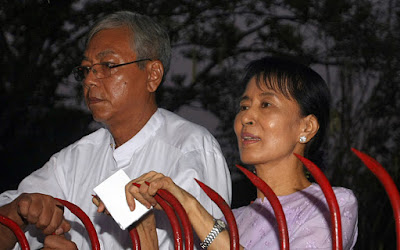 Before the election, Ms Suu Kyi pledged to run the country from a position “above the presidency”, while close aides have said that the person nominated will effectively be a “puppet” or a “proxy”. But she has not outlined her precise role or how she will play puppet-master to a president.

One option is that she might mirror the approach adopted in India by Sonia Gandhi, who wielded huge influence over her Congress party's administrations despite having no official government role.

There has also been talk that she may take up an important Cabinet position, with the role of foreign minister once touted. But under Burma’s complex political system, that would require her to cede her role as NLD leader.

On Wednesday, new MPs – many of them former political prisoners and dissidents – were given lessons in how to vote for the presidential candidates and subjected to rigorous English proficiency tests as part of their training.


But in an atmosphere of tense excitement in the junta-built capital Naypyidaw, they had remained as in the dark as outside observers about Ms Suu Kyi’s closely-guarded choice of president until Thursday morning.
Posted by Hla Oo at 6:29 AM