Trump Hits New Poll High as Latinos Mobilize. Donald Trump has emerged unscathed and with higher ratings than ever before following his “block Muslim immigration” comments—and now Latinos across America have promised to “flood” the voter rolls with millions of immigrants to defeat him if he should win the Republican nomination.

According to the results of the latest Monmouth University poll surveying voters identifying as Republican or independents leaning toward the GOP, Trump took 41 percent, nearly tripling the support of his closest rival, Texas Senator Ted Cruz, who took 14 percent, while all other candidates polled well below 5 percent.

According to the press release which accompanied the poll results, the new figures “represent a big jump in Trump’s support and a rearrangement of the deck chairs in the second tier. After polling between 26 percent and 30 percent in Monmouth polls throughout the late summer and fall, Trump’s showing has increased by 13 points from his 28 percent result in mid-October.


“It has become abundantly clear that Trump is giving his supporters exactly what they want,” said Patrick Murray, director of the independent Monmouth University Polling Institute in West Long Branch, NJ.

Among various demographic groups, Trump picked up 13 points among those with a high school education, earning 54 percent support with that group, and 11 points with those identifying with the Tea Party, earning 52 percent with that group.

At the same time, Latino activists have vowed to “flood voter rolls” with immigrants to make sure that whoever wins the Democratic Party’s nomination will beat Trump should he win the Republican nomination.

According to a report in the Washington Times, Latino activists have vowed to sign up one million immigrants—mostly Mexicans—for citizenship and then quickly register them to vote in time “to punish Donald Trump and his fellow Republicans at the polls in November for their harsh rhetoric.”

They claim that the rush of new voters could make a difference in the presidential race, and also in key Senate races in Illinois and Florida, where Republicans will be hard-pressed to hold on to their seats because of the rapidly changing racial demographics in America.

According to official figures, there are nearly nine million legal immigrants already eligible to become citizens, making the goal of signing up just one million very attainable.

Furthermore, the Latino activists say, they are “counting on energizing another two million Hispanic citizens who have turned 18 since 2012” and who they believe will turn out to vote against the Republican Party.

According to the far leftist group American Progress, a total of 800,000 Latinos turn 18 each year—one every 30 seconds or more than 66,000 individuals per month. Ninety-three percent of Latino children are US-born citizens and will be eligible to vote when they reach age 18.

More than 11.2 million Latinos voted in the 2012 presidential election and Latino voters made up 8.4 percent of the 2012 voting electorate. This share is 15 percent higher than 2008, an increase of 1.5 million voters.

All of this means that should Trump win the Republican Party nomination, he will need to have huge numbers—in excess of 66 percent—of whites voting for him in order to stand any chance of winning. These voters—if they exist—will have to come from the large number of white Americans who have not voted until now, most likely because they have had no suitable candidate for whom to make their mark.

One thing is definite: if Trump does not win, the racial demographic destruction of America will be guaranteed, and the 2016 election will be noted as the last chance that white America had to vote itself out of extinction. 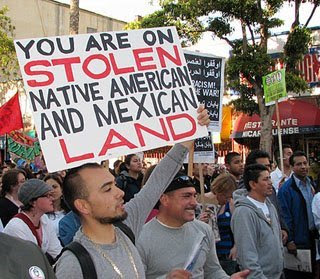 Some 75 percent of registered Republican “Latinos” voted against Donald Trump in the Texas primaries, providing a lesson in America’s shifting racial demographic realities—and a foretaste of the massive national election obstacle which awaits him should he succeed in winning the party’s nomination. 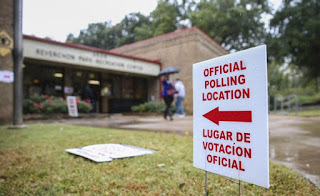 (A Dallas polling station sign in English and Spanish tells the tale of racial demographic shift in Texas.)


Despite winning seven of the eleven states up for grabs during yesterday’s “Super Tuesday” primaries, Trump does not yet have either the nomination or the national election in the bag, as a detailed examination of the turnout demonstrates. In fact, the strong Latino anti-Trump vote was the factor which allowed Ted Cruz to win in Texas, where he polled 1,230,159 votes to Trump’s 752,659.

Some 35 percent of Republican-registered Latinos in Texas voted for Ted Cruz, while 27 percent voted for Marco Rubio, adhering to an expected racial divide based upon the facts that Trump’s competitors both have “Latino” backgrounds and that that Trump has run an anti-illegal immigration campaign—an issue which directly affects the vast majority of Hispanics currently in the US.

A record 2.8 million votes were cast in the Republican primary in Texas. Among Republicans, 10 percent of the electorate in Texas are Latino, and the state has been majority nonwhite for several years, with the most recent US Census Bureau figures reporting that the state is currently only 45 percent white. It is no coincidence that the areas in Texas which reported the strongest Trump votes were in the southwest—which is also the whitest remaining part of that state.

The US Census Bureau reports that on a national level, America is currently only 63.7 percent white. This means that, as happened in Texas, a combination of white liberals and racial block voting by nonwhites presents Trump’s most serious challenge.

This is particularly relevant, as Texas has demonstrated, in states which hold the largest number of Electoral College votes. These are the states with the largest populations—such as California—and which are also the most heavily nonwhite, and therefore the most anti-Trump. 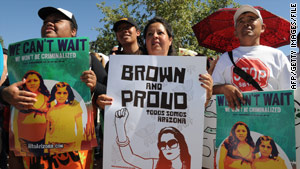 Finally, it would be a mistake to presume that Trump has the Republican nomination in the bag after the Super Tuesday primaries. With 1,237 delegate votes needed to secure the nomination, Trump now has 285, compared to Cruz’s 161, and Rubio’s 87. (The other two candidates still in the race, Kasich and Carson, have 25 and 8 respectively.)

Cruz’s victories yesterday in Texas, Alaska, and Oklahoma means that he is still definitely in the race, especially with large (and anti-Trump) state primaries such as California (which votes in early June) still to come.

Trump supporters seeking to celebrate his primary victory would be well-advised to be restrained, and even then, to bear in mind the massive racial electoral hurdle he faces even if he does win the Republican nomination.

The full Republican Super Tuesday results are as follows: