(Alain Wagner’s Article direct from The GATES OF VIENNA on 19 March 2016.) 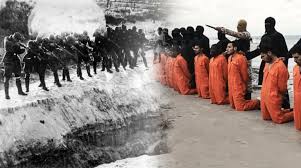 The following article by Alain Wagner of Vérité, Valeurs et Démocratie was originally published in French at the VV&D website. Many thanks to Nathalie for the translation. Nazis Versus Muslims Posted on March 19, 2016 by Baron Bodissey.

I regularly receive a newsletter written by a female friend who is a professor of philosophy in Canada. Her most recent newsletter dealt with the apparent discrepancy between how “Joe Public” viewed Muslims versus how Nazis were perceived, and what it revealed about the nature of the modern psyche.

The case of the Nazis

In the mind of the overwhelming majority of people today, all Nazis without exception are directly linked to the Final Solution, to the slaughter of the Jews, the Gypsies and of homosexuals and ultimately to the extermination camps.


Nobody in their right mind would dare to suggest it might have been the fault of a few Nazi extremists whose actions gave a bad name to a political set of ideas which might have otherwise been viewed as quite respectable. All Nazis are tarred with the same brush: all shared the same ideology, the same set of beliefs, all had a hand in it and all were guilty of a horrendous crime.

My friend rightly reminded her readers that the Final Solution was only fully conceptualised and implemented in the year 1942, that the Nazi regime kept a tight lid on their plans, and that the existence of a police state made it very difficult for information to be circulated. There was at that time no Facebook on which to post video-clips of SS soldiers herding the inmates into the death camps, and no Internet to publish photos of grinning torturers in the process of putting their victims to death. 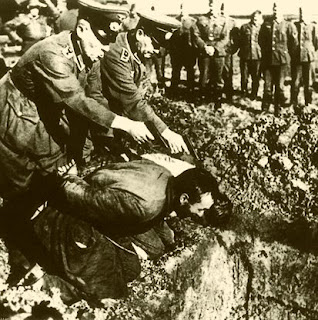 It is therefore perfectly plausible that a good number of Nazis weren’t in the know and remained ignorant of what was happening in the extermination camps masquerading as concentration camps.

This does not mean that they were either philo-Semitic or great lovers of democracy, but it does render the equation of Nazi = Holocaust rather moot, as not all Nazis were party to the extermination plan. It is, therefore, within the realm of possibility that amongst those opportunistic individuals who joined the party to further their social or professional standing, not all were monsters.

The conclusion drawn is that not all Nazis were killers and that, had they been privy to the real darkness at the heart of their ideology, many would probably have turned away in disgust and revulsion.

We might have called these “moderates” or “reformed-Nazis”, whilst the rest of them, those who could quietly contemplate unspeakable horrors and still remain faithful to the Nazi party were complicit in the crime, far past any possible redemption and as guilty as they come.

Muslims and a case of double standards

The way Muslims are perceived is exactly the other way round. Even though all Muslims, including each and every Taliban and each and every killer from the Islamic State, belong part and parcel to the same ideological core set of beliefs, (i.e Islam), which is characterised by the worship of the same Book (the Koran), the same man as an example to follow (Mohammed), the same common law (sharia), we are told in no uncertain terms that we must not on any account let some rotten apples spoil the whole bunch.

To be totally honest, I do agree with this point of view. I always like to remind people in the audience when I am giving a lecture that generalisations always lead to falsehoods and unjust prejudices, and that one mustn’t conflate what people think and what they are. Individuals are not equivalent to their ideology, and ideas aren’t people.

What made me think long and hard is the difference in treatment when we start comparing the Nazis with our current set of Muslims: we are ordered to not lump all Muslims together, or as the French put it “Padamalgam”, which freezes our powers of thinking and then forbids us to question those Muslims who are currently living in our societies in accordance to their obedience to Islamic doctrine. 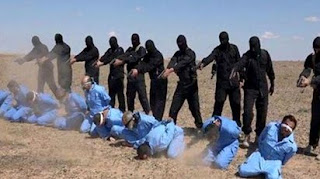 Likewise, this injunction to “never ever lump together” aims to force us to automatically absolve any Muslim who has not committed a violent act from any guilt by association, even moral guilt. Ideology does not equal the man; nonetheless adherence to it remains a conscious, deliberate act which engages individual responsibility

I obviously do not mean to suggest that all Muslims are terrorists or supporters of the Islamic State, or that they they may have killed somebody or are planning to at some point in the future. What we must ask ourselves is this: in the name of what exactly are we suppose to refrain from asking these people whom we are told are our fellow citizens, to clarify their position as to their obedience to Islamic ideology?

An Islamic ideology which, as anybody who is honest enough would be hard pressed to deny, all criminals who slaughter, rape and enslave in the name of Islam have shared throughout history.

We also owe it to ourselves to ask in whose name we should accept without any further questioning those “This is not Islam” retorts, which are an insult to our intelligence and a slap in the face of tangible reality, whenever heinous crimes and intolerable behaviours are indulged in in the name of Islam.

Disingenuous excuses must stop and responsibilities must be assumed

Why, exactly, should we carry on accepting the premise that Muslims are ignorant of the tenets of Islam, that they cannot know its content? Is the objective and unchanging doctrine of Islam and the behaviours that are allowed or proscribed by it totally unknowable? Of course not! What do you think they teach in Islamic universities? How would their imams otherwise know and teach their own doctrine?

The political, discriminatory and violent nature of Islam is a solidly established fact. What a relentless process of disinformation aimed to sell us as a “religion just like any others” finally revealed its true colours to all unbiased observers: Islam is, at its core, a totalitarian ideology.

The “spiritual dimension” found in this ideology should not divert attention from its true nature; specific mystical belief systems, books, supreme leaders and the project of a type of society for the entire humanity were also to be found in Nazism and the Chinese brand of communism. 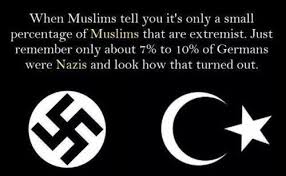 Why should we continue to accept, as a given, that those Muslims living in our countries must not be under the obligation to learn the contents of the Islamic doctrine, in the light of what is happening in the world today, and then draw the obvious conclusions: should they abide by it or not?

The Muslims currently living in Western societies cannot, in any way, shape or form, be compared to the Germans of yesteryear. They can freely access the history of Islam and its long retinue of horrors and unspeakable crimes, or read books describing sharia law or the life of the man they are supposed to model their lives on.

In contrast with the Germans who lived in a police state, they are free to reject without risk a creed whose tenets are antithetical to human freedom and dignity. It would be quite condescending as well as patronising to view those Muslims who live in the West as being incapable of getting hold of the proper information and of making a responsible choice.

The West offers Muslims the amazing opportunity to free themselves from the shackles of Muslim ideology and become free human beings, respectful of the natural rights and freedoms enjoyed by their fellow citizens.

Who would then carry on insisting that Muslims cannot freely choose their own destiny, decide where their loyalty lies and assume responsibility for the choices that they make? Why do we insist on humouring them so as to not offend their supposed sensibilities, and why do we carry on treating them as though they were irresponsible, illiterate, or slightly retarded children?

Today we share our society with people who may or may not adhere to an ideology that’s extremely violent, discriminatory and destructive of our way of life. Knowing where these people stand is now a question of survival.

And in view of the consequences that necessarily follow this ideology when it is put into practise in the real world, why exactly should we be satisfied with being shrugged off, with getting an ambiguous reply accompanied with the usual protests about a so-called stigmatisation of their faith?

Adherence or non-adherence to Islamic ideology and to sharia law must no longer be a question unasked and unspoken. This question, left unasked, is the breeding ground which will beget chaos and the tearing asunder of our society. And today, people die for this on French soil.

To finally ask the question that has, up till now, been left unsaid is to force a choice, and so choosing means to renounce one of the choices. It means either:

Disown those who adhere to Islamic ideology, to sharia law and the inevitable violence and oppression that follow in their wake, or, Abandon the idea of being part of Western societies, which are based upon respect for liberty and the freedoms enjoyed by all citizens.

There can be no compromise, no meeting part way, no grey areas: that time has come and gone. Our duty to keep our societies safe gives us the right to ask Muslims the following question: “Where do you stand: for or against sharia law?” We mustn’t let ourselves be fobbed off.

The Muslims living among us must give a clear reply, in words and in deeds, acknowledging that they reject once and for all sharia law and all that it entails. Failure to do so would necessarily mean that they endorse the horrors committed by Islam and should thus rightly be considered as today’s Nazis. 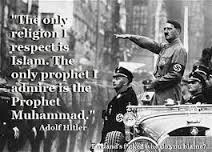 (The plain and simple fact is that one cannot be a Moslem and renounce Sharia law at the same time. Sharia is a cornerstone of Islam just as Mohamed is, they are indivisible.

Although many Moslems cannot practice Sharia in societies where their numbers are small, that changes as their numbers grow. As soon as they get a mosque they get an Imam or Mullah and with that they get enforcement of Sharia in their community. Once they grow sufficiently they enforce Sharia on others, even against the laws of the land, and are aided by dhimi officials.


If ever a Moslem renounces Sharia they become apostate punishable by execution. It is the same as renouncing Mohamed or renouncing the Koran.)
Posted by Hla Oo at 6:32 PM