(Compilation of articles from various sources in March 2016.)

Mounting evidence are pointing that TATP (triacetone triperoxide) was used in both Paris and Brussels attacks. The taxi driver who brought three Muslim bombers to the Brussels airport led investigators back to the apartment where he picked them up, where investigators discovered 33 pounds of a highly volatile explosive called TATP, the same used in the Islamic State attacks in Paris last November.

Authorities also found chemicals used to make TATP, including 150 liters of acetone and 30 liters of hydrogen peroxide, nails and screws, an Islamic State flag, and according to Belgian media, a fourth bomb intended for the airport attack that wouldn’t fit in the taxi at the last moment.

TATP has become the explosive of choice among Islamic extremist groups operating underground in Europe because it’s easy to get hold of its ingredients (Hydrogen Peroxide and Acetone) and relatively hard to detect.


Hydrogen peroxide can be found in household bleach and acetone in nail polish remover. Most airline security is primed to detected nitrogen-based explosives, not peroxide-based TATP.

But because TATP is so volatile — earning it the nickname “The Mother of Satan”— it takes a skilled bomb-maker to build and handle a TATP bomb, and to stop it from exploding before the appointed time. This has led some experts to conclude that the attackers in Brussels and Paris received support from a highly trained cell of Islamic State operatives in Europe, including bomb-making experts.

So security forces are not searching in the dark. While hydrogen peroxide-based explosives are harder to detect, a foiled 2006 plot to put TATP explosives on planes led airlines to ban most liquids on flights. Dogs can be trained by security forces to detect the odor of TATP. And experts, such as University of Rhode Island professor Otto Gregory, are working on specialized TATP sensors to make it even easier to detect, the New York Times reports.

The homemade explosive TATP is a chemical nightmare

While the world mourns those who died in the November 13 Paris attacks, investigators are hard at work piecing together the terrorist plot that has killed at least 129 people and seriously injured 99 others. One question Parisian authorities have answered, however, is what explosives the attackers set off during the attacks.

Paris prosecutor Francois Molins told reporters on November 14 that seven of eight attackers set off shrapnel-packed bomb vests designed for causing the "maximum number of casualties while committing suicide." The key ingredient in the bombs, Molins said, was a compound called triacetone triperoxide, or TATP — a crystalline powder that is a nightmare to terrorists as well as authorities.

TATP is easy to make and hard to detect, but is also incredibly unstable. In fact, all it takes is a firm tap to explode TATP with a force that's about 80% as strong as TNT. (Which is why it has gained an infamous reputation as "the Mother of Satan" among terrorists who make it, according to The Future of Things.) 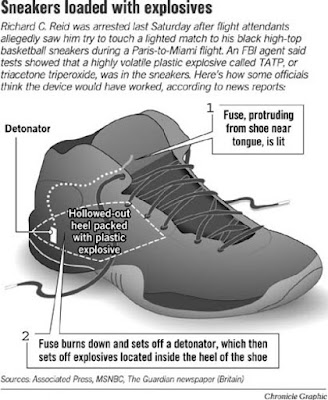 The infamous "shoe bomber" used TATP in 2001, as did terrorists in London in 2005 and 2006. The chemical was also in bombs detonated at the University of Oklahoma in 2005 and Texas City in 2006, according to explosives researchers at Northeastern University.

"TATP and other explosives of the peroxide family are used extensively by terrorist organizations around the world because they are easy to prepare and very difficult to detect," Ehud Keinan, a chemist at the Technion-Israel Institute of Technology, said in a 2005 press release about his research of the chemical.

You might recognize two chemicals in TATP's full name — triacetone triperoxide — because they're ingredients you can find in your local pharmacy's cosmetics and first aid isles.

"TATP can be easily prepared in a basement lab using commercially available starting materials," according to GlobalSecurity.org, which also notes "it's easy to blow yourself up when you make it."

Jimmie Oxley, an explosives researcher at the University of Rhode Island, told Tech Insider by email that making TATP is as easy as "baking a cake. We have done a lot of work trying to prevent its synthesis," wrote Oxley, who has experimented with adding trace chemicals to hydrogen peroxide in hopes of foiling TATP's homemade production. "It isn't easy to do and the ingredients are very common."

One reason TATP is difficult to detect is because it does not contain nitrogen, a key component of homemade "fertilizer" bombs that security scanners are now very good at finding. Each molecule contains only hydrogen, oxygen, and carbon — some of the most common elements on Earth — shaped in a ring.

The explosive power of TATP has puzzled scientists since its discovery in 1895. Unlike nitrogen-based bomb materials, which store up energy as they're cooked into explosive form, TATP can be made at room temperature — no flames required. So where does it get its explosive energy, if not by heating?


It wasn't until 2005 that Keinan figured out detonating TATP is more like a massive air blast than a fire bomb. When a crystal of the explosive is rattled hard enough, each solid molecule instantly breaks into four gas molecules. "Although the gas is at room temperature, it has the same density as the solid, and four times as many molecules, so it has 200 times the pressure of the surrounding air," according to the release about Keinan and his colleagues' 2005 study of TATP.

"This enormous pressure — one-[and-a-half] tons per square inch — then pushes outward, creating an explosive force" on par with TNT, states the release. "In a TATP explosion, the gas molecules give up their energy of motion to the surroundings, in the process creating the shock wave that does the damage."

Can we detect it? Scientists are now working feverishly to create practical ways to find TATP before it can be used to kill innocent people. ACRO Security Technologies, a company founded by Keinan, has created a disposable marker-size "peroxide explosives tester," or ACRO-P.E.T.

"The ACRO-P.E.T. provides an immediate answer to whether a suspicious material that has been discovered somewhere ... contains even minute quantities of a peroxide-based explosive," Keinan told The Future of Things.

Other researchers are working on ways to find TATP when it's being transported, and without the need for a direct chemical test like Keinan's device. In 2011, for example, scientists at Hitachi in Japan created a machine that sucks in air from around a passenger and — in two seconds — can sniff out minute traces of TATP.

A German research group also announced this summer that large amounts of TATP can be detected in transit. Because the chemical is so touchy, they say in their study, it's usually dissolved in a special liquid before being moved around — and that fluid's unique odor is what they hope security scanners of the future could sniff out.

Paris (AFP) - Used by jihadists everywhere from Paris and Brussels to the battlefields of Syria and Iraq, the easy-to-make and deadly explosive TATP -- known as "the mother of Satan" -- has become the explosive of choice for the Islamic State group.

A familiar set of ingredients were found in a jihadist hideout after this week's attacks in Brussels, Belgian prosecutor Frederic Van Leeuw said Wednesday, listing 150 litres (40 US gallons) of acetone, 30 litres of oxygenated water, detonators, and a suitcase full of nails and screws. They are the essential components of Triacetone Triperoxide, or TATP, of which 15 kilogrammes (33 pounds) were found in the apartment.

Discovered at the end of the 19th century by a German chemist, TATP is a homemade explosive created by mixing precise quantities of acetone, oxygenated water and sulfuric, hydrochloric or nitric acid -- all of which are easily available in high street stores.

Nail polish remover is essentially acetone, while oxygenated water is a commonly used disinfectant. The mixture creates a coarse powder of white crystals that requires only a basic detonator to explode, triggering a huge blast of burning gas.

Jihadists have set up entire labs -- at first backroom affairs, but increasingly reaching industrial levels -- to produce TATP and other explosive materials in Syria and Iraq. In a report published in February, the NGO Conflict Armament Research said 51 companies had supplied the components needed to make homemade explosives at semi-industrial levels to the Islamic State group (IS). The companies were spread across 20 countries, including Turkey and Russia, but also Belgium and the United States. 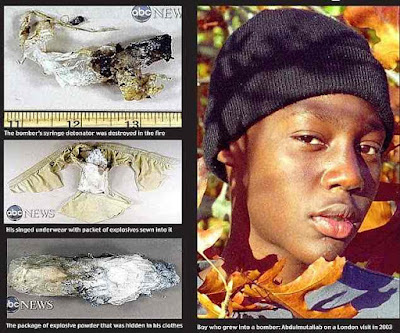 "Contrary to what is sometimes said, watching a tutorial on the Internet is not enough," said an explosives expert with the French army, who asked not to be named. "Someone has to show you how to do it at least once. But there isn't a shortage of instructors among the guys in the Islamic State in Syria and Iraq. And once you've been shown, you can do it in your kitchen."

The most delicate part is adding the acid to the mixture, which lets off heat and can catch fire, but a simple mask is all that is normally needed for protection.

TATP was used in the suicide vests of the attackers in Paris on November 13, and early investigations suggest it was also used by the bombers in Tuesday's attacks on Brussels airport and a metro station that left 31 dead. Another 270 people were injured, many of them sustaining severe burns.

A detonator can be made with a thin metal tube filled with paste and linked to two electric wires that will spark and trigger a flame when connected. But they can just as easily be bought ready made from a shop.

Salah Abdeslam, one of the suspected Paris attackers who was arrested in Brussels last week, bought a dozen pyrotechnic detonators at a fireworks store in the Paris region without raising the slightest suspicion.

"The main problem posed by TATP is the easy availability of ingredients," said a French counter-terrorism official, speaking on condition of anonymity. "We can monitor sales of oxygenated water, but if these guys are smart enough, they will buy small quantities from 20 pharmacies. It's the same for acetone and acid."


The official said his team had spent an afternoon learning how to make explosives purely with items bought from a DIY store. "It was worryingly easy," he said. "In half an hour, we had made an explosive. Half an hour later, we had blown it up. And the explosion was big." 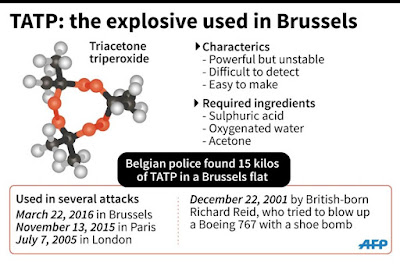