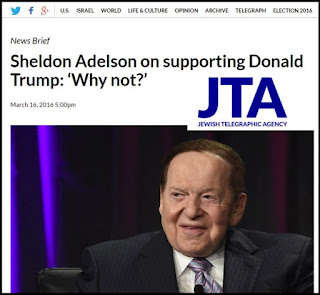 Adelson, better known for bankrolling other pro-Israel Republican candidates, has separately been quoted as saying “why not” to a direct question of whether he was going to support Trump or not.

The decision by Adelson to authorize the publication of the pro-Trump article in Israel—he keeps a tight rein on his newspaper, which fanatically supports Benjamin Netanyahu—is the clearest indication yet that the “right wing” of the American Jewish lobby has decided to come out in support of Trump now that their most preferred candidate—Marco Rubio—has dropped out.

At the same time, the “left wing” of the Jewish lobby in America has continued with its vituperative campaign against Trump, accusing him of “hate speech” about Mexicans and Muslims.


As pointed out earlier, the difference between the “right wing” and “left wing” of the US Jewish lobby has nothing to do with loyalty to Israel, or the overall Jewish lobby’s control of the US political process and mass media, but merely on how best to present American subservience to the Jewish state in the most acceptable light.

Trump has already alienated the “left wing” of the Jewish lobby with his declared opposition to illegal immigration, which, as an article in the Jewish Daily Forward said, was “a threat to the vision of a bigger, more inclusive GOP, which many leading Republican Jews have advocated.”

The most recent example of “left wing” Jewish lobby hatred for Trump came in a press release issued on March 14, 2016, by Rabbi Rick Jacobs, President of the Union for Reform Judaism (UJR); Daryl Messinger, Chair of the UJR Board; Rabbi Denise L. Eger, President of the Central Conference of American Rabbis (CCAR); and CCAR Chief Executive Rabbi Steven A. Fox. 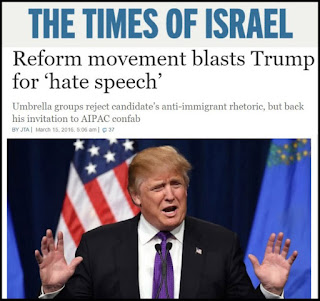 In their joint statement, published on the UJR website, these senior Jewish leaders condemned Trump for “naked appeals to bigotry, especially against Hispanics and Muslims.”

Accusing him of “being offensive” to “women, people of color, and other groups,” these leading Jews said that “at every turn, Mr. Trump has chosen to take the low road, sowing seeds of hatred and division in our body politic.”

Earlier, Trump had also seemed to have alienated the “right wing” Jewish lobby with his claim that he would be “neutral” on the Israel-Palestinian conflict. He has been subjected to endless attacks over this—most prominently in the Jewish Daily Forward where it was quite openly stated that even being neutral on the Israeli-Palestinian issue is a crime in Jewish eyes—and that only complete subservience and pro-Israel bias is acceptable.

In addition, Trump also upset the “right wing” Jewish lobby with his August 2015 announcement that he would not “rip up” the Iran “nuclear deal.” This nonsense deal was reached after the Jewish lobby created a deliberate set of lies over a completely mythical Iranian atom bomb program to try and get the US to attack Iran.

Trump’s clash with the “right wing” Jewish lobby reached its all-time low when he was booed while addressing the Republican Jewish Coalition in December 2015—after he had refused to say outright that he would recognize Jerusalem as the capital of Israel.

The issue of Jerusalem is however a topic on which Trump quickly moved his position, telling a Christian Broadcasting News (CBN) interview in January 2016 that he was “100 percent in favor of moving the US Embassy from Tel Aviv to Jerusalem”—effectively endorsing Jerusalem as the capital of Israel.

He went on to tell CBN that the “Iran deal” was “one of the worst deals I’ve ever seen under any circumstances, any deal, not just deals between nations. I think it’s a tremendous liability to Israel. I think it’s going to actually lead to nuclear proliferation and it’s going to cause a lot of problems.”

This condemnation of the “Iran deal” has set the stage for a reconciliation with the “right wing” Jewish lobby, and the ice has now been broken with the appearance of the article in Adelson’s Israel Hayom newspaper.

The interview with Trump was regarded as so important that it was even translated into English in that paper’s website—an honor usually only reserved for a tiny portion of that paper’s output.

Headlined “Trump to Israel Hayom: I’ve always been Israel’s friend,” the article goes on to say that Trump told the paper’s reporter, Boaz Bismuth, that his primary “success is tremendous news for Israel. Your friend is leading in the primaries. I’ve always been your friend, even at the toughest moments. And that’s not going to change. I love you.” 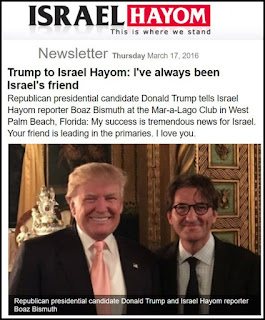 Realizing that other “right wing” Jews are still smarting about his Iran “nuclear deal” remarks, the Adelson-Israel Hayom article went on to pointedly ask Trump about it: “You mentioned Iran in your remarks and the bad nuclear deal,” I [the reporter] said.

“There are some things I don’t want to talk about; it would not be wise,” Trump said. “But if we’re talking about good news for Israel, then of course it is less good news for those who don’t like Israel.”

The Israel Hayom article also went on to add as a further sweetener that Trump had just cancelled his participation in the next Republican primary TV debate—because he was instead going to speak at the American Israel Public Affairs Committee (AIPAC) Jewish lobby conference.

Trump’s links with the “right wing” Jewish lobby have in fact been there all along, if suppressed until now. As the Times of Israel pointed out in August 2015, Trump has served as a grand marshal at New York’s annual Salute to Israel Parade, and in February 2015, he “was honored with an award at the annual gala for the Algemeiner, a right-wing Jewish news organization.”

Trump also famously endorsed—on video—Benjamin Netanyahu’s 2013 Likud party re-election campaign, telling Israelis that he is a “big fan of Israel” and that Netanyahu is a “terrific guy, terrific leader, great for Israel.”

Given the fact that Trump is personal friends with Netanyahu, it comes therefore as no surprise that the “left wing” Jewish lobby in America—which supports Israel’s Labor Party—has seen fit to attack Trump.


Ted Cruz—and John Kasich—are just as slavishly pro-Israel as Trump, as is Hilary Clinton. Therefore, while it is still unknown who will eventually be the next US president, one thing is guaranteed: no matter which candidate wins, the Jewish lobby—“left” and “right”—is assured that Israel will be the ultimate winner. 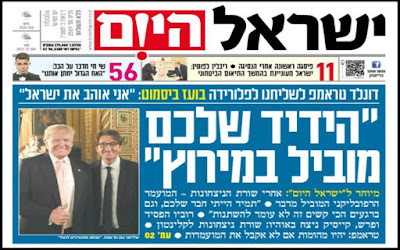