Swedish Police Warns Women Not To Go Out At Night

(News Articles from The GATES OF VIENNA and The DAILY MAIL UK in March 2016.)

Women in Östersund Had Better Stay Home at Night, Or Get Used to Being Raped. Whole Sweden is a crime scene and Östersund is a small town in the northern part of Sweden the Muslim Rape Capital of The World. Like most such towns, Östersund has always been a placid, orderly, law-abiding place — that’s the Swedish way.

Until recently. Everything has changed since the arrival of “refugees” at asylum centers that are popping up like mushrooms all over the Swedish landscape, even in the most rural areas. In the past few weeks six violent crimes — including rape and attempted rape — have been committed by men of “foreign appearance” against women out alone at night in Östersund.

Sleepy Swedish town rocked by EIGHT sex attacks in just three weeks, including on young children, by MUSLIM migrant men. Two 10-year-old girls were groped at a bus stop by a gang of Muslim migrants who threatened to rape them.


The following day, a woman was punched in the face, splitting her eyebrow, by a Muslim who threatened to kill her after he made a rude comment to her.  Just five days later a woman walking on her own was attacked by three men, beaten and pushed to the ground. They held her down, forced their fingers into her mouth while saying offensive, sexual words to her.

And in the latest incident just five days ago, a woman had to use martial arts to elbow her would-be rapist in the head and escape after three men surrounded her and punched to the ground and tried to pull her trousers down.

Now the police are advising women to stay at home at night, or at the very least not go out except in groups. The police chief would obviously prefer not to issue such advice, but he has been forced to acknowledge that his force is unable to protect the women of Östersund. There would have to be a policeman, or possibly several, to accompany each woman when she is away from home.

One of the “New Swedes” might say: “Ah, but there is an easy solution — the women should go out only if accompanied by their husbands, fathers, brothers, or sons!” In other words, the self-enforced practice of sharia law. Are Swedish women unhappy with this de-facto condition of purdah to which they are now being relegated? Yes, probably so.

Are they angry enough about it to vote out the multiculturalist politicians who forced it upon them without their consent? No, apparently not. Not yet, anyway. 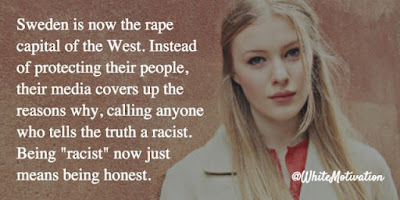 Video transcript of The Police Warning to Swedish Women: 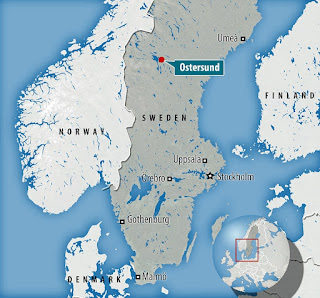 Women in Östersund, Sweden, warned not to go out alone after dark. Follows spike in assaults in city centre by 'men of foreign appearance'. Police added that attacks are unusual as 'no perpetrators were drunk'.

Women in a town in northern Sweden have been warned not to walk alone at night in the wake of a spike in violent assaults and attempted rapes. Police in Östersund made the unusual move to ask women not to go out unaccompanied after dark, after reports of eight brutal attacks, some by 'men of foreign appearance', in just over two weeks.

Speaking at a press conference on Monday, police said they 'have never seen anything like it in Östersund', a small town in the north of Sweden with a population of just 45,000. All incidents have taken place in Östersund since the 20th of February, and involved outdoor attacks where the perpetrators have been unknown to their female victims.

Sweden is preparing for the expulsion of up to 80,000 people whose asylum bids have been rejected, a cabinet member said 28 January 2016. A record 163,000 people applied for asylum in Sweden in 2015, straining resources and capacity at reception centres and local municipalities. The increase of explusions will be likely only at the beginning of 2017 though, due to the backlog the Swedish Migration Agency was struggeling with.

A police spokesperson added that in addition to the increased frequency, the attacks are also conspicuous as - despite being carried out late at night - none of the perpetrators were drunk. 'The cases of the sexual harassment and attempted rapes have involved groups of up to three people,' regional police chief Stephen Jerand told Sveriges Television. 'What stands out is also that none of these perpetrators have been under the influence,' he adds.

The most recent assault took place in the early hours of Sunday morning, when a woman was became the victim of an attempted rape by three young men in central Östersund. She was brought to the ground by three unknown men shortly after 1am, after which the men tried to rip her trousers off, but the woman fought back and managed to escape. The perpetrators have been described as 'tall, slim, aged 18-25 and speaking Swedish with a foreign accent'.

Just a few hours later, police received another report of a lone woman being attacked by a young man in the same neighbourhood in central Östersund. A police report states that an unknown man in his late 20s 'whose appearance was described as foreign' attacked the woman without provocation.  The man had reportedly walked up to her and punched her in the face with his fist, then thrown her to the ground, pushing her head into the asphalt, before running off. 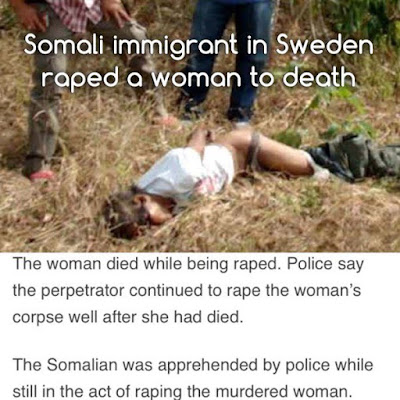 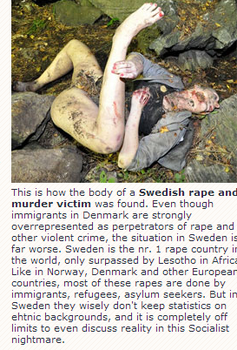 SWEDISH POLICE GIVE DETAILS OF THE BRUTAL ATTACKS

February 20: Two ten-year-old girls were groped by a group of adult men. Police say the men surrounded the girls at a bus station and started to touch them while threatening to rape them. Adults saw what was happening and intervened before the men escaped.

February 21: A women was walking alone at midnight in the town centre when a man passing by made sexual remark. The woman responded by calling him an ‘idiot’. He punched her, splitting her eyebrow and threatened to kill her. He was interrupted by passers-by and fled.

February 26: A women walking to work near the university was attacked by three men, beaten and pushed to the ground. They held her down and forced their fingers into her mouth while saying offensive, sexual words to her. Taleb Moafagh, 22, was arrested over the incident.

February 27: Police saw men surround a group of women and grope them outside a nightclub. When police tried to intervene, a drunken brawl broke out between men coming out of the club and the sex attackers fled.

March 2: Two women walking home from a bar were stopped by a group of men who told them: ‘Girls should not be out at this time of the night’ – before pushing them into a corner and groping them, then wandered off, laughing.

March 5: A woman walking by herself was threatened by a man in passing car, who screamed at her he would get his friends to ‘rape and murder’ her. When she ran off, he chased her but she managed to get to her apartment before he reached her.

March 6: A women walking home alone was whistled at by a man. When she told him to stop, he hit her in the head with his fist. She fell down and he punched her a second time, pushed her head into the snow and screamed at her he would rape and kill her before fleeing.

March 6: The same day another woman was walking home from a restaurant was attacked by three men. She was hit in the stomach by two of the men and shoved to the ground. A third man began undoing her trousers, but she managed to hit him in the head with her elbow. He started bleeding and fled. She later told police she was trained in martial arts – a skill police say saved her from being raped. Sweden, which has a population of nearly 10 million,  welcomed more than 163,000 migrants and refugees in 2015, more than any other European nation per capita. Police also highlighted an additional four cases in the past two weeks, including a lone woman assaulted by three men, and a report of a group of ten-year-old girls being harassed by men in central Ostersund.

The warning has been widely criticised, including by representatives of the local government, with many arguing that women should not have to 'adapt' to abusers. 'I am adverse to the solution being to tell women and children to sat at home, that can never be the solution for us,' local government commissioner AnnSofie Andersson told Sveriges Radio.

Sweden welcomed nearly 163,000 migrants and refugees in 2015, more than any other European nation per capita. The Scandinavian country, which has a population of nearly 10 million, imposed compulsory border-control ID checks in January to try to curb the influx.


Europe is facing it's biggest wave of immigration since the Second World War, with millions risking their lives to leave war and terror behind, or simply to seek a better life on another continent. The latest UN report shows that in the first two months of 2016, more than 130,000 refugees and migrants crossed the Mediterranean Sea - more than the total number for the first half of 2015. 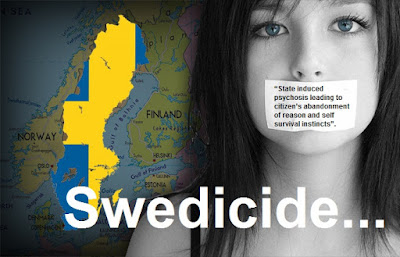 Related posts at following links:
Muslims Will Rape One in Every Four Swedish Women
Sweden Close To Collapse Due To Muslim Invasion
Sweden: Muslim Rape Capital Of The West
Posted by Hla Oo at 8:54 PM