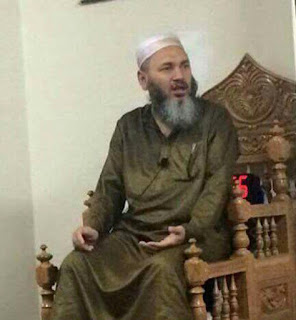 
"There's nothing in the preliminary investigation to indicate that they were targeted because of their faith," said Deputy Inspector Henry Sautner of the New York Police Department. Sautner said video surveillance showed the victims were approached from behind by a man in a dark polo shirt and shorts who shot them and then fled with the gun still in his hand.


The imam's daughter, Naima Akonjee, said her father and Uddin were close friends who always walked together to the mosque from their homes on the same street. Members of the Bangladeshi Muslim community served by the mosque said they want the shootings to be treated as a hate crime. More than 100 people attended a rally Saturday night and chanted "We want justice!"

The Council on American-Islamic Relations, an advocacy group, held a news conference near the shooting scene, where Kobir Chowdhury, a leader at another local mosque, said, "Read my lips: This is a hate crime" directed at Islam. "We are peace-loving." Apart from occasional complaints concerning our very loud calls-to-prayers our neighbours are mostly fine with us, he added. 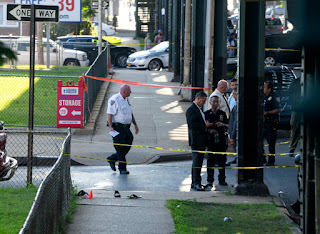 Naima Akonjee said her father didn't "have any problems with anyone." Sarah Sayeed, a member of Mayor Bill de Blasio's staff, serves as a liaison to Muslim communities. She attended the rally and said, "I understand the fear because I feel it myself. I understand the anger. But it's very important to mount a thorough investigation."

Members of the community had felt animosity lately, with people cursing while passing the mosque, said worshipper Shahin Chowdhury. He said he had advised people to be careful walking around, especially when in traditional clothing.

He called the imam a "wonderful person" with a voice that made his Koran readings especially compelling. Worshipper Millat Uddin said Akonjee had led the mosque for about two years and was a very pious man. "The community's heart is totally broken," said Uddin, who is not related to Thara Uddin.


Neighbors also described Uddin as a pious and thoughtful man who prayed five times a day and went to the mosque. While at home, they said he would water his garden and one next door. "A very honest, wise man ... (And) a very helpful guy," said neighbor Mohammed Uddin, who is not a relation of Thara Uddin's. 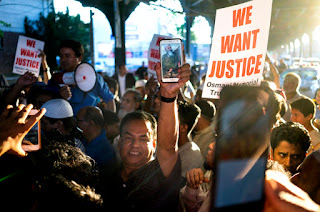 An Imam originally from Bangladesh and his associate were killed Saturday in Queens, NY, shortly after leaving the mosque where they were saying their afternoon prayers.

The victims were identified by the NYPD as Imam Maulama Akonjee, 55 and Thara Uddin, 65. Both men were shot at close range in the head, just a block away from the mosque shortly before 2pm. The Imam was pronounced dead at the scene, while Uddin died four hours later at Jamaica Hospital.

The shooter, according to Deputy Inspector Henry Sautner from the 106th precinct, remains at large. According to Sautner, the shooter is a “male with medium complexion dressed in a dark polo shirt and shorts.” The authorities added that the motive has not been determined, but community members, predominantly Muslims, are calling the crime a hate crime.  Most blame the shooting on GOP presidential candidate Donald Trump and former NYC Mayor Rudy Giuliani.

“That’s not what America is about,” Khairul Islam, 33, a local resident told the Daily News. “We blame Donald Trump for this. Trump and his drama has created Islamophobia.”

Another Imam, whose name is unknown at the moment, also blamed the real estate mogul and former NYC mayor for the shooting. “For those in leadership like Trump and Mr. Giuliani, and other members of other institutions that project Islam and Muslims as the enemy, this is the end result of their wickedness,” the Imam said at a gathering of Muslims protesting the shooting.

Other Muslim gatherings were chanting “This is Donald Trump’s fault,” and “Muslim hate crime.”

Witnesses providing leads to the NYPD described the shooter as a tall man of Hispanic descent. The NYPD is currently conducting an extensive canvass of the area for video and seeking additional witnesses as the shooter remains at large. 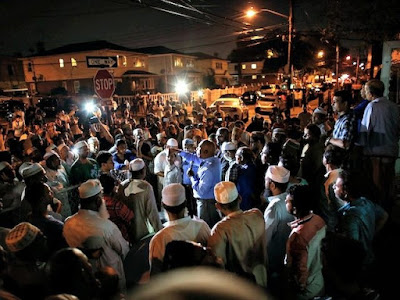 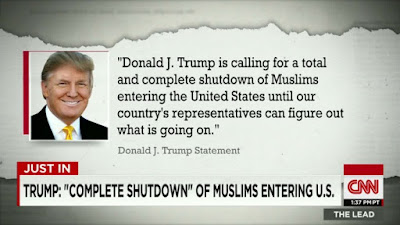 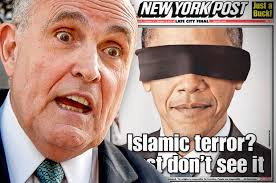