However, CNN Indonesia reported that a number of towns had already suspended the vaccine before the MUI even announced their decision. Tim Lindsey, the director of the Centre for Indonesian Law in the University of Melbourne, told the ABC the fatwa would undoubtedly make accessing the vaccination more difficult in Indonesia.

Fatwas are not legally binding in Indonesia, however declarations from the MUI are highly influential. "If there's a MUI fatwa opposing it, that will be a real obstacle to public health efforts," Professor Lindsey said.

What is the MUI and how is Widodo tied to it?

The MUI is a small non-government organisation which receives funding from the government of Indonesia. It oversees all Muslim organisations in the country, and has powers to issue halal certifications and regulate Islamic banking. Imam Amin, President Jokowo Widodo's controversial new running mate, is the leader of the organisation and was previously the head of its fatwa committee.

One fatwa issued by Mr Amin was crucial in the trial of Jakarta's former minority Christian-Chinese governor Basuki Tjahaja Purnama, commonly known as Ahok, who was subsequently jailed under blasphemy charges.

Basuki Tjahaja Purnama, also known as Ahok, was accused of attacking the Koran. The fatwa sparked a mass movement which saw more than 150,000 Indonesians protests in the streets of Jakarta calling for Ahok's arrest.

"There's a pattern that's emerged in Indonesia. In minority groups and cases of blasphemy, fatwas are relied on in court as evidence," Professor Lindsey said. "It's almost always the case that if a MUI fatwa is issued against a person accused of blasphemy, they are convicted."

Professor Lindsey said the MUI has high levels of government support, which legitimises them in the eyes of the public. "The Indonesian democratic system is under threat from this conservative Islamist position and MUI is one of the organisations that's leading that charge."

Why has  JokoWi picked Thehard-line cleric as his running mate?

Significant progress has been made in relation to Indonesia's democratisation over the past 20 years, but a culture of impunity around human rights abuses persists, writes Olivia Nicole Tasevski.

Dave McRae, senior lecturer at the Asia Institute at Melbourne University, said it appeared Jokowi's decision was the result of pressure from within his coalition."Ma'ruf Amin was not his choice, but the Islamic credentials seems to have been such an important factor of his coalition's decision," he said.

"From early on Jokowi showed a willingness to compromise good government in pursuit of economic and social policy goals that he saw as more important to getting himself re-elected. "The fruits of these decisions have been that he's now in a very strong position to run for a second term."

The last-minute reversal has reignited old questions about Jokowi's bargaining power when dealing with party elites within his coalition. "In delaying his VP declaration, Jokowi had hoped to prevent defections from his coalition," said Thomas Power, a PhD candidate at the Australian National University.

Last week, there was concern that the National Awakening Party (PKB) — the most influential religious party within Jokowi's coalition — could withdraw their support. "The ramifications this may have for his standing with traditionalist Muslim voters shows his deep insecurity around issues of Islamic identity has not abated," he said.

'Jokowi not Islamic enough': Who is Ma'ruf Amin?

Indonesian vice-presidential candidate Ma'ruf Amin waves to journalists during formal registration as candidate. Jokowi's decision to choose Mr Amin, whose religious organisation has issued several controversial 'fatwas' — or Islamic decrees — has come as a surprise to many. Mr Amin is considered one of the most powerful Muslim clerics in the country.

He is the chairman of Indonesia's peak Islamic clerical body, the Indonesian Muslim Ulama Council (MUI), which oversees all registered Muslim organisations, and Mr Amin has supported controversial regulations which have been criticised by Human Rights Watch.

These include laws against pornography, as well as fatwas curtailing the activities of minority groups and calling for the criminalisation of LGBT relationships. "We want a stern prohibition of LGBT activities and other deviant sexual activities, and legislation that categorises them as a crime," he told a press conference in the MUI office in 2016.

According to Jokowi's coalition, the nomination choice will shut down allegations that the incumbent President is "not Islamic enough." It would also allow them to better challenge Mr Prabowo, who they say has strong ties to Islamic clerics. "Now by having Ma'ruf Amin on our side, they no longer can use the issue to corner Jokowi," said Asrul Sani, the secretary general of one of Jokowi's coalition partners. 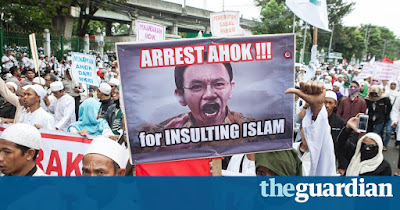 Dr McRae said the selection of Ma'ruf Amin indicated the Jokowi camp was still concerned about the potential of an Ahok-style attack on his Islamic credentials. Jokowi and Basuki Thahaja Purnama, commonly known as Ahok, were the governor and vice-governor respectively for Jakarta prior to Jokowi's rise to the presidency.

In 2014, Ahok succeeded Jokowi as governor becoming the first minority Chinese-Christian to hold that office, but less than three years later, he was found guilty of committing blasphemy against Islam.

The trial was criticised for undermining Indonesia's reputation of practicing a moderate form of the religion. "It's something we saw in the regional elections as well … [Islamic] identity politics are a few of the grounds in which the opposition would really strongly attack Jokowi," he said.

Who is General Prabowo?

The 66-year-old former lieutenant general has been connected to alleged human rights abuses during bloody military operations in Timor-Leste and Papua, as well as in Jakarta in 1998. That opposition is now being led by the controversial former special forces commander Prabowo Subianto, who lost to Jokowi in the 2014 presidential elections.

His Gerindra party defeated Ahok in the 2017 Jakarta elections in a divisive campaign that appealed to conservative Islamic voters. "In that light it's not surprising that Jokowi's chosen someone who can protect him or insulate him from those grounds," Dr McRae said.

Jokowi has struggled to pass policies which could give conservative Muslims a reason to turn against him — for example, he has been under pressure to apply a presidential decree to ban child marriages in Sulawesi, but despite agreeing to do so, has not followed through.

Ma'ruf Amin was integral in the blasphemy trial of former Jakarta governor Ahok, which caused deep division within Indonesia's pluralist society. Jemma Purdey, a fellow at the Australia-Indonesia Centre at Monash University, said the decision would alarm many of Jokowi's constituents, who include religious and ethnic minority groups and progressives.

"Some of these voters who have previously never considered ever voting for Prabowo, they may be considering a shift," she said. Diana Pratiwi, an Indonesian permanent resident in Melbourne and avid Jokowi supporter, said many of his supporters were disappointed by the decision.

"There are many Jokowi supporters in Melbourne who were discouraged after the announcement, because of our support for Ahok," she said. Voting is not compulsory in Indonesia, and Ms Pratiwi said social media had been rife with talk of abstaining from voting.

Indonesians have taken to Twitter to express their disappointment with the hashtag #Golput — an abbreviation of Golongan Putih, literally meaning White Group, or to be in a group of those who will not vote.

Speaking in parliament last week, Jokowi addressed concerns about the country's human rights track records. He said he was still committed to ensuring that the atrocities in Indonesia's chequered past are not repeated.

"We need to pay specific attention to defend, protect, fulfil, and establish human rights," he said. However, he did not directly address the controversial views that his running mate has previously expressed on humans rights issues.

So who is the favourite to win?

So now, Jokowi and Ma'ruf have entered the presidential race with a sizable lead in the polls, along with the advantages of incumbency and wealthy coalition members. However observers say Mr Prabowo has shown strong leadership skills by selecting a running mate from within his own party.

"Unlike Jokowi, Prabowo ultimately stood firm against the demands of his coalition partners and would-be allies," said Mr Power from ANU. The test will be whether he can climb his way up in the next eight months and close the significant gap between himself and Jokowi.

"Whereas in the last presidential elections Prabowo commanded the far larger, wealthier coalition, and the sponsorship of numerous government incumbents — those advantages now belong to Jokowi."

"It will take an impressive effort if Prabowo-Sandi are even to run their rivals close. However, in the nomination game at least, Prabowo has outplayed the president," Mr Power said.

Regardless of the outcome of the election, observers say the focus on conservative Islam in the campaign might affect public perceptions of Indonesia overseas. "Much of the negative attitudes you see in Australia towards Indonesia are driven by an overestimation of the effects of conservative Islam in Indonesian Government policies and in public life in general," Dr McRae said.

"I think the risk of Ma'ruf Amin pushing that sort of agenda, making openly intolerant statements — apart from the damage it causes in Indonesia — is that it feeds into that narrative in Australia." Indonesia is set to hold general elections next year on April 17, 2019.