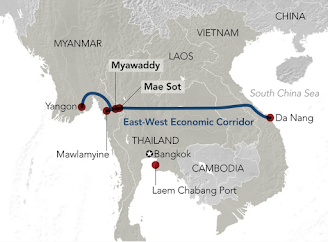 If the railways are built it will transform cargo and passenger transport in the Greater Mekong Subregion. Here is the status of the railways of the four countries that the railway passes through.

Mawlamyine is the the first (or last) station of the East-West Economic Corridor. The route from Mawlamyine to Myawaddy on the Thai border is about 120 km. Moulmein (as Mawlamyine was then known) was the first capital of British Burma between 1826 and 1852.

It was an important river port in colonial times, with timber being the major export. There were sea connections to Penang, Singapore, Calcutta, Bombay, and London. The current port at Mawlamyine is not suitable for large container ships, so there is a proposed new deep-sea port at Kalagauk Island, about 130 km south of Mawlamyine.

For businesses in Thailand shipping cargo to the west, they could send containers here instead of Bangkok, saving the journey around the Malay Peninsula. Mawlamyine as a port has competition from the proposed Dawei port and Special Economic Zone, which is closer to Bangkok.

There are currently no railways connecting Myanmar to Thailand, which is one of the many missing links of Southeast Asia railways. With the new railway connecting to the existing railway at Mawlamyine, passengers could then travel from Bangkok to Yangon by train

The Thailand section forms the bulk of the line, traversing an 800km-long route from Maesot to Mukdahan. Even if Myanmar and Laos don’t build their section for years, this line would still be of great benefit to Thailand if they went ahead with it. There is no east-west rail in North, Central, and Eastern (Isan) Thailand. A railway across Thailand would go a long way towards decentralising Bangkok-centric Thailand.

The railway would cross paths with the northern line at Phitsanulok, and the Northeastern Line at Khon Kaen. The new line could turn these cities into regional hubs. Both cities are already planning city transit systems, with a light rail under construction in Khon Kaen, and a tramway planned for Phitsanulok.

There have been numerous announcements over the years about the plans to start this project. There has been interest from the Korea Rail Network Authority, and Japan has proposed a high-speed railway on the line. Since the initial plan was released, Thailand has proposed that the route be diverted south of Phitansulok to Nakhon Sawan instead.

As the country with no railway (apart from a line that extends over the border from Thailand), you might think that Laos would be the last of the four countries to fulfil their commitment to a Pan-ASEAN railway. Instead, Laos almost become the first.

In Laos the 220 km railway would run from Savannakhet on the Mekong River to Lao Bao on the Vietnam border. In November 2012 Giant Consolidated from Malaysia was awarded the contract to construct and operate the Savannakhet-Lao Bao Railway.

A ground-breaking ceremony was held in December 2013, and the right-of-way railway corridor posts was completed in December, 2016. Since then there hasn’t been any update on the status of this project.

There is another plan that would extend a railway from Vientiane to Pakse in the south of Laos. That would then make Savannakhet a junction station. So maybe it will get a skyline like the one portrayed in the video.

The video also shows a “Laos Railways” company. If there were 11 stations then there would be a domestic railway service stopping all stations, and international high-speed trains from Thailand or Vietnam passing through.

The Vietnam section from the Lao Bao border to Dong Ha in Quang Tri province is about 80km, making it the shortest section of the four countries. This route is mountainous though, so it would be a challenging build. Vietnam also hasn’t built a new railway for over 40 years, so this may not be a high priority compared to other work that needs to be done.

When the EWEC was first announced it included Da Nang as it was the closest sea port to the corridor. Since then Quang Tri province has established an economic zone near Dong Ha, which will include a port to serve the EWEC.

In addition to building a new railway, the North-South line still needs to be modernised. The plan has been to turn the Hanoi-Ho Chi Minh City route into a high-speed railway. The current line is a 1-metre gauge single track railway, so it would not be able to take trains from a standard-gauge east-west railway.

If the railways are built then the ports at Dong Ha and Da Nang would be the big winners, receiving freight from Laos and Thailand. It would also mean you could travel from Da Nang to Yangon by train. That would make it the world’s second Indian-Pacific railway (after the Australian railway). The Bay of Bengal is the northeastern part of the Indian Ocean, and the South China Sea (East Sea in Vietnam) is a marginal sea that is part of the Pacific Ocean.

(James Clark is the editor of livinginasia.co and is currently based in Ho Chi Minh City. Follow his travels at www.nomadicnotes.com and on Twitter at @nomadicnotes)

Myanmar MPs Approve ADB Loan for Mekong Corridor Highway: Myanmar’s Union Parliament on Wednesday approved a US$483.8 million (660 billion kyats) loan from the Asian Development Bank (ABD) for an expressway that is a part of the international East West Economic Corridor (EWEC).

The project hopes to link Vietnam’s port of Da Nang and Thilawa port in Yangon, passing through Laos, Cambodia and Thailand. The approved 62 km Bago-Kyaik Hto Expressway Project will connect Bago Region and Mon State, with the Ministry of Construction taking responsibility.

In Myanmar, the EWEC is due to link to the planned expressway, the Bago-Thanlyin road to the Thilawa Special Economic Zone, Yangon’s outer ring road, Hanthawaddy International airport and the Yangon-Mandalay highway. Military appointees and lawmakers from other parties objected to the ABD loan.

The ministry proposed the project on July 17 and the Parliament debated the loans on Monday. Daw Yin Min Hlaing of the National League for Democracy representing Gangaw Township in Magwe Region urged the ministry to review the budget as the cost was too high, costing nearly 22 billion kyats ($16 million) per mile (1.6 km).

Dr. Kyaw Lin, the deputy construction minister, told Parliament the expressway would form part of the Greater Mekong Subregion (GMS). It will help “not only the economic development of Myanmar, but also the connectivity and trade between Vietnam, Laos, Cambodia and Myanmar, which are part of the GMS.”

The deputy minister said the new four-lane road will save time when traveling from Bago to Kyaikto in Mon State through Thanatpin and Waw townships. The project is due to start next year and be completed by 2027. It is expected to take about 55 minutes to travel once construction is completed, while the existing road currently takes about two hours.

The road is due to be an access-controlled expressway with four interchanges, noise barriers and high walls, 315 small bridges and underpasses. It is also due to include a 2 km bridge over the Sittaung River. The bridge is due to be built with a 27.8 billion yen ($264 million) loans from the Japan International Cooperation Agency (JICA), which was also approved by Parliament on Wednesday.

According to a JICA study, 3,000 to11,000 vehicles are using the current road each day, with traffic expected to continue to increase until 2025. As part of the EWEC project, the government upgraded the Myawaddy-Kawkareik and the Eindu-Kawkareik sections with ADB loans. The Bago-Thanlyin section, connecting Thilawa Special Economic Zone, is due to be constructed with another ADB loan.

U Maung Maung Win, the deputy minister of planning, finance and industry, told Parliament that the expressway will boost the domestic and Mekong regional economy but also stimulate trade and safety for road users. The Bago-Kyaikto expressway is part of the COVID-19 Economic Relief Plan to boost the economy by using construction projects to create employment, said U Kyaw Lin. The Construction Ministry looked to receive $2 billion (2.7 trillion kyat) in foreign loans but has so far only received $344 million (469 billion kyats) to use and has not started repaying those loans. 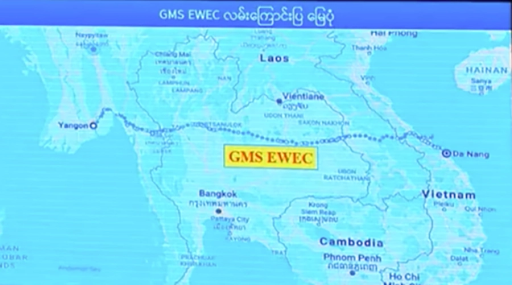