The easy flow of illicit Chinese weapons into Myanmar poses threats to regional security and stability, according to The European Foundation for South Asian Studies - EFSAS). Reports on the independent Myanmar-centric news website The Irrawaddy recently brought to light the seizure on 23 June of a large consignment of Chinese-made weapons in Mae Sot district on the Thai side of the Myanmar-Thailand border.

While preliminary investigations have suggested that the weapons may have been destined for insurgent groups in Myanmar, the development has nonetheless raised antennae within security circles in New Delhi. It has also reignited the serious questions that had existed for long about the scope and depth of China’s support to terrorist groups in the region in pursuit of its policy of what a Thailand-based organization termed “diplo-terrorism”.

A joint task force of the Thai military and police carried out a raid on a house in Mae Tao in Mae Sot district, which in recent years has emerged as a hotbed of insurgents of all ideological persuasions and a preferred staging area for the transportation of arms and ammunition, and uncovered a large cache of Chinese-made weapons.

It comprised AK47 assault rifles, machine guns, anti-tank mines, grenades and ammunition, the total value of which was reported by The Irrawaddy to be close to $1 million. Two Thai nationals were arrested from the house, and another six people, all Myanmar nationals with four being ethnic Karen and two ethnic Rakhine, from the Mae La refugee camp located about 65 kilometers from Mae Sot.

The Irrawaddy quoted a source from an ethnic armed organization based on the border as saying about the consignment: “They are not the weapons currently used by the AA (Arakan Army). The weapons manufactured by the Wa (United Wa State Army) and the KIA (Kachin Independence Army) are not up to much. They can’t fire on automatic.

The seized weapons are original and Chinese-made”. Shedding light on the eventual destination of the consignment, the source added, “Usually weapons are smuggled to Indian rebels based on the border with Myanmar and the AA as they pay good prices”. 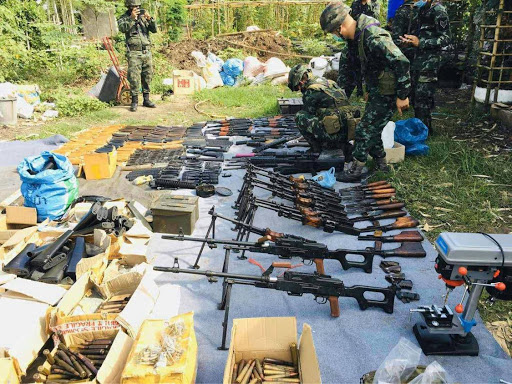 Indian insurgents from the country’s north eastern states who have been sheltering for years in Myanmar, as well as the AA that has its roots in the Rakhine state of Myanmar, both present security challenges for India. In addition to being threats to national security, they are also irritants that impact India’s Act East Policy.

As has been contended in the EFSAS Study Paper titled ‘From Look East to Act East: India’s Changing Posture in the Indo-Pacific and the Containment of China’, the Act East Policy represents “an ambitious reformulation of India’s security policy abroad”, which, “if successful, can enhance India’s economic and political role in the regional security architecture”.

The Indian suspicion, not without basis, is that impeding the progress of India’s Act East projects has assumed weight in China’s strategic thinking. The influx of Chinese weapons is, accordingly, in tune with such thinking.

Reflecting the seriousness with which the Indian government has viewed the development, India’s Ambassador to Thailand Suchitra Durai on 20 July held a meeting with Unsit Sampuntharat, the governor of the Tak province of Thailand in which Mae Sot is located. The Thai delegation at the meeting included the police chief and immigration officials. Indian security agencies have also reached out to their counterparts in Myanmar and Thailand to ascertain more details about the consignment.

Some prominent insurgent organizations of India’s north eastern states, especially those from Assam, Manipur, Nagaland and Mizoram, have been chronicled to have historically benefitted from Chinese largesse and weapons. Several of these organizations are presently pursuing peace processes with the Indian government.

Others, including breakaway factions such as the United Liberation Front of Asom (Independent) whose leader Paresh Baruah is known to shelter in Ruili in the Yunnan province of China where he reportedly maintains regular contact with Chinese intelligence agencies, remain active. There are apprehensions amongst Indian security experts that the confiscation of a large quantity of illegal Chinese weapons in Mae Tao could represent the start of yet another attempt to rekindle the fagging insurgency in India’s north east.

The AA, meanwhile, as brought out in the EFSAS Commentary of 29-05-2020, has emerged as a massive thorn in the flesh of the Myanmar government. However, it is not the Myanmar government alone that is worried about the AA. As underlined in the aforementioned commentary, the AA has also targeted Indian interests in Myanmar, especially the Kaladan project that is a key component of India’s Look East Policy.

The project has, consequently, slowed down and is now giving the impression of running through treacle. The AA is further reported to have developed links with north east Indian insurgent groups. As a result, even if the weapons in question were primarily meant for the AA, they would have ramifications for India’s security as well.

The seized cache in Mae Sot was not the only consignment of Chinese weapons that made its way into the region in recent months. Former BBC correspondent for the region Subir Bhaumick in an article on 22 April had revealed that in the third week of February a large batch of 500 assault rifles, 30 Universal Machine Guns, 70,000 rounds of ammunition, a huge stock of grenades, and significantly, a few F-6 Chinese Manpads that are capable of shooting down helicopters, drones and combat aircraft, had been brought in by sea and offloaded at Monakhali beach near the coastal junction of Myanmar and Bangladesh. 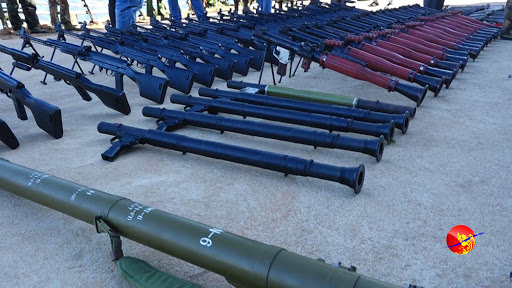 Saying that the weapons were meant for the AA, Bhaumick added that “definite evidence has surfaced that the consignment had a trouble-free landing at the Monakhali beach near Whaikyang (Wyakuang in Burmese) on February 21 night”, and that it had “reached the Arakan Army camp at Sandak(Mro) near Thanchi on March.

After carrying the huge consignment to Sandak(Mro), the AA has smuggled the arms into Rakhine using the Parva corridor in South Mizoram here the local Khumi villagers are friendly to the insurgents”. The same route had earlier been used to transport Chinese weapons meant for Indian insurgent groups such as the National Socialist Council of Nagaland (Issac-Muivah).

Bhaumick pointed out that the AA was known to have strong links with China ever since its formation in the Kachin state of Myanmar in 2009. A spokesman of AA, Khaine Tukkha, recently alluded to these linkage when he said, “China recognizes us while India does not”.

Regarding the origin of the consignment, Bhaumick quoted a top Bangkok-based expert on Asia’s arms trafficking as having told him that the China North Industries Corporation (NORINCO), a Chinese State-owned ordnance company, had been supplying munitions to non-State actors like the AA and the north east Indian insurgent outfits through fronts such as the Chinese firm TCL.

The expert added that in early February, even as the COVID-19 pandemic was raging in China, TCL had loaded the weapons consignment onto a ship at Heibei, a small fishing port in south China. A TCL manager named Lin alias Yuthna was a key player in the process. Bhaumick, however, conceded that it was not clear “whether the AA had paid TCL or whether the Chinese intelligence would have organized covert payment”.

Anders Corr, a former civilian worker for the United States (US) military intelligence, in a study titled ‘China’s diplo-terrorism in Myanmar’ that appeared in the Bangkok-based LiCAS.news, asserted that China was supplying funds and sophisticated weaponry to the AA, a terrorist organization, in a bid to expand its diplomatic influence in Myanmar.

Corr called out Chinese President Xi Jinping’s statement of January this year, when Jinping reportedly said that “We categorically deny allegations of supplying arms to ethnic armed organizations in Myanmar”, by drawing attention to the consignment that was dispatched to the AA just a month later in February.

Corr also reminded that after an AA attack on four Myanmar police stations in 2019 in which 20 police personnel were killed, China’s Foreign Ministry spokesman Lu Kang had refused to denounce the AA and had said rather blandly that “China supports all parties in Myanmar to promote reconciliation and peace talks, and strongly opposes any form of violent attacks”.

Relying on military and diplomatic sources, Corr averred that approximately 95 percent of the AA’s funding came from China, and that Chinese support included not just finances, but also uniforms, weapons, ammunition and other war like stores such as shoulder fired FN-6 surface-to-air missiles. He also drew attention to the fact that China had simultaneously been selling arms to the Myanmar military, and since 2013 the latter had imported $720 million worth of weaponry from China.

The Myanmar military was using harsh and high-handed methods to subdue the AA and other ethnic militant groups, including air power, artillery shelling, burning down huts, destroying food reserves and denying medical services and internet access to entire villages. Corr underlined that such indiscriminate Chinese actions meant that China had made itself complicit at both ends, whether it be through the AA adopting terrorist means in pursuit of its goals within Myanmar, or the Myanmar military clamping down on ethnic groups in total disregard of their human rights. 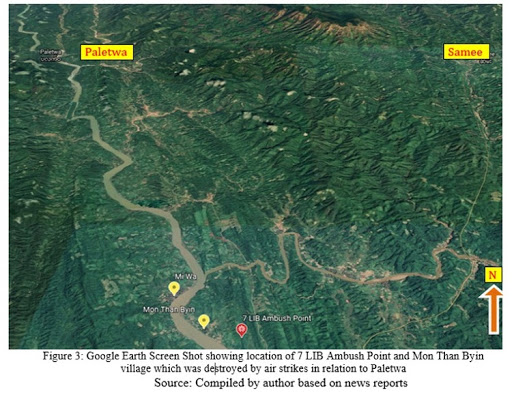 Corr opined that “An object lesson in diplo-terrorism is the leverage over Myanmar and India that China gained by arming the Arakan Army, operating in the corridor from northeast India over Myanmar’s Chin and Rakhine states to the Indian Ocean. The evidence of China using violence by ethnic militias in Myanmar against its competitors demonstrates the violent side of its Belt & Road development project, which not only ensnares recipients in debt traps, but seeks to bar competitors through violent means deployed by criminal sub-State actors.

Sadly, China’s conception of its role in the world seems to be guided by exactly the zero-sum conflict over territory and influence that it accuses others of fomenting. It does not limit itself to soft power. Rather, Beijing associates with the lowest-level forms of terrorist and gangland violence in order to attain its diplomatic objectives”.

Guwahati-based senior journalist and author Rajeev Bhattacharyya pointed out in an article on 1 July that “Unlike Pakistan’s brazen support to rebel groups from Jammu & Kashmir, China’s assistance to the separatist outfits in the Northeast has been covert and selective, and has gone through many phases over the past five decades.

Bhattacharyya added, “Sometime in the mid-1990s, the State-owned China North Industries Corporation (NORINCO) embarked upon modernization, and the disposal of obsolete weapons. In 2013, the Stockholm International Peace Research Institute (SIPRI) published a paper titled ‘China’s Exports of Small Arms and Light Weapons’ detailing the reasons that fuelled the proliferation of Chinese small arms in the world”.

Strategic analyst Wasbir Hussain had earlier written in 2015 that “China, in fact, holds the key to the availability of weapons and ammunition among the terror groups in northeast India that is actually keeping insurgency alive in this far-eastern frontier”. Even before that, in 2002, US Senator Larry Pressler had told Indian media representatives in Kolkata during a visit that China was the world’s major source of small arms proliferation that was “fuelling conflicts from Morocco to Malaysia”.

While the unsavoury character of the Chinese State and its many acts of violation of the international order are increasingly making the news in the context of China’s contribution to the COVID-19 outbreak and its aggressive posturing all over the world, it is high time that State sponsorship of terrorism by China is acknowledged, exposed and accorded the serious corrective attention that it eminently deserves. 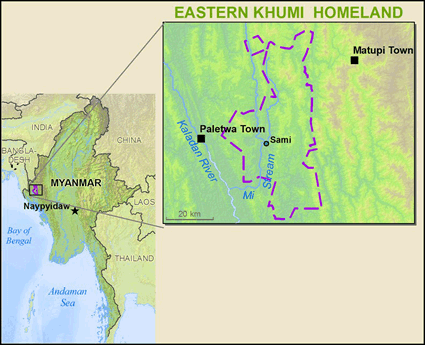