(Bertil Lintner’s article from the ASIA TIMES on 12 February 2021.)

CHIANG MAI – It is becoming abundantly clear that Myanmar’s military leader Senior General Min Aung Hlaing didn’t anticipate the youthful fury his democracy-suspending coup would spark. But the Generation Z-led street demonstrations now spreading across the nation have exposed just how out of modern touch the again-ruling generals are.

Min Aung Hlaing looked tense and anything but confident when he made his first TV address to the public on February 8 at the same time as huge demonstrations swept the country. These are vastly different from those in 1988, when soldiers managed to suppress a pro-democracy uprising by spraying automatic rifle fire into crowds of unarmed demonstrators. They are also different from 2007 Buddhist monk-led Saffron Revolution, where soldiers again used bloody suppression to put down a similar popular movement.

Generation Z members are often described as “digital natives” known for their social media and internet-savvy. They can not only get around government blocks on news, but can also organize mass movements with the help of pro-democracy activists in Hong Kong and Thailand, with whom they communicate daily.

On Monday, it will mark two weeks since the military ousted the country’s democratically elected government, and because of savvy activists of whom many are young women, public protests against the coup have not subsided despite military threats and bans.

On the contrary, they are getting stronger with people in more than 200 of Myanmar’s 330 townships rejecting what they see as the military’s unsubstantiated and concocted claims of fraud in the November 2020 election, which the National League for Democracy (NLD) won by a landslide. That gave it the right to form a second government that would have been in office for another five years.

For these young people, it is not only about the NLD and its leader, now-detained State Counselor Aung San Suu Kyi, but also about how the coup and will deprive them of the freedom of expression that they have enjoyed since the country opened up to the outside world in 2012.

Now, the military wants to introduce a new, draconian cyber-security law that would re-introduce censorship and force social media platforms to share private information about their users when requested by authorities. 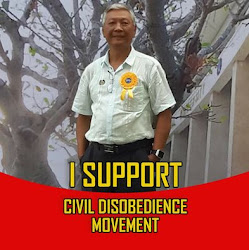 Using sets of different SIM cards and VPNs, Generation Z and other activists have so far managed to get around the military’s feeble attempts at closing down some social networks and limiting access to others. Those still accessible channels have exposed and disseminated police brutality. Police officers who have opened fire on demonstrators have been named and shamed with photos showing their actions.

Arrests of activists, even at night, have been recorded and posted on social media. When a crowd of hired thugs armed with iron rods climbed out of a truck to confront the protesters, they were filmed through the windscreen of a car.

Footage of protesting people with loudspeakers and placards in wooden boats plying Inlay Lake in Shan state went viral on social media, as did an anti-coup caravan of motorcycles in the northern town of Namkham on the Chinese border. Video clips of policemen joining the demonstrations in Loikaw, Kayah State, and Magwe also went viral.

The Generation Z demonstrators have been imaginative, to say the least. Exactly five people sat down in rings a few meters apart on the streets of one town when the military junta imposed a ban on gatherings of more than five people. Such rings of protesters filled the town’s streets.

Young demonstrators have dressed up as ghosts and carried placards saying “the military is scarier than us”, or donned all sorts of colorful costumes like contestants in a beauty pageant to mock the generals in power.

Mediums asked deities in heaven for help to get rid of Min Aung Hlaing and the other coup maker generals — and then cast evil spells on them. More worldly, employees at hospitals and clinics have gone on strike but have been careful not to let the public suffer. They have taken shelter in Buddhist monasteries, where they treat their patients. 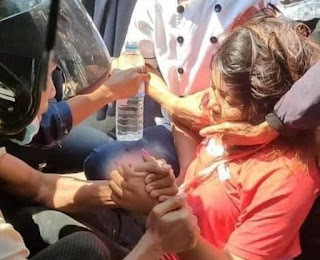 Workers at factories and mines have also joined what has become known by its short-form “CDM”, or civil disobedience movement. That is not to say that some of the demonstrations have been all fun and games. The police shot a 19-year-old girl in the head in Naypyitaw on February 9 and, at the time of writing, she is fighting for her life in a nearby hospital.

Video footage disseminated on social media has also shown angry protesters pelting rocks at police cars and pushing back police lines and water-cannon trucks in Mandalay. The presence of those trucks has given Generation Z — and others — a physical, if not geopolitical, target for their protests.

The security force vehicles, complete with surveillance cameras and multiple spray nozzles, have been supplied by China and are of the same kind as those used against pro-democracy demonstrators in Hong Kong. Since they appeared in the streets, demonstrations have been held outside the Chinese embassy in the old capital of Yangon, where nearly all diplomatic missions are still located.

Many fear a more violent response than water cannons and rubber bullets is imminent. On February 12, Min Aung Hlaing announced the release of more than 20,000 prisoners convicted of crimes before January 31, 2021, from prisons and jails across the country.

It is unclear whether the military intends to deploy them to attack and suppress the protests and create chaos, but that is exactly what happened during the 1988 uprising. What is clear is that authorities are targeting perceived protest leaders.

Arrests appear to have targeted not only elected NLD MPs and politicians such as Suu Kyi and deposed president Win Myint and members of the country’s election commission, but also those who the military seems to believe are teaching the youngsters how to use the internet safely.

Among the best known the military tried to arrest is Zaw Thurein Tun, chairman of the Sagaing Region Computer Professionals Association and a well-known activist. He reportedly managed to escape arresting authorities with the help of his family and neighbors. At least 200 remain in custody, according to the Assistance Association for Political Prisoners, a nongovernmental organization.

Until now, only the police have been sent in by the new junta to suppress the protests. But if that fails, lethal military force cannot be ruled out. But if such a disaster happens, it will not be the same as in 1988 and 2007.

In 1988, only a few photographers witnessed the carnage and rolls of film had to be smuggled out to Thailand to be published. The internet existed in Myanmar in 2007 and some material was sent out to the outside world, but it was limited due to a media blackout.

This time, however, any military bloodbath and shooting into pro-democracy crowds will be meticulously documented and quickly disseminated all over the world. Min Aung Hlaing and the generals have met their match, if not their superiors, in Myanmar’s galvanized Generation Z. 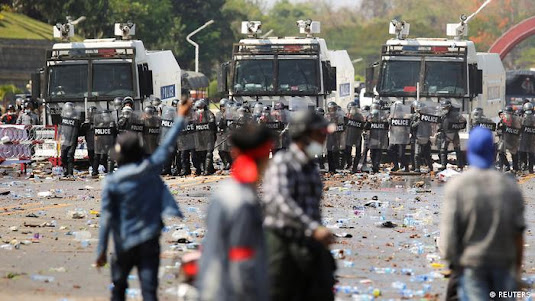