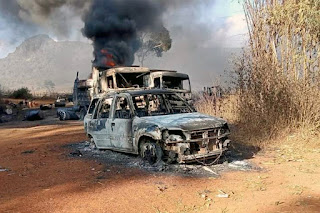 Next day the KDNF (Kareni National Defense Force) released on their Facebook pages the massacre report and the photos of burnt-out remains of vehicles and bodies. Ten days later on January-3 the Kareni State Police reported the massacre on their online press conference. The police declared 31 burnt-bodies were recovered and autopsies were done on them. Altogether 26 men and 5 women were shot dead and their bodies burned to crisp. 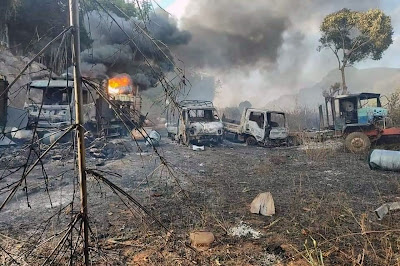 Peter’s Last Moments Before His Demise

Peter (34) was one of the identified victims and according to his wife Julia (27) he left their Loikaw home in a rental white CRV at about 6:30 am on Christmas Eve. He was to bring his ailing father back to Loikaw to see a doctor. He never come back home.

Julia kept on calling and on December-26 the phone was turned-on again and ringing but someone at other end did not answer. When Peter’s sister sent a text later that day the reply acknowledged that Peter’s mobile phone was found in the burnt site. Further attempts to communicate were not answered after that text reply.

Then they saw the burnt-out remains of Pter’s white CRV in the photos released by the Karenni Police and the KNDF. The confirmation that Peter was killed and his body burnt to crisp.

After seeing Koo-Li-Rae’s burnt-out motorbike in the KNDF’s photos her family tried to call his mobile so many times without any success. Finally on December-26 one Burmese-sounding man answered and told them that the phone was now in Rangoon at 700 miles away. Other two more families had similar experiences with their missing love ones. They all lost contacts with their love ones around 10 am on December-24. 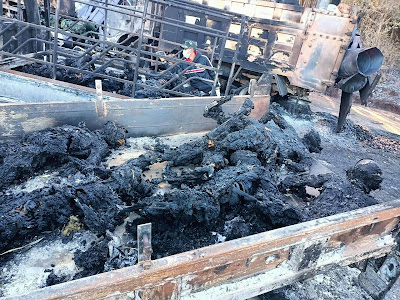 Mo-so villager Thelmar was woke up by the drones’ noises at about 2 am that morning on December-24 and saw 5 army drones covering the road near the village as if an army column was on the road.

Only after 9 am the sighting of army column was confirmed by Paul another villager. Paul told the villagers that he and his two nieces in a car to the Frusoe markets were stopped by Burmese soldiers at about five minute’s drive from the Mo-so Village. Once they heard the Burmese voices they immediately did the U-turn and came back to Mo-so.

Once they heard the bad news of nearby Myanmar soldiers the whole village erupted and everybody ran away and hid in the wood nearby. Following was the witness account of one daring youth and other villagers who climbed up a low hill nearby and watched the soldiers from a safe distance. 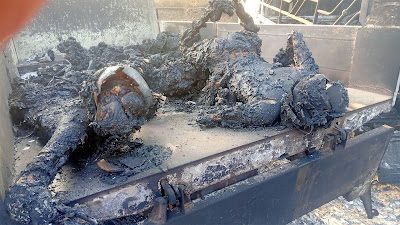 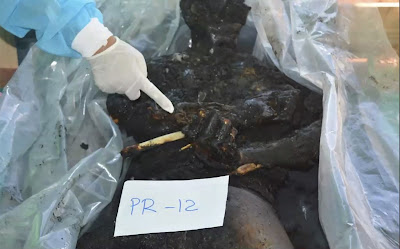 Myanmar Soldiers Burning Down The Vehicles

The low hill was not more than 250 yards from where the soldiers were stopping the traffic on the road except a thick groove of bamboo blocking their view of the terrifying Myanmar soldiers. But they could clearly see the cars and bikes coming past that point were no more as if the road block was active at around 10 am.

They also saw one black sedan and two motorbikes were stopped right there. And after about 10 past 10 am they started seeing the thick smoke coming up followed by some loud explosions which shot the fuel drums up high above the bamboo grove. According to the witnesses the fire and smoke lasted till the night time.

First they thought the soldiers were burning down only the vehicles not the people on them. After seeing the Myanmar soldiers happily marched back after the intense fire to their nearby LIB-531 compound at Frusoe Town which is only one hour away by foot they came down to the scene.

Only then the villagers realized the occurrence of mass slaughter and saw the burnt-out remains of so many people. All the people on the five trucks, two cars, two trawler-jeeps, and six motorbikes were bunt to crisp that their bones crumpled to ashes when touched. 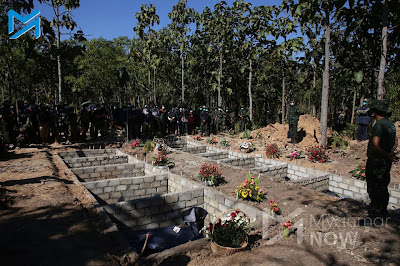 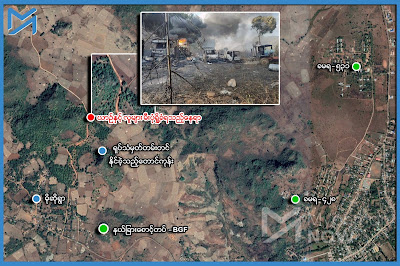