Suicide of A Burmese Maid in Singapore

(Following true stories are documented-sufferings of Burmese working in Singapore.) 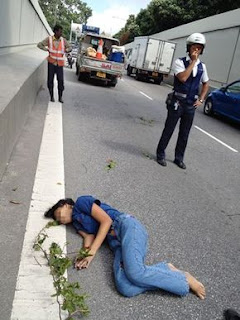 Suicide of a Runaway Maid

11 Dec 2011: A young Burmese woman working here in Singapore had attempted to commit suicide by jumping down from a fly-over bridge onto the busy freeway below. She is now being treated in Tan-tock-seng hospital.
She jumped down 4.5 meter from the fly-over at the intersection of Kalang-paya Lebar Expressway and the Pan-Island Expressway. She was said to be a domestic worker from Burma and seen running out of the offices of a domestic maid employment agency in Katong Shopping Centre.
According to the eye-witnesses she was standing on the flower beds on the edge of expressway with her arms stretched wide just before she threw herself over.
Luckily she fell into a tree before she hit the road and the broken tree branch had absorbed much of the impact.  Only her right arm and right leg were broken and the taxi coming along just after her body hit the road had stopped the traffic and the driver called the police.
According to the cab-driver even though she was in severe pain she was still conscious till she was taken to the Tan-tock-seng hospital by ambulance.
Police has released the information that the Burmese woman had told other maids back at the agency office that she wanted to commit suicide but she didn’t tell them why she wanted to kill herself.
Before her two other Burmese women, Khaing Thin Zar and Yin Nyein Pwint, committed suicides in similar circumstances. 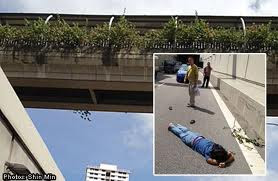 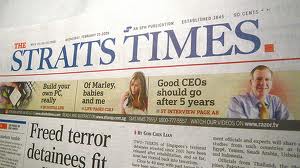 Min Thawda’s story was in next day Straits Times Newspapers. The news was inside in the Home Section. But my photograph of dying Min Thawda was large and prominent. And as usual the reporter had written a sensational story and it was a very good read. Especially the mourning wife’s interview could really sadden and seriously affect the mind of any reader.
And it didn’t take long at all for my mobile to ring non-stop. All the calls were from the Singaporeans who read the story and thus wanted to help the bereaving family. Wait a sec, how did you get my number? I asked them as I was curious. Easy, we called the newspaper and the reporter gave us your number. They replied.
By the way, I would like to talk a bit about the way these Singaporeans donate money for a good cause.
These people were giving money to Min Thawda’s family basing alone on their trust of me after reading the story. They wouldn’t even take the receipts from me for their money. Please send the family our donation was what they said. No need was their answers when I asked for their names.
Normally they called me and fixed a place to meet. Mostly at the Aljunied MRT Station since I was then living on Kallang Way. So I went and waited for them and they called me from inside the Station. Once I was confirmed as the same person I claimed to be they came straight up to me and gave me the money.
One Chinese Singaporean woman called me and said she was sorry and she didn’t have time to come and she was now in Raffles City and asked me to come and see her at 8 that night. So I went and met her.
She counted out a thousand dollars and gave me right there. I was so happy and asked her name so that I could tell the family. But she said no need, just send the family my money. And she then left me there standing with my mouth open wide as I didn’t even have time to reply.

Then the Myanmar Club here in Singapore heard about me collecting donations for Min Thawda’s family and they called me and I went and met them. U Sein Win and U Zaw Htun, I still remember. They were talking about collecting donations widely here through them and also from other countries. But I didn’t get a cent from them and later I lost contact with them.
Altogether well over six million kyat donations were collected here in Singapore from the Singaporeans and our Burmese friends working here. Most were from the Singaporeans. I sent all the money through my elder sister in Burma to Min Thawda’s family.
That reporter from Straits Times also promised one thousand dollars from the Newspaper but I didn’t get it. Believing him I even told Min Thawda’s wife that a thousand dollars more was coming and later I had to explain to her it was not.
Min Thawda left behind a son and daughter. My big sister took me to their house when I was back in Burma. They appeared to be doing well. With the money from us they opened a small grocery shop at their house and they were selling firewood and charcoal too. And the family had a commercial flower-nursery on their ground.
I was so happy then that they were doing fine!
******************************
Posted by Hla Oo at 1:30 PM