(Obituary by former British ambassador to Burma Vicky Bowman in The Independent.)

The death from a heart attack of Dr Nay Win Maung has robbed Burma of an intellectual and public policy analyst of great integrity. It is a particular loss given that Burma's politics are beginning to show positive signs, and the main protagonists – the military leaders and Daw Aung San Suu Kyi – are both adopting the more conciliatory approach which Nay Win Maung had advocated. The pace of reform is accelerating, and the US-led economic sanctions which he opposed are gradually being unwound.

Born in 1962 to parents on the faculty of the élite Defence Services Academy, Nay Win Maung eschewed what might have been a natural step towards a military career, and studied medicine, graduating in 1988 just before the pro-democracy demonstrations which led to the long closure of Burmese universities. However, as with many steered by high grades into medicine, he chose to take advantage of Burma's initial market economy opening in the early 1990s.


He began in the timber business, then set up Living Color magazine, which focussed on the economy and current affairs. The Living Colour Media Group, of which he became CEO, went on to launch two weekly papers, The Voice and Foreign Affairs, with a focus on domestic and international current affairs. These acted as a training ground for young journalists, who referred their boss as "Saya [Teacher] Nay". Each publication had to work within the strict confines of Burmese censorship, and regularly faced temporary suspension.
His links with the military and business élite gave him a good insight into the economy and the regime's inner workings, and granted him some protection. But they attracted suspicion and resentment, particularly from the Burmese-exile media, who drew attention to Living Color being founded with the help of his friend Ye Naing Wynn, son of the former Prime Minister and military intelligence chief Khin Nyunt. (The connection ceased when Ye Naing Win and his father were arrested in 2004, but Living Color continued.)
In 2004, Nay Win Maung spent some months in Yale as a "World Fellow", which strengthened his desire to build public policy capacity in Burma. In 2006, with friends in the business community he founded an NGO, think-tank and capacity-building centre, Myanmar Egress, with the aim of "developing identity, creating space, engaging society". Egress, which draws on foreign and Burmese diaspora academics, was the first capacity-building organisation in Burma to work above the radar training young people in strategy, management and communication, social entrepreneurship and economics.
In the aftermath of Cyclone Nargis in 2008, Egress students and alumni helped bring relief support to families in the delta area. As a result, Egress became increasingly supported by European donors and NGOs, leading to some resentment that they were too dominant in nascent Burmese civil society.
For this, and other reasons, Nay Win Maung was a controversial figure. Although he built links with some leading opposition figures, such as the comedian Zargana, he did not align himself with the main opposition party, the National League for Democracy, criticising their refusal to contest the November 2010 election. His ideas for achieving a breakthrough included a proposal that the NLD party leader Aung San Suu Kyi should accept the military-written constitution as a goodwill gesture, and that the opposition should contest the 2010 election – but only half of the seats, to avoid the landslide which had spooked the generals in 1990.
That said, he was bitterly disappointed (and apparently blindsided) that the military could go on to so blatantly rig the results, and he continued to be concerned that the new government could be hijacked by the more corrupt military hardliners. 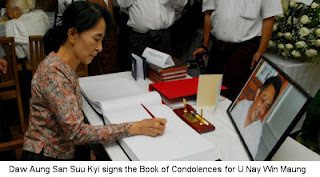 He met Aung San Suu Kyi last January shortly after her release to discuss his ideas for reform. The Egress think-tank also continued to send in advice on the economy, politics and international affairs to the new government, and recently attempted to broker peace talks between the government and ethnic armed groups, still the biggest problem facing Burma today.
The ground-breaking March 2011 inaugural address from the new President Thein Sein, which called for good governance and anti-corruption reforms, closely mirrored an op-ed published the previous month in The Voice. Again, Nay Win Maung attracted suspicion for his influence, despite the fact that the speech was widely viewed as a positive step. His approach was always neutral and bipartisan; at his funeral, wreaths from Aung San Suu Kyi and the Minister of Industry were placed prominently side by side.
To some extent the personal attacks were a conducting rod for the tensions between the Burmese opposition in exile and those who tried to change the situation from within. Overlying these tensions is the trend by donors to shift funding for civil society capacity building from the exiles to in-country programmes. In an interview with Asia Times a few months ago Nay Win Maung portrayed Burmese exiles as increasingly irrelevant and out of touch with the country's new dynamic, calling the belief that regime change and democracy could be achieved through social upheaval "overly simplistic".
Despite his intellectual approach, Nay Win Maung, a Buddhist, teetotal meditator (but heavy smoker) was also, like many Burmese, an amateur astrologer. He used a computer program which he claimed came from Nasa to cast horoscopes. His politico-astrological predictions were often overly optimistic and reflected in his glass-half-full editorials that irritated some. But by the time of his death it appeared that some of his hopes were beginning to materalise. His email to friends the day before he died eschewed horoscopes: "May I wish 2012 be the end of dark clouds and the beginning of a new era in Myanmar."
Nay Win Maung, physician, businessman and pro-democracy activist: born 30 June 1962; married (four daughters); died 1 January 2012.

Vicky Bowman is former British Ambassador to Burma (2002-2006), and previously Second Secretary at the Embassy (1990-1993). Served six years in Brussels (1996-2002) including three years working for Chris Patten. Studied Burmese at SOAS in 1989-1990 with Anna Allott and U Khin (former BBS Deputy Chairman) who gave her her Sunday-born Burmese name, Ohnmar Khin.

She kept up her Burmese language by contributing to the 2nd and 3rd editions of the Lonely Planet Burmese phrasebook and translating many Burmese short stories and poems including Mya Than Tint's 'Tales Of Ordinary People' published by Orchid Press, Bangkok.
Now back in the UK with the Foreign Office and married to Burmese artist Htein Lin, with baby Aurora aka Ar Youn Lin, born in December 2007 and already a regular British Burma Society meeting attender.
Posted by Hla Oo at 11:49 AM