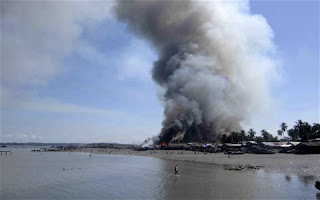 The Muslim wards of beautiful seaport Kyauk Phyu in Arakan State has been burning since 23 October by the Yakihine Buddhist mob hell bent on ridding Muslims off their predominantly Buddhist town.

Kyauk Phyu lies at the northern end of Ramree (Yan-byae) offshore Island. It has ten wards of which eight wards are Buddhists and two are occupied by a small community of Muslim fishermen. Followings are the list of all ten wards in Kyauk Phyu.

Both Pike-seik wards are Muslim wards and once the racial and religious troubles restarted again in nearby Min Byar town and spread to other towns of Arakan the Muslims in Kyauk Phyu were preparing for eventual Buddhist attacks even though the town was not affected in last June disturbances.

No one really knew who started the devastating fires. Buddhists claimed the Bengali Muslims started throwing their fire-rings at Buddhist houses and they had to retaliate. Some Kyauk Pyhu locals even claimed that the attackers were not local Buddhists but the outsiders from other Arakan towns who don’t like the Kyauk Phyu’s peaceful coexistence between the Buddhist majority and Muslim minority.

Anyway the result is the total annihilation of two Muslim wards in Kyauk Phyu and the town is now Muslim-free as the Bengali Muslims had fled the town by taking to the sea in their 80 odds motorised fishing boats.