Since the disturbances reignited again in the troubled Arakan our overzealous Army has been shooting dead many Yakhine Buddhists, probably just too many, while protecting the Bengali Muslim minority from them.

Sittwe Hospital is now filled with many young Yakhine Buddhist men with gunshot wounds caused by Burmese guns, not Bengali guns, and it boils the red hot blood of our Buddhist monks all over Burma.

Buddhist monks in Burma especially the young ones calling themselves “Yahan-Pyos” hate the Bengali Muslims and they think the job of Burma army is to shoot the Bengali illegals not the Yakhine Buddhist vigilantes killing the Muslims and burning the Bengali wards and villages in the Arakan.

One cannot blame the Burmese Buddhist monks as they know what would happen once the Bengali Islamists took over Burma, from their own experiences and the harrowing experiences of fellow Buddhists living dreadful lives in Islamic countries like Bangladesh and India and Pakistan.

Especially in Pakistan and Afghanistan the Muslims had killed off all the Buddhists, and all their pagodas and temples razed to the ground. The Talibans in Pakistan even kill young girls wanting to go to school. In their Islamist eyes our Buddhist monks are pure evil and our Buddha statues are just evil icons.

Yesterday Burmese Buddhist monks staged a peaceful protest against Burma army killing Yakhine Buddhist vigilantes in current Arakan incidents. Hundreds and hundreds of Buddhist monks gathered first at Sule Pagoda in Rangoon at about one pm on October 25 and later moved to the Rangoon City Hall.

Their four points demand to the President Thei Sein is as follows. 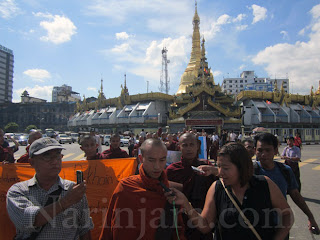 When the Islamist mob led by local Muslim politicians at Ramu (formerly a Burmese town of Panwar) ran riots in Bangladesh the Bangladeshi army and police quietly stayed still inside their fortified compounds and wilfully let the 50,000 strong Muslim mob of mainly teenage Madrassa students burn the 300 years-old Buddhist temples to the ground and kill the Buddhists including the monks the whole night.

The same thing happens in Pakistan, Malaysia, and Indonesia. That typically Islamic approach to Buddhist-cleansing is called “Letting the Extremist the Free Run in removing Infidels,” but our Burmese government has a very different approach.

Our beloved president will rather order the army to shoot the Buddhist crowd to protect the Bengali Muslims who are more than willing to kill the Buddhists including the old monks as they had displayed with ample evidence in last June Bengali riots at Maungdaw-Butheedaung region, their stronghold of Northern Arakan which they brutally captured in 1942 after killing all 100,000 odds Yahine Buddhist in an Islamic genocide while the whole Burma was in turmoil during the Second World War.

Our president and his advisors seem to worry more about Burma’s image abroad than the survival of their people on the western fringe of Burma or the western gateway into Burma. They are probably forgetting the population explosion in Bangladesh and there are more than 160 million people who have been eagerly eyeing our deliciously rich and bountiful country, Burma.

Please do not forget the most important fact that our brothers Yakhines are guarding that western gateway with their lives so that we have our Buddhist way of life still thriving in the Burma proper. If they fall we are gonna fall too.

The Bangladeshis want to come in and build their mosques and madrassa all over Burma and OIC and Saudi Arabia are right behind them with their military and financial might. It is scary for a Buddhist like me and the monks protesting on the streets of Rangoon.

The smell of death knell for Buddhism is all over Burma. Burma is the last frontier in stopping the relentless Muslim tide and our brothers Yakhines are doing it now and we have to help them with all our might.

But our president, who’d tasted a sweet flavour of being an internationally-acknowledged statesman in recent New York trip, has even threatened to take legal actions against the Yakhine nationalist parties and the Yakhine patriots behind the current and previous disturbances in Arakan.

Everybody in Burma knows the Yakhine nationalist parties and their leaders are behind the attacks on Bengali Muslims. They’d been marching with their Yahine crowd in the protest rallies against the Multinational Muslim Mafia OIC (Organization of Islamic Cooperation) all over Arakan.

I guess they aren’t afraid of the threatening rhetoric of the President who was an army general and who has the blood of thousands of Burmese Buddhist including the monks on his own hands especially during the Saffron Uprising in 2008.

But shooting our brothers Yakhin Buddhist dead is just too much for me and every patriotic Burmese, I believe. Our president should reconsider his orders to the army and the Burmese soldiers should really think before shooting at their own Buddhist brethren.

Buddhist soldiers killing Buddhists, unbelievable? It reminds me of the faces of Chin soldiers shooting at us the protesting students during the 1974 U Thant Uprising and other similar uprisings in Burma’s past. Burma army has that deviant practice of using minority ethnic battalions to kill the majority Burmese protesting on the streets of Rangoon.