Hero Welcome for President U Thein Sein Back from UN

(This post is direct from The Weekly Eleven Media on 1 October2012.) 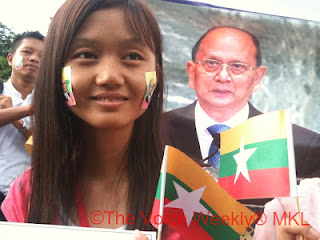 After attending and participating in the annual General Debate at the UNGA (United Nations General Assembly) Burma President U Thein Sein has landed back at Rangoon International Airport on the morning of October First.

And believe or not there were thousands and thousands of his fellow country men and women welcoming him back home at Rangoon Airport. And it was the very first time in last 60 years many Burmese are so enthusiastic about one of their leaders.

In addition to the senior leaders and people from the ruling party USDP (Union Solidarity and Development Party) his own political party, there were people from all walks of life. Highly visible among the crowd were movie actors and actresses and famous Industrialists. Also were businessmen and women, many young workers from various garment factories, and various ethnic youth groups.


Most were at the Rangoon airport since very early morning with their banners and placards declaring “Congratulation Mr President”, “Welcome Back Home”, “Thanks For Raising Burmese Pride Internationally”, and “Welcome Our President Who Implements the Historical Chang for his 60 million People”, etcetera, etcetera.

The Singapore’s Silk Airway plane carrying U Thein Sein landed at 9:20 am and the people waiting there welcomed him eagerly with loud cheers. “Long Live President” and “We’re Proud of You, President” were common cheers from the welcoming crowd inside and outside the Rangoon International Airport concourse. 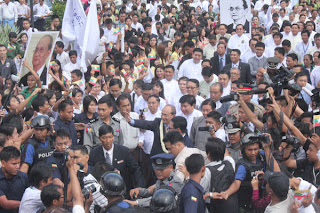 Following was what U Win Aung the Chairman of MCCI (Myanmar Chamber of Commerce and Industry) said of the occasion.

“We’re here to welcome our president who has put tremendous efforts in benefitting our country. We’re really glad that he has been opening doors internationally for the great future of our country. We’re also very grateful for that. So we’ve arranged this welcoming as we truly believe our President will put all his efforts and energy into raising the living standard of our people.”

A young Yakhine Buddhist woman at the airport also said, “I’m from Sittwe, the Yakhine State. I’m temporarily in Rangoon attending a training class given by Myanmar Egress. I’m glad that I get a chance to see our President back. I wasn’t expecting. I’m really grateful for all the great changes he’s brought into our country. I would like to ask him to develop our country more and more.”

Hundreds of garment factory workers from all over Rangoon were there with a huge banner declaring “We especially welcome our President who’s done so much for our garment industry and us workers”.

Following was what a young female garment factory worker from the Let-war Garment Factory at Hlaing-thar-yar on the outskirt of Rangoon.

“We’ve been here since 7 in the morning. Factory has arranged for us to come here. We’re really happy that we’re welcoming the President back. We’re asking him to do more for us. And we believe he will raise our living standard higher and higher.” 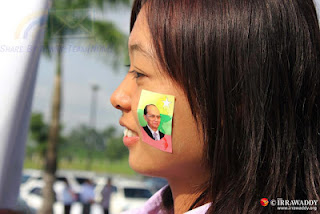 Thin Zar Aung with President’ tiny photos on both her cheeks in the photo said, “Today I’m here to see the President. Nobody asked me to come. I just come here at my free will. I don’t even wear a nice dress. Just jeans. When president came out I just pushed through the media people to see him close-up. Without planning ahead, of course. The security men were clearing a way for him through the crowd.

The security men had to push the cameramen off his way. It doesn’t matter. Anyway I came here for him and I wear no political colour. I saw him really, really close. I’m satisfied. I’ve got a good photo of him and many of my friends took his photos too. We’re so proud. Our country needs both him and Daw Suu. For the people. I don’t believe they are only after the power. I’m one of their people.”

Tin Win a committee member of the Rangoon Division Committee of USDP the ruling party also said, “He is our president and he was once the chairman of our party USDP. We have duty to support him who is doing a tremendous work by implementing democracy for all 60 millions of us. That’s why we are here with 150 of our people to welcome him back.”

President U Thein Sein had left for the United States on September 24 and since he had done such many tasks as meeting Daw Aung San Suu Kyi the Chairman of NLD (National League for Democracy) and a member of parliament, meeting Hilary Clinton the US Secretary of State, giving a speech at the 67th UN General Assembly at the New York UN Headquarters, meeting the Bangladeshi Prime Minister, meeting Bill Clinton the former US President, meeting Henry Kissinger the former US Secretary of State, giving a friendly seminar at New York Asia Society, and giving various press conferences and many interviews to foreign media like BBC and foreign-based Burmese media organizations like DVB. 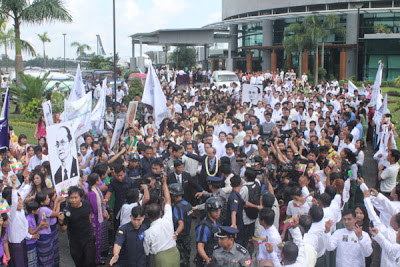 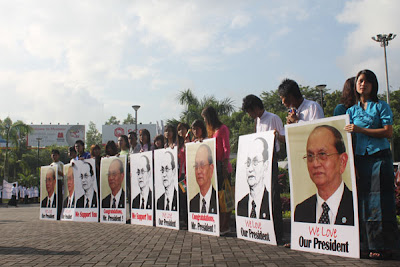 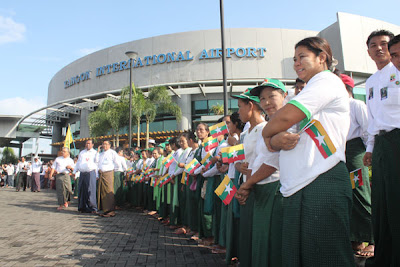 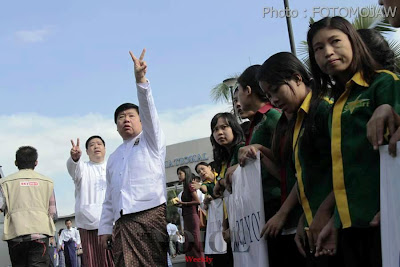 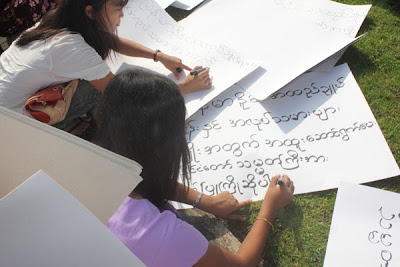