(This post is based on various articles from the EMG site.) 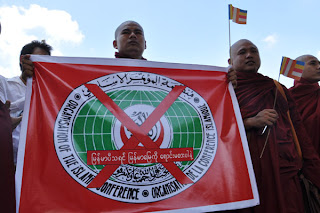 On October 15 Burma President U Thein Sein has ordered he will not allow the OIC (Organization of Islamic Cooperation) to open any office whether liaison office or representative office or logistic office for supporting the so-called Rohingyas or for protecting their God-given rights.

The Presidential order was on all the media including the president’s office own WWW site. The President has apparently backed down and corrected the serious oversight in dealing with the Multinational Muslim Mafia OIC after the angry mass protests all over Burma.

The mass protests has started from Sittwe the capital of Yakhine State and spread to Rangoon and Mandalay and other major towns. And a continuous mass protest against OIC opening office in Burma was planned to begin in Rangoon on 15 October.

But on October 14 Major Zaw Htay the Director of President’s Office publicly denied on his Facebook page the existence of an agreement between the government and OIC while confirming the OIC Office in Rangoon is just a temporary liaison office. He also added that President has already directed his government ministers to reconsider the continuation of that OIC’s temporary office in Rangoon.

But bowing down to mass protests all over Burma President Thein Sein has finally made a quick decision and ordered his minsters not to allow OIC to open any office in Burma at all.

Maha Akeel, a spokesperson for the OIC, says the group has still not received official notice that they have been denied permission to open an office, but the president’s announcement was a shock.

"This is a setback because we have a written, signed agreement to allow for the opening of a humanitarian office which will help all the communities living in the Rakhine region, not just Muslims," he explained.

According to the widespread rumors circulating in Rangoon the OIC temporary liaison office run by four OIC personnel is at the Burma Red Cross Society building on the Strand Road but the BRCS has strongly denied that the OIC office is operating in their headquarters building.

The planned protest in Rangoon on October 15 went ahead despite the Presidential order to ban the OIC offices in the country. The Burma VJ's video of the Rangoon mass protest led by the thousands of Buddhist monks is at below.

OIC General Secretary Ekmeleddin Ihsanoglu confirmed on 17 October that he has received the letter of Burma government decision from the Border Affairs Minister.

According to him the minister General Thein Htay has basically informed him that because of mass protests all over Burma the Burma government will not continue with the opening of OIC offices since the government has to respect the people's wish.

The OIC General Secretary added that on September 11 this year OIC and Burma government signed the agreement to let OIC establish offices in Rangoon and Sittwe and a temporary liaison office has already been operating since then in Rangoon. He also warned that the matter will be discussed as an urgent issue at the coming OIC meeting next month in Djibouti.

(OIC has decided at its 2011 meeting in Mecca to support the so-called Rohingyas with all its financial and military might and sponsored with multi-million Euros and US$ the formation of sole Rohingya umbrella  organization ARU (Arakan Rohingya Union) comprising all 27 Rohingya organizations worldwide including three extremist armed-insurgent organizations designated as Al-Qaeda affiliated terrorist groups by the United Stats.)