(This article "Romney's Go-To Economist" by David Segal is from the New York Times.)

“I HOPE you’re sitting down for this,” said Ali Velshi, the CNN anchor, staring into the camera, his voice booming with incredulity about a campaign promise issued by Mitt Romney: that, if elected, Mr. Romney would create 12 million jobs in four years.

Having framed this idea as preposterous, Mr. Velshi introduced R. Glenn Hubbard, the dean of Columbia Business School, a Romney campaign adviser and a “very smart man,” as the host put it. So smart, Mr. Velshi told Mr. Hubbard, that “you couldn’t have been involved in the writing of that policy.” Why? “Because you would know that that is just not possible.”
Wearing a dark suit and projecting an air of geeky, avuncular calm, Mr. Hubbard appeared before a blue backdrop festooned with the words “Columbia Business School.” If he was supposed to be cowed or disarmed by the bluster or flattery, he did not show it.

“It is absolutely possible, Ali, both in terms of models of policy effects on the recovery and historical experience,” he said, in a tone that was professorial but not patronizing, “If you look at the recovery from ’74, ’75, or ’81, ’82, you can easily get job growth in this range. We have the wrong policy mix. We’ve had a nasty shock, we’re in a different situation, but we could do a lot better.”
Succinct, authoritative and unabashedly partisan. Leave aside that most economists see a vast difference between the recessions of the ’70s and ’80s and the crisis that began in 2008. This was exactly the sort of performance Mr. Hubbard has been delivering for the Republican candidate, both on television and in op-ed articles, for more than a year. Straddling the occasionally uncomfortable line between academia and politics, Mr. Hubbard is playing a role now familiar in modern campaigns: the in-house economist.
Mr. Hubbard has helped to draft many of Mr. Romney’s economic and tax policies, and, at least implicitly, lent his imprimatur to others he did not conceive. The benefits are potentially mutual. If Mr. Romney is elected, Mr. Hubbard is considered a strong candidate for the job of Treasury secretary and even, after Ben S. Bernanke’s term expires, chairman of the Federal Reserve.

(Robert Zoellick, former president of the World Bank, is another possible contender for the Treasury job.)
To the job of in-house economist, Mr. Hubbard brings a rare ability to translate complex policy into plain English, as well as a conservative’s love for small government and a faith that cutting taxes will spur growth. During a stint as chairman of the Council of Economic Advisers for President George W. Bush, from 2001 to 2003, Mr. Hubbard was known as the principal architect of the Bush tax cuts. 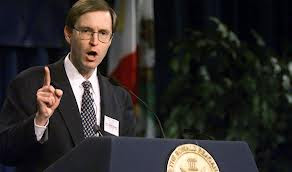 Mr. Hubbard also brings to this job a certain amount of baggage. He appeared briefly in “Inside Job,” a scathing and Oscar-winning 2010 documentary about the financial crisis. The film has a segment about high-profile professors who blessed many of the financial instruments that led to the fiasco. Enter Mr. Hubbard, who is presented as a leading thinker far too cozy with industries he ought to be assessing at a critical distance.
“You have three more minutes,” he tells an interviewer who is pressing for the names of his consulting clients. And then, as his face contorts with rage, he adds, “Give it your best shot.”
MR. HUBBARD is hardly the only marquee economist to parlay his experience and stature into millions of dollars, for speeches, papers and expert witness testimony.  Lawrence H. Summers, once the Obama administration’s top economic adviser, pocketed about $5.2 million in compensation for giving advice to a hedge fund. But in Mr. Hubbard’s case, some of his amply compensated work takes policy stands that buttress the viewpoints of the corporate interests that are paying him.
That’s been true of the mutual fund industry, which has paid him more than $1 million over the years. In an academic paper and a book, he took a strong position favoring the industry’s approach to fees, which critics say hurt everyday investors. He was paid what he called an honorarium of $150,000 for the academic paper by the insurance arm of theInvestment Company Institute, the mutual fund industry trade and lobbying group.
“Dean Hubbard is a mercenary,” says John P. Freeman, emeritus professor of business and professional ethics at the University of South Carolina School of Law, who has accused the mutual fund industry of profiteering, “out to protect fund managers who are taking advantage of investors.”
Mr. Hubbard says the source of funding is irrelevant because his academic writing stands on its own.