(My observations based on the Staff article from The NEW YORK TIMES on 11 December 2017.)

We have to be aware of Muslim men with fundamentalist appearance amidst us on public transports such as subways, metros, and buses. We need to be alert and alarmed in case a Muslim suicide-bomber is among us and ready to blow us infidels and himself out of this Kafir world of infidels.

The fundamentalist Muslim men have a deeply disturbing believe driven solidly into their minds since they were very young by their mosque Imams with a direct help from the Koran that if they kill even one infidel kafir they would go to Islamic heaven and be rewarded with 72 virgins with re-virginating vaginas (still with a non-FGMed clitoris) after each and every penetration for eternity.

The fundamentalist Muslim men living among us infidels are not that difficult to identify if you know what you have to look for. There are three distinctive external appearances:

Sahih Bukhari, Vol:7, Book:72, Hadith#780: This hadith shows that pious Muslim men has to cut their mustaches short and grow their beards (opposite to non-muslim men). Muslims also believe that the Prophet Muhammad said that we can grow our beards but must keep our moustaches short.

2. Bruise (or bruises) on their forehead from excessive praying.

Velcro. Zip ties. A pipe bomb. And, after the smoke cleared and the commuters ran, a man slumped over in a tunnel beneath Midtown Manhattan, his midsection blackened and bloodied from the force of an explosive device strapped to his own body.

Of all the terrorist threats that loomed in New York in the aftermath of Sept. 11, 2001, few were as worrisome to counterterrorism officials as a suicide bomber walking into one of the world’s busiest transit hubs.

Despite a couple of recent terrorist attacks, and the more than two dozen plots that law enforcement agencies have thwarted here in the last 16 years, no one in that period did what the police have long feared: tried to blow himself up in a crowd.

Akayed Ullah, an immigrant from Bangladesh, is the person officials said crossed that threshold when a pipe bomb tied to his body exploded in a passageway between the Times Square and Port Authority subway stations, in the first attempted suicide attack in New York City since Sept. 11.

No one was gravely injured, and New Yorkers largely carried on with their commuting on Monday. But with the explosion, another chapter was added to a recent pattern of crude terrorist attacks in New York.

No longer were suicide bombings only a gruesome hallmark of conflicts abroad — in post-invasion Iraq, for instance, or in Israel and the Palestinian territories.

And no longer were the psychological ripples from such an attack — the eyeing of fellow subway riders, the suspicion that anyone could turn a train car into a death trap — confined to regions like the Middle East, Southeast Asia and Europe, where citizens are returning home in large numbers from terrorism hotbeds like Iraq and Syria.

With the Islamic State shedding territory overseas and fighters frustrated at the prospect of reaching the battlefield abroad, once-unthinkable tactics have made an appearance in New York, too.

“It’s scarier, because you don’t even know,” Fabian Fanfair, a United Parcel Service supervisor from Brooklyn, said on Monday. “Somebody having that on him, you don’t know who it could be. I could be just sitting on the train taking a nap like I usually do, and something like that could just happen.”

Suicide bombings are exceedingly difficult for the police to stop once they have been set into motion, and the attack left counterterrorism experts reckoning with how guerrilla tactics recently adopted by the Islamic State as it faces losses abroad could be countered.

“Old tactics, they never really come off the table,” said David C. Kelly, a former assistant commissioner for counterterrorism in the New York Police Department. “It’s probably one of the toughest attack methods to detect and prevent.”

After the Sept. 11 attacks, Mr. Kelly said, police officials started working up a list of contingencies, and a scenario like Monday’s attack was near the top of the list. Investigators held tabletop exercises to formulate, among other things, how investigators would sweep the subway system afterward for additional explosives.

But Lisa O. Monaco, a former Homeland Security and counterterrorism adviser with the Obama administration, said that the counterterrorism architecture created after the Sept. 11 attacks was intended to protect against well-organized groups like Al Qaeda, not a kind of lone-wolf attacker like Mr. Ullah.

“If they’re determined to die in the process of the attack, you are much less likely to detect planning of follow on travel or attempts to escape,” said Ms. Monaco, who is now a distinguished senior fellow at the New York University Law School.

In 2009, the government foiled a planned suicide attack. Najibullah Zazi and two friends were accused of planning to strap explosives to themselves, split up and board packed trains from the Grand Central and Times Square stations at rush hour. Mr. Zazi realized that he was under government surveillance and later pleaded guilty to what officials described as a Qaeda plot.

The police broke up another suspected suicide attack in 1997 when officers found the makings of pipe bombs in a Brooklyn apartment. Other plots, though crude, leave telltale signs that something is amiss, like the car bomb in Times Square in 2010 that prompted an evacuation after a sidewalk vendor noticed smoke coming out of vents in the car.

The truck attack in Lower Manhattan on Halloween was also reminiscent of a tactic more prevalent overseas.

Officials have puzzled over why more attackers have not tried to commit suicide bombings in the United States. Mr. Kelly, now an associate managing director at K2 Intelligence, which offers investigative and consulting services, said officials wondered if domestic terrorists were trying to compensate for their smaller numbers by preserving themselves for future attacks.

Jean-Charles Brisard, chairman of the Center for the Analysis of Terrorism, a research organization in Paris, said the United States, unlike Europe, also had fewer citizens returning from terrorism hot spots abroad. “The United States was not as impacted by the jihadi phenomenon,” he said.

But he said Islamic State strategy has changed as it loses its geographic foothold in Iraq and Syria. As part of its effort to stay relevant, it has increasingly directed its supporters to carry out attacks in New York City.

He pointed to accounts on the encrypted chat service Telegram, known for disseminating jihadi propaganda, which in recent weeks has published apocalyptic images of the New York City skyline in flames. One, which depicts a camouflaged fighter holding a black ISIS flag, included the caption “Very soon we’ll be the one who will fight you, and you’ll fight us no more.”

With the United States choking off people’s efforts to get weapons training overseas, and also making it difficult for foreign fighters to enter the country, Islamic State supporters in the New York area and around the world are turning to tutorials on encrypted communications channels. “Even someone who has never dealt with chemistry or bomb making could be able to make a sophisticated device,” Mr. Brisard said.

In the past such attacks have prompted many countries, including the United States and more recently France, to expand government surveillance and impose certain restrictions in the name of security. After subway and bus blasts tore through London in 2005, for example, the police in New York started inspecting some bags coming into the subway system as a deterrent (till the pro-Muslim new NYC mayor DE Blasio stopped it completely to appease the Muslims). 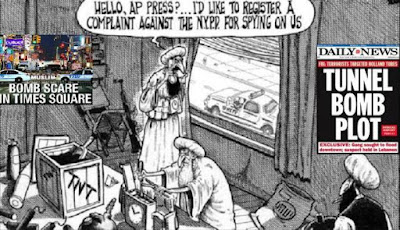 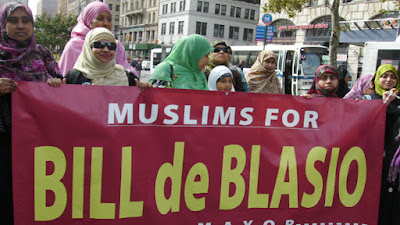 But countering suicide attacks can be a challenge even in countries with weak civil rights protections and expansive law enforcement powers. Russia, where suicide bombings are not uncommon, particularly on public transportation, has responded — mostly in vain — with a grab bag of heavy-handed tactics. After a suicide bomber killed 16 people in an attack on the St. Petersburg Metro in April, two suspected accomplices who had their citizenship revoked said the police had beaten and waterboarded them, according to Human Rights Watch, a nonprofit.

Such attacks typically result in the increased use of racial profiling by law enforcement on public transportation, said Tanya Lokshina, the Russia program director for Human Rights Watch in Moscow. “We can only hope the U.S. authorities do not react in a similar manner,” she said.

After the attack on Monday, some New Yorkers remained sanguine. They said the goal of a suicide bombing was no different from that of the Chelsea bombing last year or the truck attack on Halloween: to scare people. They said they would keep going about their routines.

“We’re not surprised because we’ve had everything else,” said Stella Pulo, a Manhattan resident. “A bit of complacency has set in that this is now the norm. Somebody said to me this morning, ‘We don’t say ‘Have a good day’ anymore. We say, ‘Be safe.’”

Profile And Run As Fast & As Far Away As You Can

There are two major red flags that when taken together become a RED ALERT for a possible suicide bomber on a public transport system. On his forehead sits a zebiba, caused by friction generated by rubbing the forehead on the prayer mat multiple times per day during Muslim prayers.

The second cause for concern is the beard without a moustache. Taken separately, these traits may or may not reveal a Muslim fundamentalist. However, when a Muslim has both, the odds of having a fundamentalist in your midst go up exponentially.

The final confirmation is if he is wearing an Islamic robe. If he is then you just have to move away from that mother-fucking Muslim as fast and as far away as you possibly can. Run Baby Run! It is so messy that your family will have difficulty identifying your remains positively if you were sitting or standing so close to a suicide-bomber when he blew himself up and you and others nearby.

French police recently shot dead a Muslim man named Bertrand Nzohabonayo who attacked them with a knife in a police station while shouting “Allahu Akbar” (“God is greatest” in Arabic), a source said.

The man injured the face of an officer at the entrance to the police station in Joue-les-Tours near the city of Tours in central France and injured two other before he was shot, the interior ministry said. Anti-terrorist investigators were probing the incident, a judicial source said.


The perpetrator was a French citizen born in Burundi in 1994 and known to police for common crimes, a source close to the case told AFP, adding that the attacker “shouted ‘Allahu Akbar’ from the moment he entered until his last breath.” Just look at his photo below.