'Merkel is insane': meet the woman leading the AfD in Germany: The Local sat down with Dr Alice Weidel, the new leader of the Alternative for Germany. She may have the CV of an establishment liberal, but a half hour in her company exposed a firebrand who doesn't hide her disdain for Chancellor Angela Merkel.

At a popular cafe in central Berlin, Weidel is explaining how the teachings of Confucius influence everything in modern Chinese society from the failure of pro-democracy protests in Tiananmen Square in 1989, to the recent execution of a police chief on graft charges. She has already cleared up the differences between the Beijing and Shanghai dialects, and detailed the astonishing lengths the government went to to give Beijing a face-lift before the 2008 Olympics.

If you don’t know who Weidel is, you might be surprised to learn she was picked in April to stand alongside party-deputy Alexander Gauland as Spitzenkandidatin (lead candidate) for the Alternative for Germany (AfD) in September’s national election.


She has a doctorate in international development and speaks conversational Mandarin Chinese after years spent in East Asia. Now back in Germany, she lives with her female partner and their two children on Lake Constance. But while this might look like the CV a liberal party would drool over, as soon as conversation turns from China to refugees, Islam and gender, sparks start to fly.

'The only real opposition'

Laying out her pitch for why people outside Germany should give her party a hearing, Weidel says that "the AfD is the only real opposition party which stands up for the rule of law, in Germany and in Europe."

"On the European level the bailouts [of Greece] have breached the Maastricht agreement, and it's no bailout clause. The ban on bond buying by the European Central Bank has been breached. We are the only party talking about this - this is, by the way, the reason that we were founded."

The AfD is the youngest party on the German political scene, having been set up by a group of economists as a protest party against the Euro single currency in 2013. "The AfD is also the only party which calls for referendums, meaning direct democracy... and then there is the migration crisis," Weidel adds.

If there is one topic which connects the worldly Weidel with the rank and file of the AfD more than any other, it is likely her burning anger at Angela Merkel's decision to open Germany's land borders to refugees in August 2015.

August 2015 was also a turning point in the short history of the AfD. While the party was languishing under the five percent mark necessary to make it into the parliament over the summer, the sudden arrival of tens of thousands of asylum seekers every day in the autumn sent worried voters flocking to them, as they declared war on Merkel's open-door policy.

"It just can't happen that the state gives up control of its own borders," Weidel says. "That is a contravention of German asylum law.”

She explains that allowing people to arrive in Germany via neighbouring countries such as Austria breaches Paragraph 16a of the German asylum law, whereby refugees cannot apply for protection in the Bundesrepublik if they arrive from another country that adheres to the Geneva Convention on refugees.

"Since September 2015, we have had a policy of open borders without legal basis. It is an exceptional circumstance which didn't even receive the approval of the parliament. It was just done. In an emergency you can do that – for a few days to absorb the shock – but not for one and a half years," Weidel says.

It's worth noting that in August 2015, Germany suspended the so-called Dublin rules for Syrian refugees, which state that refugees must apply for asylum in the EU country where they first arrive. A few months later in November that year, Germany announced it would reinstate the rules, except for those who arrived in overwhelmed Greece, which has been one of the main ports of entry into the EU.

Then in March of this year, the government again started returning asylum seekers to Greece.
Germany's asylum policies, Weidel argues, have had several negative effects, including heightening the risk of terrorist attacks taking place in Germany.

But it also encouraged countries on the periphery of the EU, such as Greece and Italy, to stop securing their external borders and to simply send migrants and refugees on to Germany, according to Weidel.

What Germany should have done instead of opening its borders was "massively invest" in the UN Refugee Agency and in countries neighbouring Syria such as Jordan, says the AfD leader.

"They could also invest in special economic zones in the region so that people aren't ripped out of their social contexts, which leads to a huge 'brain drain' there." But it is clear that Weidel doesn't just have the interests of the Middle Eastern economy at heart.

By adding up asylum seekers, illegal immigrants, and families of asylum seekers who are allowed to join their loved ones at a later date, Weidel arrives at a figure of 8 million new inhabitants of Germany based on arrivals in 2015 alone. (According to official figures 890,000 asylum seekers arrived in Germany in 2015).

"That is completely crazy. That is 10 percent of the German population in one year." And her predictions for what that means for Germany are apocalyptic. "The country will be destroyed through this immigration policy. Donald Trump said that Merkel is insane and I absolutely agree with that. It is a completely nonsensical form of politics that is being followed here.

"Germany needs qualified migrants. The people who have come here as refugees are illiterate, they don't have any training. Eventually they'll have to go back, this just can't go on." For Weidel the refugee influx is the result of Germany still not having a law determining who can emigrate to the Bundesrepublik.

"We are the only party calling for an immigration law based on the example set by Canada. We need qualified migration. We are an industrialized nation. We don’t need illiterate people." To say that this topic gets Weidel riled up is something of an understatement. She finishes by switching into English.

"I'm sorry but this entire policy is driving me up the wall. It is outrageous what is going on here. We have a completely headless government that has no idea what it is doing. It is acting based on stupidity, ignorance and irresponsibility. You really need to ask, are Germans paying their taxes for this?"

Migrants unsuited to the German economy aren't the only threat Weidel sees in the mass migration of 2015. The fact that most of the asylum seekers were Muslim also troubles her. "Of course" Islam poses a danger to Germany, she says.

"There are 1,200 people who pose a threat to the country here, who aren’t being deported. I have to be very honest, from my point of view this country has completely lost control over civil society.” Arab countries such as Saudi Arabia "have free hand to send their imams to Germany with their stone-age sharia populism to tap into the Muslim population here."


Meanwhile the fact that the state has given control of Islam classes in schools to Ditib, a religious association tied to the Turkish government, irks her. "Lessons in Islam should be taught by a department of the German government, not the Turkish one," she says. 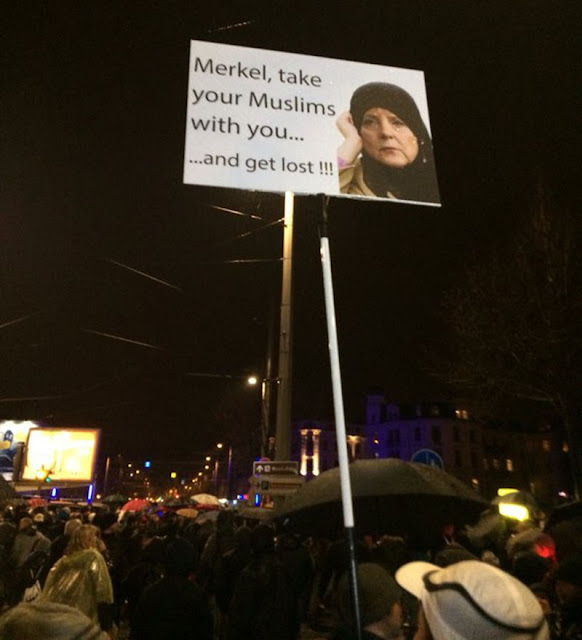