(Yashwant Raj’s article from The HINDUSTAN TIMES on 30 December 2017.)

Is Trump admin giving up on Pakistan? US to deny military aid worth $255 million: The fresh move by the Donald Trump administration reflects its complete disillusionment with Pakistan, which had sought to brazenly disregard the explicit warnings issued by the US President personally and leading members of his cabinet.

The Trump administration on Friday announced the United States will deny Pakistan military aid amounting to $255 million as it expects Islamabad to take decisive action “against terrorists and militants on its soil”.

“The United States does not plan to spend the $255 million in FY 2016 in Foreign Military Financing for Pakistan at this time,” said a spokesperson of the President’s National Security Council in a statement to Hindustan Times.


“The President has made clear that the United States expects Pakistan to take decisive action against terrorists and militants on its soil, and that Pakistan’s actions in support of the South Asia Strategy will ultimately determine the trajectory of our relationship, including future security assistance.

“The Administration continues to review Pakistan’s level of cooperation.”

The statement reflected and sealed the administration’s complete disillusionment with Pakistan, which had sought to brazenly disregard the explicit warnings issued by President Donald Trump personally and leading members of his cabinet, such as secretaries James Mattis and Rex Tillerson.

“This could be the severest blow dealt to Islamabad by this administration if it indeed decided to withhold it,” said a leading US expert on Pakistan, who did not want to be identified. “There is more coming,” the expert added.

The amount, $255 million, is left over from $1.1 billion aid earmarked for Pakistan in 2016, and which included non-military aid as well. It was cleared for handing over in August, just days before it would lapsed as unspent money.

First reported by The New York Times, the move to withhold the money, which may not be large but would have signaled US backing, is reported to have come shortly after Pakistan refused to hand over to the Americans an operative of the Haqqani Network apprehended during the rescue of an American-Canadian family in October.

The Haqqani Network is an affiliate of Afghan Taliban and works out of Pakistan, inflicting massive casualties on US-led international coalition in Afghanistan. Frustrated by Islamabad’s reluctance to give them, the United States has tied large portions of military aid payments to Pakistan to its actions aimed at debilitating the network.

Pakistan, however, has chosen to lose hundreds of millions of dollars in such payments over 2015 and 2016, instead of kicking out the terrorists. And it has lost equity.

The Trump administration was clear from the start it wouldn’t countenance continuity in ties and aid without real changes. “We have been paying Pakistan billions and billions of dollars at the same time they are housing the very terrorists that we are fighting,” President Donald Trump had said unveiling his new South Asia strategy in August. “But that will have to change, and that will change immediately.”

But there was no marked change in Pakistan’s behaviour, as was publicly attested by a top US military commander, General John Nicholson, in November, three months after Trump’s unequivocal warning.

There have been signs, instead, of resolute defiance, such as the release of Lashkar-e-Taiba founder Hafiz Saeed from house arrest, An outraged White House used unusually harsh language and tone to demand his rearrest, with a warning that failure could have “repercussions” for bilateral ties.

Saeed remains free, and Pakistani officials have sought to shift the blame for it on the independence of the country’s judiciary, when law enforcement and prosecution remain with the executive branch.

And they sought to blame India for providing insufficient incriminating evidence — in connection with the 2008 Mumbai terrorist attacks carried out by Saeed’s Lashkar-e-Taiba. There is a US bounty of $10 million for the man’s arrest.

Denial of aid, many critics of Pakistan argue, will unlikely make an impact on Islamabad and they have called for harsher measures. Stripping Pakistan of the status of a non-NATO ally, for one, which could cost it military aid in terms of money and equipment. And, more punishing perhaps, would be to declare Pakistan a state sponsor of terrorism, such as Syria and North Korea, which could severely cripple Pakistan.

That’s the impending “more” indicated by the South Asia expert. 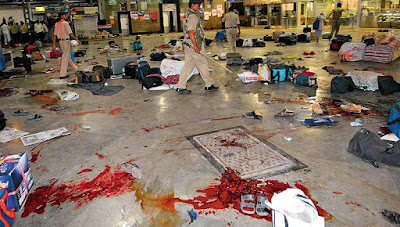 ISLAMABAD, Pakistan — Pakistani authorities released the alleged mastermind of the 2008 Mumbai terror attacks from house arrest, but he still has a $10 million U.S. bounty on his head.

Hafiz Saeed, whose arrest in January was seen as a signal of a broader shift in Pakistan’s treatment of extremists, was freed before dawn Friday local time in the city of Lahore, according to Hafiz Abdul Rauf, a spokesman for the Islamist cleric's charity. "I’m happy that no allegation against me was proved, which could have done damage to me, or my country’s interests," Saeed later told supporters. "Thank God, we were vindicated."

Saeed ran the Jamaat-Ud-Dawa organization (Party of the Faith), which is thought to be a front for the Lashkar-e-Tayyaba militant group. India believes that Lashkar-e-Tayyaba was behind the deadly attack in Mumbai.

Pakistan has been detaining and freeing Saeed off and on since the attacks left 166 dead, including several Americans. His release came after a panel of judges dismissed a government request to continue his house arrest, which ended Thursday. Four aides had already been released.

The government's decision to place Saeed under house arrest in January was driven in part by President Donald Trump’s arrival on the world stage as well as pressure from China, according to military insiders, and his release prompted a sharply worded statement from the State Department.

The United States is "deeply concerned" about Saeed's release, given that Lashkar-e-Tayyaba is "responsible for the death of hundreds of innocent civilians in terrorist attacks, including a number of American citizens," the statement said. "The Pakistani government should make sure that he is arrested and charged for his crimes."

India's External Affairs Ministry also condemned the release, and said in a statement that a "self-confessed and U.N. proscribed terrorist was being allowed to walk free and continue with his evil agenda."

"He was not only the mastermind, he was the prime organizer of the Mumbai terror attacks in which many innocent Indians and many people from other nationalities were killed," spokesman Raveesh Kumar said in a statement. Kumar said Saeed's "release confirms once again the lack of seriousness on the part of Pakistani government in bringing to justice perpetrators of heinous acts of terrorism."

Like much of Pakistan's establishment, Saeed was virulently anti-India and campaigned against New Delhi’s occupation of the disputed territory of Kashmir for years. Often a guest on conservative television talks shows, the popular jihadist still attracts large crowds with his anti-American and anti-Indian diatribes in rallies and protests.

Even though Pakistan has been involved in extensive counterterror and counterinsurgency operations against al Qaeda, the Pakistani Taliban and the Islamic State — the military says it has lost more than 7,000 soldiers battling terrorists since Sept. 11, 2001 — it is often blamed for selectively harboring certain other militant groups. These include elements of the deadly Haqqani network in Afghanistan, the leadership of the Afghan Taliban, as well as Lashkar-e-Tayyaba.

Saeed's release could once again sour U.S. relations with nuclear-armed Islamabad, which had seen an apparent improvement in relations after the rescue by Pakistan’s military of the American hostage Caitlan Coleman and her family on Oct. 13.

"This is a positive moment for our country's relationship with Pakistan," Trump said in a statement after Coleman was freed. "The Pakistani government's cooperation is a sign that it is honoring America's wishes for it to do more to provide security in the region."

Ties between Islamabad and Washington had deteriorated during Trump’s first months in office. In August, he warned that Pakistan had “much to lose” if it failed to cooperate with the U.S. in neighboring Afghanistan. He also expressed a desire to see India — Pakistan’s archrival — become an active stakeholder in stabilizing Afghanistan.

Before becoming president, Trump criticized Pakistan and said in a tweet: "Get it straight: Pakistan is not our friend. We’ve given them billions and billions of dollars, and what did we get? Betrayal and disrespect—and much worse. #TimeToGetTough"


For years, the Pakistanis have been blamed by the U.S. for not doing enough in their counterterrorism efforts to end the Afghan war — the longest military engagement in America's history. Islamabad has rejected the criticism, saying it has also suffered being an ally of Washington in the war against terror.