Barack Obama The Muslim Apologized – But This Was What Great Ronald Reagan Did When Iran Attacked US Navy in 1988: “They must know that we will protect our ships, and if they threaten us, they will pay a price.”

With those words, President Ronald Reagan justified his approval of Operation Praying Mantis, a day-long engagement in which U.S. Navy and Marine forces delivered a powerful response to the Iranian assault of the USS Samuel B. Roberts. A hidden Iranian mine had struck the frigate in the open waters of the Persian Gulf on April 14, 1988. No sailors died, but several were injured and the ship was severely damaged.


But that was all on April 18, 1988. Back when the United States believed in delivering swift, decisive responses to enemy provocations. Here is an excerpt from the April 19th, 1988 Chicago Tribune: Reagan warned Iran later Monday not to continue to threaten U.S. interests in the region. “We undertook this action to make sure the Iranians have no illusions about the cost of irresponsible behavior,” the President said.

The U.S. attacks began with the shelling of the oil platforms Sirri and Sassan, in southern gulf waters, about midnight Chicago time and continued for nearly eight hours, according to administration officials. They said the two platforms were manned by Iranian Revolutionary Guards and were used as radar- equipped military command and control centers.

“At the time of the engagement, an Iranian missile boat approached our ships with obvious hostile intent,” (Defense Secretary Frank) Carlucci said. “It was warned off, neglected the warnings, . . . (was) engaged by U.S. ships and has been sunk.” 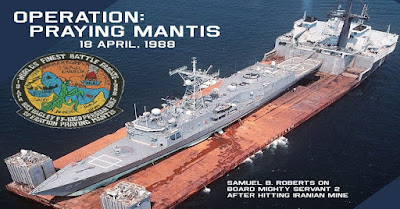 As the USS Samuel B. Roberts (FFG 58) limped away from the minefield on April 14, 1988, Navy divers recovered other mines whose serial numbers matched the ones found aboard the Iranian minelayer Iran Ajr several months earlier.

TIMELINE: All times approximate, and given in local Persian Gulf time. Ship photos by U.S. Navy.

First light: The Roberts’ SH-60 helicopter, now flying from the USS Trenton (LPD 14), lifts from the deck of the amphibious transport dock. The aircraft, call sign Magnum 447, heads off to give the targets a final visual check, and to stand by to evacuate wounded troops.

8:00 a.m.: A few minutes after delivering a radio warning, the destroyers of Surface Action Group Bravo open fire on the Sassan oil platform, which was being used by Iranian forces as a command-and-control center for attacks on Gulf shipping.

8:05 a.m.: The ships of Surface Action Group Charlie open fire on the Sirri oil platform, which is being used to control Iranian maritime attacks.

9:25 a.m.: Twin-rotor CH-46 helicopters deliver U.S. Marines to the Sassan platform, where they collect intelligence and set demolition charges. Plans are scratched to send Navy SEALs to the Sirri platform, which was set afire by the bombardment. 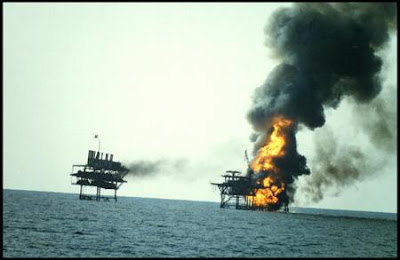 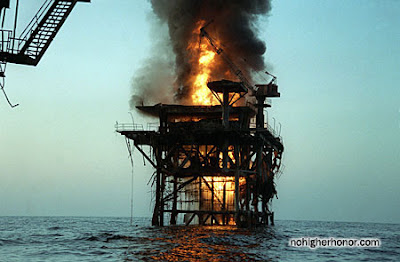 11:30 a.m.: The Iranian patrol boat Joshan ignores radio warnings and approaches SAG Charlie. About 45 minutes later, Joshan fires a U.S.-made Harpoon missile — the remnant of a pre-Revolutionary arms purchase by the Iranian shah. Some 13 miles away, the U.S. ships fire chaff and dodge the incoming weapon. They return fire with Harpoons and Standard missiles, sinking Joshan in the world’s first missile duel between warships.

12:50 p.m.: A pair of Iranian F-4 fighters approach the cruiser Wainwright, which chases them off with a pair of Standard missiles.

1:30 p.m.: Iranian Boghammar speedboats attack the Scan Bay, a Panamanian jack-up barge with 15 American workers in the Mubarak oil field off the United Arab Emirates. Through a lengthy commo hookup, President Reagan himself authorizes a strike against the boats — the first time U.S. forces had intervened to stop an attack on a non-U.S. flagged vessel in the Gulf, and a harbinger of a formal policy to come. Two A-6E Intruders and an F-14 Tomcat are dispatched to attack; SAG Bravo provides a vector.

2:25 p.m.: The A-6s sink the lead Boghammar with Rockeye cluster bombs. Four other boats flee to the Iranian-controlled Abu Musa island and beach themselves.

5:15 p.m.: The Iranian frigate Sabalan fires at an A-6, which dodges the missile and returns to drop a 500-pound bomb down the ship’s exhaust stack, leaving it dead in the water. Top U.S. defense officials in Washington, who are monitoring the fight, decide not to sink a third Iranian warship. They tell U.S. ships and aircraft to lay off Sabalan, and Iranian tugs eventually tow the damaged frigate back to the Bandar Abbas naval base. 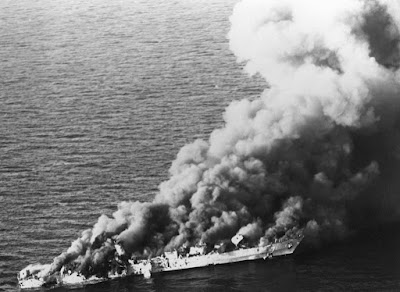 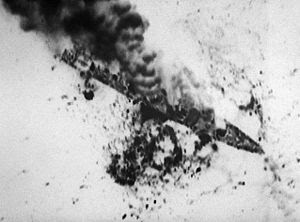 The United States Navy clashed with Iranian forces across the southern half of the Persian Gulf today, crippling or sinking six armed Iranian vessels. One American attack helicopter was reported missing. The attacks began when six American ships destroyed two Iranian oil platforms in what the Reagan Administration said was retaliation for the mining that damaged a Navy vessel last week.

The worst fighting between Iranian and American forces coincided with heavy clashes in the Persian Gulf war between Iran and Iraq. In that land battle, Iraqi forces assaulted the Iranian-held Fao Peninsula at the northern end of the gulf. Iraq maintained that its forces were retaking the small peninsula, which has been in Iranian hands for two years.

U.S. Denies Aiding Iraq Iran has been able to use the peninsula as a launching base for Chinese-made Silkworm missiles aimed at Kuwait. It has also used its presence there to threaten Basra, the key Iraqi city near the Iranian border.

Iran asserted that American helicopters were aiding Iraq in the Fao Peninsula attack, but United States officials, including Defense Secretary Frank C. Carlucci 3d, said this was not true.

The State Department's chief spokesman, Charles E. Redman, said the United States did not know of Iraqi actions at Fao beforehand, nor did it notify Iraq in advance of its intended strikes in the gulf. ''There is no linkage or connection between these two events,'' he said. Heavy Iran Casualties Reported 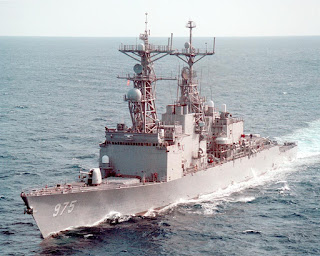 The attacks on the Iranian oil platforms, ordered by President Reagan, set off a stepped-up series of attacks and counterattacks. Iranian casualties were believed to have been heavy. The official Iranian press agency said there were deaths and injuries aboard the oil platforms attacked, but it gave no numbers.

Late today, the Pentagon said that one American Cobra helicopter was missing with its two-man crew. The Iranian press agency said one American helicopter had been shot down by Iran's navy

''We've taken this action to make certain the Iranians have no illusions about the cost of irresponsible behavior,'' President Reagan said today. ''We aim to deter Iranian aggression, not provoke it. They must know that we will protect our ships, and if they threaten us, they'll pay a price,'' he said.

Congressional leaders, who were consulted by the White house before the military action began last night and kept closely informed today, largely supported President Reagan's action and called it a justified response to Iran's renewed mining off the gulf.

''There will be no fight as long as they keep consulting,'' said Representative Tony Coelho of California, the House Democratic whip, who has been a frequent critic of the Administration's foreign policy.

The clashes between Iranian and American ships and planes occurred at several locations, and expanded as Iranian forces attacked or threatened American warships, an oil tanker flying the British flag, an oil platform operated by an American company in the Mubarak oilfield off Sharjah, and a commercial supply ship flying the American flag. 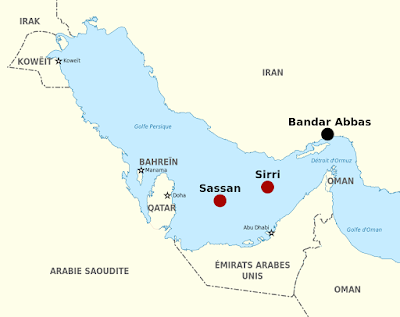