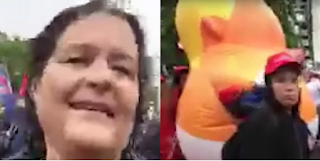 The British “Trump is a baby” balloon is no more — stabbed to death on a London street. A pro-Trump Briton identified as “Based Amy” took a sharp object to the small blimp in Trafalgar Square and watched it quickly deflate as she took a video selfie of her case of Direct Action.

“That’s a disgrace, it’s a national disgrace, the president of the United States, the best president ever,” she says on her video. After she had stabbed the balloon, which has graced protests at both of President Trump’s visits to Britain last summer and this one, she exulted that it was “going down, baby.” She held up her hands and noted that one was “bleeding quite badly though.”

The video, which runs a little less than two minutes also shows “Based Amy” being arrested and escalated into screams as police try to control her body while she is trying to hold up the phone and tape everything. “Hey America, help me. People are assaulting me,” she says.

The activist, whose real name is Amy Dallamura, live streamed both the stabbing and her own arrest on Twitter via Periscope. As she walks away from the scene, she can be heard saying “Yeah, baby!” in the style of fictional icon Austin Powers.

An avid participator in protests, Dallamura kept the camera recording up until she was arrested. The Periscope video shows an officer stopping and searching her, and then Dallamura is arrested for carrying the sharp object that she used to stab the balloon.

As she is being arrested, Dallamura can be heard saying, “America help me!” The balloon was eventually patched up and reinflated. Meanwhile, Americans and Brits alike tweeted about Dallamura’s incident.

Many tweets referenced her bleeding hand, which Dallamura likely nicked on the instrument she used to puncture the balloon. User @trawlerhorse called her a “national hero” for attempting the pop. “Thanks for taking that horrible insult down, you are a National Hero, Get that hand seen to though Darling,” @trawlerhorse said. 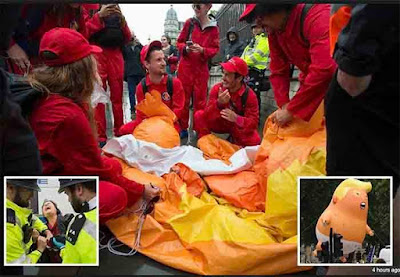