(Anna Giaritelli article from the WASHINGTON EXAMINER on 16 June 2019.)

EAGLE PASS, Texas — Border Patrol agents in Texas are somewhat concerned about being exposed to Ebola by a migrant fleeing the Democratic Republic of the Congo for the United States, but more agents are worried about other illnesses frequently popping up among detainees at stations across the southern border, according to union representatives.

Border Patrol’s holding facilities in the Del Rio and El Paso sectors, or regions, are inundated with sick detainees, as well as sick agents. Jon Anfinsen is a National Border Patrol Council vice president and based in Del Rio, which includes Eagle Pass, where most Congolese are arriving. Anfinsen represents approximately 1,000 agents who are based out of 10 regional holding stations. Anfinsen has been an agent 12 years and said the number of people in custody and subsequent illnesses among that population is “unprecedented.”

“Scabies, chickenpox — we had one case of the mumps here in Uvalde. I wanna say we had measles — plenty of the flu, plenty of colds, body lice, just assorted. And some of these things, they spread like wildfires when you get into a cramped holding cell. It happens,” Anfinsen said.


The continuous breakouts — in part caused by the overcrowded conditions in facilities and difficulty quarantining each sick person — are taking both a physical and mental toll on agents. “It’s not so much the workload. It’s the constant illnesses. We have a lot of agents who are sick. The other day I talked to agents from four different stations. And every single of them had a cough,” Anfinsen said.

“I’ll go and I’ll help process. There was one day I spent processing and we had like 40 Guatemalans and Hondurans, and most of them had some kind of cough. And sure enough the next day, I’m sick — for a week,” he said. “It’s become the new normal, and you gotta just keep going and do your job because you can’t just not process them.”

National Border Patrol Council vice president and agent in El Paso, Wesley Farris, said the breakouts rarely stop, they just dwindle down for a period. “It’ll go in waves. Scabies — strep throat was the last one. Strep throat happened at the Santa Teresa station [in New Mexico]. It was everywhere,” Farris said. “Active tuberculosis comes in fairly regularly. We had an incident of H1N1, swine flu, in Clint [Texas] with a juvenile. And then the ones that are most disruptive are the simple ones: regular flu or lice.”

Union officials in El Paso have urged the sector’s 2,500 agents to wear gloves and face masks whenever possible. Neither official could provide confidential data on the amount of agent sick time used in order to see the brevity of sickness claims among Homeland Security employees.

Farris said the sector has harped on taking basic precautions to stay healthy, but said they are not enough, especially as populations from other parts of the world, including Africa and Asia, continue to arrive at the southern border at rates higher than previous years, bringing with it mild and possibly more serious types of illnesses that are not native to the U.S.

Farris said if he had his way, he would bring in physicians from the Centers for Disease Control and Prevention as a proactive measure. Both officials said migrants are currently screened after being taken into custody and transported from where they were found to a Border Patrol station. Some agents will ask migrants while they are in the field if they need medical help and will then acquire additional transportation if it is needed.

Once back at the station, either Border Patrol EMTs, medical personnel from the Coast Guard, or contracted doctors and nurses will take each person’s vitals and examine them for signs of illness. If a person is deemed to be in good standing, he or she will be released into a holding cell with others. All others will be sent to a hospital. Following hospital tests and possible treatment, the detainee is turned back over to Border Patrol. Quarantining is difficult because of the lack of space at stations, both men said.

Border Patrol does not do blood work as part of medical intake for incoming detainees. Anfinsen said even if they did do it, there is still a chance they or the hospital could miss something that is premature to be showing up in the blood.

The El Paso official said the contracted medical professionals and Coast Guard officials are doing their best, but deserve additional resources because of the risk posed to the general public by the release of hundreds of thousands of people this year.

“If I was running the ship, I would make medically screening people a higher priority,” he said. “At least 90% of people coming into this sector are coming in at one spot. I would get ahead of the game and set up what you call a hot zone — have medical right there.”

“We’re civil servants. It’s what we’re supposed to do in that regard — make sure we at least know [a person’s background]. We do it on the criminal side — we won’t release a criminal if they have an active warrant. We’ll check that. But we’re very reluctant to quarantine them medically,” he said.

Last week, the CDC announced the activation of an emergency operations center in an effort to help with the Congo's Ebola outbreak, the second-largest in history. Farris said if the CDC is jumping in to help with a major outbreak overseas, the U.S. agency should “absolutely” deploy some resources to the southern border.

“You’re going to have to sift through thousands before you get one [major disease],” said Farris. “That’s my nightmare — that somebody does get sick — because I’m going to have to make the funeral arrangements. And it’s not going to be an agent, it’s going to be his 3-year-old kid at home who contracts Ebola or H1N1 because they’re little.” 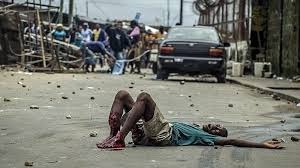 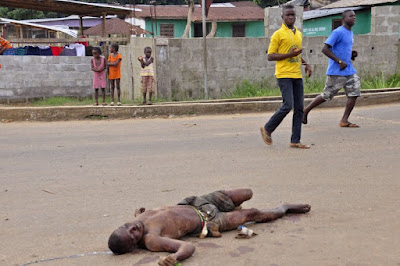 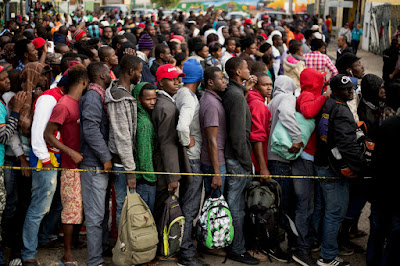 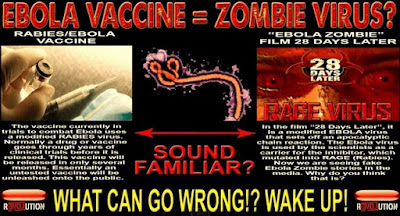 Officials in Texas and even Maine are scrambling to absorb the sharp increase in African migrants. They are coming to America after flying across the Atlantic Ocean to South America and then embarking on an often harrowing overland journey.

In one recent week, agents in the Border Patrol’s Del Rio sector stopped more than 500 African migrants found walking in separate groups along the arid land after splashing across the Rio Grande, children in tow.

That is more than double the total of 211 African migrants who were detained by the Border Patrol along the entire 2,000-mile (3,200-kilometer) U.S.-Mexico border in the 2018 fiscal year. “We are continuing to see a rise in apprehensions of immigrants from countries not normally encountered in our area,” said Raul Ortiz, head of the U.S. Border Patrol’s Del Rio sector. 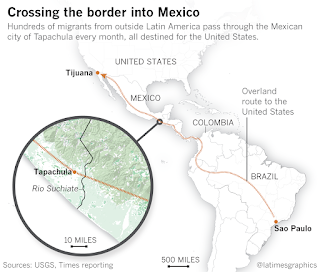 On recent Saturday in Tijuana, there were 90 Cameroonians lined up to get on a waiting list to request asylum that has swelled to about 7,500 names. Also on the waiting list are Ethiopians, Eritreans, Mauritanians, Sudanese and Congolese.

Cameroonians generally fly to Ecuador because no visa is required and take about four months to reach Tijuana. They walk for days in Panama through dense jungle, where they are often robbed and held in government-run camps. They come from Cameroon’s English-speaking south with horrifying stories of rape, murder and torture committed since late 2016 by soldiers of the country’s French-speaking majority, which holds power.

A few days after the big groups of African immigrants were apprehended in Texas, federal officials dropped off dozens of them in San Antonio. Officials in the Texas city sent out a plea for French-speaking volunteers for translating work “and most importantly, making our guests feel welcome.”

Many were bused to Portland, Maine, about as far as one can get from the Mexican border and still be in the continental United States. Word has spread among migrants that the city of 67,000 is a welcoming place. Somali refugees were resettled in Portland in the 1990s.

A total of 170 asylum seekers arrived in recent days. Hundreds more are expected in an influx that City Manager Jon Jennings called unprecedented. With one shelter already full, a basketball venue called the Portland Exposition Building was converted into an emergency shelter. Portland officials tweeted Thursday that rumors some of the migrants are carrying the Ebola virus “are patently false,” and said that as asylum seekers, they are in the United States legally.

The explosion in immigration to the United States from sub-Saharan Africa coincides with a steep drop in the migration flow across the Mediterranean to Europe after European countries and two main embarkation points — Turkey and Libya — decided to crack down.

From Jan. 1 to June 12, only 24,600 migrants arrived in Europe by sea, compared to 99,600 over the same period in 2017, according to the International Organization for Migration. But IOM spokesman Joel Millman doubts the migrant path for Africans has swung over from Europe to America. 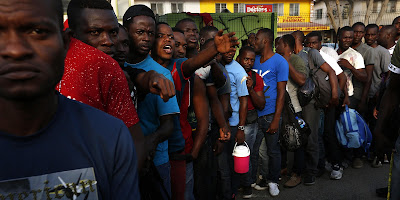 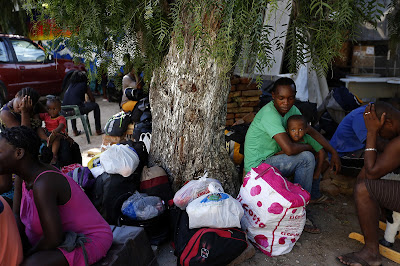 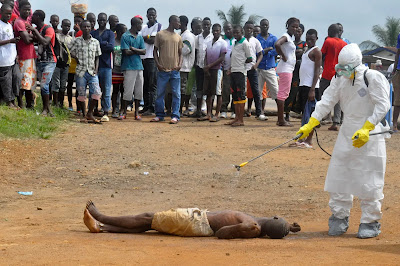