(Compilation of news articles from various Japanese sources on 12 July 2014.)

A Saudi Graduate Student Vandalized & Destroyed four Ancient Buddha Statues in Sensoji Temple of Asakusa Suburb in Tokyo. It was a typical case of Sudden Jihad Syndrome commonly infected many Muslim males all over the world as all those Muslims have innate hatred towards Buddhists and Buddhism.

A Saudi graduate student vandalized and destroyed several ancient Buddhas that were designated as important Japanese cultural symbols in downtown Tokyo. One of the statues was 300 years old. The incident happened around midnight. The man said he carried out a similar attack at another temple.

This was what NHK had reported on June-12:

A Saudi Arabian man has been arrested for vandalizing Buddhist statues at a temple in downtown Tokyo. Police say they received an emergency call about a foreigner behaving violently at the Sensoji Temple in Asakusa, Taito Ward at around midnight on Wednesday May-11.


They say officers who rushed to the scene found four Buddha statues lying broken on the ground. Police say they questioned a 31-year-old Saudi Arabian graduate school student nearby, and the man admitted that he had destroyed the statues.

The vandalism involved 3 stone statues measuring 60 to 100 centimeters tall and a 200-centimeter tall bronze one that was made about 300 years ago. It has been designated as the ward’s significant cultural property.
Police say the man told them that he has conducted similar vandalism at another temple. 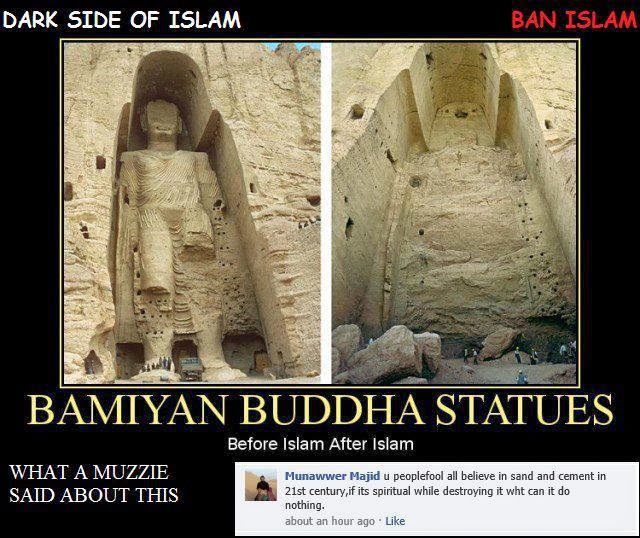 The lunacy of Multiculturalism has never infected Japan, so it’s a surprise to find a TV report about an incident of culturally enriched vandalism there. It’s also interesting that NHK, the Japanese state broadcaster, makes no mention of JIM when discussing the destruction of statues of the Buddha by a Saudi grad student:

Al Ahram has a report on the incident:

Senso-Ji temple is a Buddhist temple located in Asakusa, Taito, and Tokyo. And the temple is considered Tokyo’s oldest temple, and one of its most significant. The Saudi citizen, who was arrested by Tokyo Police department, is currently being investigated for reasons behind his action.

The incident caught the attention of moderate Muslims, and therefore a hash tag was trending on twitter #saudi-destroyed-statues-in-Japan, Saudis condemned the actions of the Saudi citizen, saying he should respect other’s beliefs and religions.

A man was arrested late last night for destroying four Buddhist statues, one of which was a Significant Cultural Property.

According to news station NHK World, the vandal was a 31-year-old graduate student at Keio University and a national of Saudi Arabia. Police received calls on Wednesday night with reports of a “foreigner behaving violently” around Sensoji Temple in the Asakusa area of Tokyo.

When police arrived, they found four broken statues: three of them were made of stone, and one, designated as a Significant Cultural Property, was a 200 cm bronze that is approximately 300 years old.

After being arrested, the man admitted to the crime and said that he had committed a similar attack in another temple; police are currently investigating the student’s report. According to Ahram Online, moderate Saudis have “condemned the actions of the Saudi citizen” as intolerant and disrespectful.


Sensoji Temple, located in Taito Ward, is one of the more recognizable tourist destinations in Tokyo.


Related posts at following links:
Saudi Arabia Beheading The Buddhists
Posted by Hla Oo at 1:38 AM